The organized assault on Hindu beliefs happens in the name of Rationalism.

The recently held demonstration by Periyar’s party wanted to show

that that acts like piercing the tongue (alagu kutthudhal)

that there is no divine intervention in them.

Be that as it may. 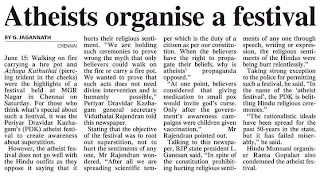 But Hinduism or God-realization is something beyond these

and it can not be understood

if one fails to grasp the rationale of the many practices of Hinduism.

(Ironically both the believers and non- believers in God -

While I was thinking of how to deal with this issue,

flash came in my mind another write-up

There is mention in that about how ragas are said to make certain things happen.

For instance, certain ragas are said to attract rains.

But when a concert was arranged to play that raga,

no rains came and instead a dry- spell continued for a month!

However the writer of that piece,

there must be something more than the raga to attract rains.

Perhaps the mental nature of singers and listeners also mattered.

One must understand that Hinduism shows the way for all kinds of possibilities.

When Creation started, everything was self- contained in it in such a way

that one gave rise to another.

This made possible the wheel of evolution continuing for ever.

This is the import of ’s verses in Gita

on how he created Brahma with yajna.

Nothing is impossible in this universe.

Whatever one wishes, one can get – even if is means becoming God Himself.

Becoming God is the Ultimate level of fulfillment,

that is variously explained by Achraya purushas.

They differed only the nature of such attainment –

whether one becomes one with God or

But they all showed

(and the Final message of Vedantha is also)

that one can attain God and

God-attainment must be one’s ultimate goal of series of births.

The route for such attainment is what spiritualism is all about.

When attainment God Himself can be a reality,

there can not be any difficulty in achieving things of physical endurance.

Piercing the tongue and other modes of distressing the body

can be done by anyone – a believer or non-believer.

But both of them must have developed

a certain level of mental endurance to bear the stress.

The believer does it by looking inward on God.

The non- believer also does it by looking inward –

by concentrating on his own mind.

So there are two things involved in these acts –

a physical endurance coupled with a mental conditioning.

When that mental conditioning is directed to the Almighty,

the person will be inching towards that Almighty.

It is like ‘you get what you think of’.

or by concentrating on any god.

A simple way to understand this is by

a comparison between Yoga and physical exercise.

Any physical exercise will give good results.

but why yoga is recommended over physical exercise?

It is because in yoga, the mind merges with the body.

The combined work of body and mind brings out far better results.

done in combination with a mental feeling (here on God)

When the thought is on God as a superior power and

remover of all problems,

the doer gets results accordingly.

Such acts are not new in Hinduism.

There had been more severe acts recommended as penance.

Arjuna did one such penance with 5 agnis around him –

with fire on four sides and sun as the 5th fire above him.

There had been many siddha purushas

who had themselves buried in the ground and

had come out un harmed.

All these were possible due the involvement of ‘mind’.

But Hinduism and religious texts actually do not recommend such practices.

Only mental communion with God

had been the central theme in all acts of God realization.

Yet these acts had gained relevance, for,

they too have some utility.

Everyone is not capable of communion with God,

Each one grows by himself and on his own experiences.

The faith first develops with prayers for mundane benefits and

then for knowledge which leads to awareness of how to condition oneself.

It is like how one will show the pole star to the one who does not know it.

First one has to show the direction,

show the other prominent stars in the vicinity

and then lead one to the sapta rishi mandala in the shape of Big dipper,

then show the pointers at one arm

and then direct the person to extend the arm to locate the pole star.

Knowing the highest God also happens in such steps only.

Prayers, execution of committed acts and the like are stepping stones

in the souls’ journey to attainment of God.

The skirmishes by the atheists also will help them in due course,

Because they spend more time thinking on god.

That thought also has to give its relevant result to them –

may be in a future birth

by putting them in a journey towards God Realization!!