that Diploma in Astrology offered in Tamil, English and Hindi

had been dropped at the insistence of the government. (Karunanidhi).

I checked with the University website and found it removed.

This subject has been there for many years

and was very popular with people.

than in others offered through distance education.

They had a very strong team of teachers

This move to drop must have taken place only recently

after our all-knowledgeable Chief minister changed the Tamil New year.

Even in the last season, (it is offered twice a year in January and June)

I remember seeing the advertisement in the newspaper.

This move by the Chief minister

not only shows his pernicious intentions to slap anything of Hinduism,

but also his lack of grasp of Tamil texts

which he boasts of having learnt or championing for.

(the measurement / calculation of Time)

was popular in Tamil nadu.

Song 229 of Puranaanuru is full of astrological information

that indicated an impending danger to the king.

in the inauspicious direction of South, in the month of panguni

with Uthram shining above head,

to the death of the king.

He says that they were all praying that their king should not fall ill ( causing death),

implying that there was none who could kill him in combat.

But the king died suddenly making the astrological indication true.

for east and west – Prachee and Udeechi.

the ashtami falling on the day of star krittika.(134)

astrological factors were considered for predicting events. (Sutra 30 and 36)

More than anything else,

and in addition to it yezhutthu as (eye).

The eye is the fore most of all parts of the body.

and Astrology is considered as the Eye of Veda purusha.

There are verses to this effect in sastras.

Vedas can not be understood without the Vedangas

And among Vedangas, Astrology or Jyothisha alone was

Thus Thiruvalluvar has only repeated these in his kural as the eyes.

The best way ever formulated by man to record time is by Astrology only.

Karunanidhi stands as the best example for the kurals in

I don’t expect him to change,

because this yuga of Kali is dependent on people like him

to further its yuga dharma.

I only feel astonished

how true it is that

in a democracy people get what they deserve!! 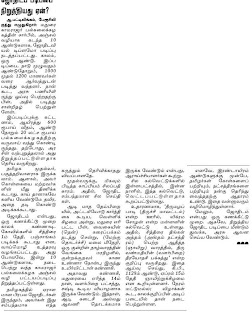 The irony is that, MK will never get away with the Yellow shawl, which he wears based on astrological recommendations. But will be ready to condemn it.

//in a democracy people get what they deserve!!//

but many a times i wonder what we did to deserve this much!

he must realise that not every one can become a politician and people need to earn money aas honestly as possible in as mnay ways aas possible.

as to venkatesh's comment- his hypocracy is so well known, nothing new.

When everyone is expecting Karunanidhi to reduce petroleum and domestic gas prices, his family -run business, RCV is cutting cable TV charges by 50%.
People are getting what they deserve!!