The mystique of Manasarovar

During a pilgrimage to the holy Mansarovar lake and , I remember eagerly seeking a sighting of the crow sage — Kagbhushandi — with an anticipation that it will be my first direct encounter with the Supreme Power. As the legend goes, Kagbhushandi was a very learned (but proud) sage who believed that he was better than his own guru.

However, Lord Shiva cursed him and he had to take 100 rebirths before he could get rid of his illusion and ego. On the banks of the Mansarovar, Kagbhushandi, coming out of his lengthy curse, had narrated his story to Garuda. Garuda too had an illusion that he was greater than Lord Ram because he had saved him from the “nagpaash.” It is believed that whoever visits the Mansarovar lake, gets rid of all wordly illusions and pride.

Earlier, as I was leaving , I was told that if I get a darshan of Kagbhushandi, I would experience enlightenment. As we approached the Mansarovar lake, suddenly I spotted a big black crow with a red beak. By the time I reached out for my camera, it had vanished.

I was in Mansarovar for three days and during that time my mind was completely at peace. I had no wishes, no worldly preoccupations there. It was such a humbling and exhilarating experience. Early one morning, I also had a sighting of the devatas (in the form of stars) coming for a divine dip in the holy lake before returning to the heavens.
All the three days that I was there, time came to a standstill.

I experienced total tranquillity. This communion with the Supreme Being has become the most treasured moment of my life. It is like that spiritual wonderland which is always there for me, to comfort and reassure me that everything will be fine. Whenever I am not satisfied, lonely or in pain, I think of that uplifting experience at Mansarovar and get recharged and ready to face the world again.

— Anju Poddar is a Hyderabad-based writer 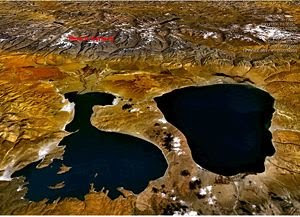 Email ThisBlogThis!Share to TwitterShare to FacebookShare to Pinterest
Labels: God and I, Hindu awakening