It is an attack on . 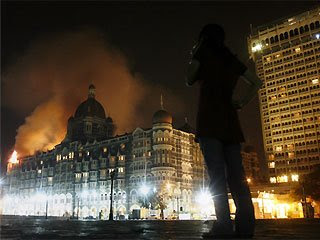 It is the price we are paying for having a government

that is soft on terrorism and knows nothing other than the vote bank.

The anti terror activity is too busy to an extent

to ‘invent’ Hindu links to the previous attacks,

that the threat- call to finish the ATS chief was just ignored as a hoax.

the real terrorists have happily gone ahead with their agenda.

The ATS Chief is finished, so also the Nation’s faith in its Government.

My kids wondered how come every important city of had been attacked,

(or at least has been on the hit-list)

while our Singaara – Chennai is spared!

from those across the to the home-grown ones,

nor oppose terrorists of any outfit.

for the present crisis in Mumbai,

have had links to or groomed in camps in TN.

Tamilnadu is certainly safe, thanks to Mr Karunanidhi’s policies!

An anonymous caller, who used a PCO to contact Pune police, threatened to blow up the residence of Mumbai Anti-Terrorism Squad (ATS) Chief Hemant Karkare "within a couple of days", a top official confirmed on Wednesday.

The caller who spoke a few lines in Marathi on November 24 evening cut the line after giving the threat, Rajendra Sonavane, Joint Commissioner of Police (JCP), told PTI.

The call was later traced to a Public booth in Sahkar Nagar area of the city, he added.

Asked whether it was being seen as a 'hoax', Sonavane said police were taking all such threats seriously in the present scenario and the Mumbai ATS had been informed duly about the threat call.

However, the police control room, when contacted on Tuesday night, had denied receiving any such threat to Karkare.

Timeline of Attacks in India

March 12, 1993: A series of thirteen explosions in Mumbai, then called Bombay, resulted in 257 deaths and over 700 injuries. The blasts were orchestrated by the organized crime syndicate called the D-Company, headed by Dawood Ibrahim.

Dec. 13, 2001: Attack on the Indian Parliament complex in New Delhi led to the killing of a dozen people and 18 injured. Pakistan-based terror groups were blamed for the attack.

July 5, 2005: Militants attack the Ram Janmabhoomi complex, the site of the destroyed Babri Mosque at Ayodhya in Uttar Pradesh.

March 7, 2006: A series of bombings in the holy city of Varanasi killed at least 28 and injured 101. Indian police put the blame on some Pakistan-based terror outfits.

July 11, 2006: Seven bomb blasts occurred at various places on the Mumbai Suburban Railway, killing 200. Investigations revealed that terror outfits with a base in Pakistan were behind the blasts.

Sept. 8, 2006: At least 37 people were killed and 125 were injured in a series of bomb blasts in the vicinity of a mosque in Malegaon, Maharashtra. The blasts were followed by an explosion and most of the people killed were Muslim pilgrims. The students Islamic Movement of India was responsible.

May 18, 2007: A bombing during Friday prayers at Mecca Masjid, Hyderabad, killed 13 people. Four were killed by Indian police in the rioting that followed.

May 26, 2007: Six people killed and 30 injured in a bomb blast in India's northeastern city of Guwahati.

Aug. 25, 2007: Forty-two people killed and 50 injured in twin explosions at a crowded park and a popular eatery in Hyderabad by Harkat-ul-Jehad-i-Islami (HuJI) activist.

May 13, 2008: A series of six explosions tore through Jaipur, a popular tourist destination in the Rajasthan state in western India, killing 63 people and injuring more than 150.

July 25, 2008: Seven blasts in quick succession across the south Indian tech city of Bangalore killed one and injured more than 150 people.