Origin of the name ‘Kaaveri”

The river Kaveri was originally known as 'Kaverikanyaka' and

was brought from the mountains (Brahmagiri) by a Chola king. 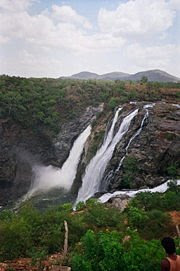 tracing the genealogy of Cholans.

"(V. 35.) Having come to know that king Bhagiratha engrossed in penance brought down (from heaven) the river of gods (i.e., Ganga) (to earth), this king (also) desirous to fame brought her (i.e., Ganga) to his dominions under the name Kaverakanyaka (i.e., Kaveri).[1][25]"

the king mentioned here is Chithradhanvan.

The text of the inscriptions can be read at

also written in my blog

The Choodamani nigandu verse for kaveri is this.

Other names of KaavEri are given as 'ponni' and 'kaviri'.

since the river meanders through poonjolai (as in Srirangam) 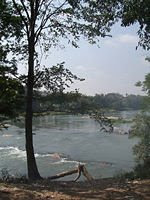 But original name is kaveri – perhaps an idukuri-p-peyar.

Another input from this nigandu:

Kaveri is one of seven rivers of Bharatha varsha.

From this we understand that Kaaveri.had a special place as a Holy river and

was equally revered along with Saraswathy, Ganga etc.

She is one among the sacred seven.

Kaveri has been associated with bringing prosperity to the land.

is the oft repeated verse in Tamil poems of yore.

isnt there a slight slant towards tamil nadu when you say, Kaveri was brought from the mountains from a chola king :-)

It cant be the later, as this has been regarded as one of the 7 sacred rivers of India.

Further .. if i remember well, isnt cauvery the wife of agastya or somewhat related to sage agastya ? I thought her orgin was related with sage agastya than a chola king.

Kaveri was brought to the land from Brahmagiri hills in the western ghats by the Cholan king. This is recorded in the copper plates inscribed at the time of Rajendra Chola which were unearthed a century ago. Also told in olden Tamil texts. The land wherever Kaveri went belonged to the Cholas, giving them the title 'Kaveri VaLa naadan'

But mythological stories such as the one on Agasthya and Kaveri contain symbolism and presentation of happenings in a veiled way.

One such story involves the marriage of Kaveri with Agasthya.
Kaveri's father in that episode was Kavera.The mention of Kaveri as Kaverakanyaka (daughter of Kavera) in the Copper plates does tally with this narration.
The rivers birth place details also tally with those mentioned in the story.


That is, Kaveri at it is inception even today is only an underground spring in the mountainous area. After appearing at Brahmagiri, she goes underground. This tallies with the story of Agasthya having her contained in the kamandal. This kamadal episode seems to be a symbolic description of not flowing as a river and being contained within the mountain.

How she bursts out as a river to help humanity is another part of this myth. This tallies with Cholan efforts to bring her to land! Vinayaka as a crow made this happen as per the myth. I have already covered in one of the posts on how Vinakaya is the lord of ganas - of the created particles when the sun was born as the third generation star!(in the context of navagrahas I wrote this. please browse the blog). Whenever and wherever the ganas (the elements)are giving trouble or are needed to be controlled or influence, Vinayaka's presence is needed (Vinayaka as some form of energy etc)

This is perhaps what has been recorded in the copper plates and told in the texts. The breaking of the trapped areas at the behest of the Cholan king and with the divine blessings of Vinayaka could have made this happen. Today kaveri reappears 3 km away from he resource. Perhaps it is this place that was opened by the Cholan king that facilitated the river to flow down the hills and travel on the plains.


From the copper plates we know that this period tallied with Bhageeratha's bringing down of the Ganga. This happened in Threta yuga which in my opinion of calculation of the round of the zodiac by the sun's precession of 28,800 years, happened 10,000 years ago, after the time ganga also descended due to the melting, at the end of the last Ice age (which began 15,000 years ago).

But there is another Agasthya connection to Kaveri after the close of Kali yuga.
We don't know whether there is one Agasthya or many Agasthyas of the same lineage. He brought 3 groups of people from dwaraka when it was getting flooded. I have detailed about this in many posts. He settled them in Brahma giri hills too!

It must be noted that those were the times no kannada or kerala naadu existed. What is now Kerala was ruled by the Cheras. What is now Karnataka was the land that was occupied by the settlers called 'VeLirs" brought by Agasthya from Dwaraka. They spread to the present day Kerala too.The 'kadai yezhi vallalgal' (the last 7 patrons / philanthropists) were not Tamil kings. They were all these Velirs only. They setteled from the south of western ghats till Kudremukh in Karnataka.

There was one Aruva naadu in the source of Kaveri, ruled by an Aruva king and occupied by Agasthya. This is mentioned in a verse in Purananuru that glorifies this Aruva king. No researcher or writer on Purannuru has so far had any idea of this king. But if we know Agasthya's role as told in the commentary by Nacchinaarkiniyar, we can understand as how I am saying now. It is to be noted here that Aruvalars were a group of people who were brought by Agasthya from Dwaraka. Aruvalars were a lower starta of people whereas VeLirs were higher strata of people in Dwaraka. Paari was a Velir. Began was Velir. But they were all hated by the Tamil kings. They were all not accepted by the Tamil kings.


The Agasthya connected to this time period may be a descendant of the family of Agsthya surname! We don’t know.


These settlements came after Bharatha war - after the global inundation (yuga-prayala) in which Indian places like Dwaraka, miles of vast lands of Pandyan's Kumari kandam, Hasthinapur etc were lost in floods. This is the time a rejuvenation of Tamil lands took place under the guidance of Agasthya and adapted later by Tholkaappiyar when we came to have 5 types of land forms with Mullai (forest tracts) coming to follow Krishna- Balarama cult.


About your next query.
Though Kaveri is one among the sacred seven, there is no tradition that says that she has come from heavens like the Ganga. Only Ganga has been mentioned and glorified as having come the heavens and moving through all the three worlds. Kindly browse my blog on this in my posts on Rams Sethu/ Ramayana.

About your last query, the name Lopamudra has been associated with Agasthya as his wife. They are described as one of the inseparable pairs. Read more in my post on Arundhathi.
Their original land was Uttar Kuru, what is now Russia/ Siberia. Agasthya migrated to the South at the time of Shiva's marriage in Kailasa - coinciding with the geological caving in at the foot hills of Himalayas due to plate movement. We don't know whether this Agasthya has existed at all times - and periodically getting associated with events, one such being his marriage to Kaveri - or different Agasthyas existed at different times. But the Agasthya of the later period (after dwaraka inundation) settled in Pothigai hills near Madurai.

My 2-cents on Ganga being bought from Heaven (Vishnu-lokam to be precise - since She was flowing in the foot of Bhagavan Vishnu):

Could it be that a Comet (from a different galaxy) and laden with a huge icy-core hit the Himalayas and get embedded as a Glacier (Gangotri) or that a huge Meteor hit the frozen area near Gangotri which caused the glacier to start melting?

Comet hit??
Going by the description on Ganga’s descend,
I don’t think such an event triggered Ganga’s birth.
Described in http://www.valmikiramayan.net/bala/sarga35/bala_35_frame.htm
If such an even had happened, it would have found mention in the Ramayana.

Ganga is said to travel in 3 lokas,
First she shoots upwards (heaven-ward – the Gaumukh perhaps was an advancing terminal point of Gandgothri in the initial period. Now it is time for retreat and ganga will be lost after 4000 AD) and then comes down ferociously that only Shiva can control her flow.

In reality she does pass through spiraling path ways (equated to locks of Shiva’s hair) which reduces her speed. Once she touches the ground, she is said to enter Vishnupada – bhoo loka. From there she moves into the dug -expanse which is equated to the underworld. Please refer my posts on Ram Sethu and Ganga. The description is Valmiki Ramayana indicates that the vast trough caused by the 60,000 persons (Sagaras) is now Bay of Bengal. She moves in that and reaches the mound of ash at Rameshwaram where her first act as a sin-remover happens. All these have been covered in detail in this blog.


Coming to your comment, pada means division and entire earth is ‘Vishnu pada’ – Vishnu’s division or Vishnu’s ‘gemba’ – or Vishnu’s area of operation.
The Bhoo, Sri and nila are all about earth with its atmosphere and magnetosphere
which are lorded / influenced by Vishnu who is present everywhere.

All the mythological descriptions can be interpreted in some rational way.
The Ganga’s birth can be interpreted by incorporating the geological evolution of the earth.
Ganga’s formation tallies with end of Ice age.
The warming globe had resulted in the burst of glaciers such as Gangothri. If there is any comet-hit, a corroborative mention must have been made in the texts. But such an indication is not found associated with Ganaga’s birth.

From the description in Ramayana, it is deduced that Ganga had its origin in Himadri- the oldest and the tallest ranges of the Himalayas.
Initially the water from her had sprung upwards with tremendous force in such a way that when she actually started descending the mountains, it would have seemed as though she was coming down from the sky (heavens).

Hindu texts contain an abundance of information about this earth and man’s evolution and progress (even about cosmos). But unfortunately, the Indians have not realized their rich past and are of the opinion that man’s history started only recently in the last 5000 years. The Yuga- pralaya that happened then had erased memories and traces of our past. Fortunately our traditional texts which are handed down mostly by memory and revived by rishis periodically are with us as guides. It is left to out sincere efforts of selfless and spiritual exploration to unravel or understand our past and its history and pass on to others.

Thanks for the details.

No mention please. Questions and thoughts such as the ones you have expressed are helpful in probing deeper from different angles. Together we can grow in knowledge and awareness in this exercise!

Good information about cauvery
as well as