The trinities and their consorts.

Every name has a significance.

It can be applicable to a specific person / deity

only when that significance is to be highlighted.

If we have to mention the consort of the trinities,

The 'essence' of that is 'saara' (in Sanskrit)

and hence his consort is Saraswathy.

Brahma is in lotus.

Then his consort also must be associated with it.

Sarasija is that which is in saara

That is how his consort is 'Sarasija' and 'Saraswathy'.

So his wife is Saraswathy.

Since he stands for the body of knowledge,

his wife stands for the essence of knowledge

and ways of attaining that knowledge (through vaak)

That is why she is 'naa-magaL'

From Choodamani nigandu we get the other names of Saraswathy

(but this name Saraswathy is not found in this group)

Panuvalaatti (who is about panuval – books )

veN salasamuttraaL (one who is on white lotus)

Or sung by a yajna- purohit called Bharatha)

vaakaaL (who is in vaak)

Perhaps VaaNi is a single word –name of Saraswathy

Same with other trinities too.

Therefore Malai magaL – is the consort of Shiva.

Malai magal is synonym for Vumai

means one who was desisted from her tapas by calling 'Vu, No')

All the synonyms of malai magal or Vumai are connected with the marriage of the two.

are not mentioned as consorts of Shiva, 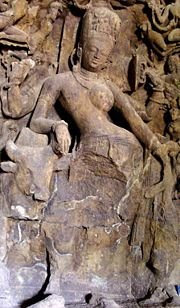 She as a manifestation of Paarvathy is known from

her being the younger sister of Thirumaal.

But she is not of the significance that Malai magal has!

She stands for victory in wars.

Just prior to the Bhagavad Gita,

Krishna asked Arjuna to do Durga sthuthi for victory in war.

He did and Durga appeared and blessed him with victory.

The KaaLi significance also is different from Durga

as how Durga significance is different from Malai magal.

To understand this, jyothisha helps us better.

For any element or essence of that element,

A positive, a negative and a middle one.

In another way it is said as

These are signified by devatas or forces

that are responsible for them / or control them.

These are known as

For instance for the element of Agni as signified by the sun,

The devatha is Shiva

When sun is positively empowered in a horoscope,

the deity controlling that aspect is Shiva.

The person is asked to worship Shiva.

When the sun's position is adverse,

the controller then is Rudra.

The person is asked to propitiate Rudra

since he will minimize the adverse effects.

Agni is the basal quality of the Sun.

This is how the variants of a single deity is interpreted or understood.

She is devata (denoting positive power) for Moon.

Her variant Gowri is Pratyathi devata

controlling the negative side of moon's significance.

When understood in this way,

we will know how the specific significance is to be noted

when interpreting a specific deity or name.

Malai magal or Paarvathy or Uma

is the consort for Shiva!

Similarly for Vishnu, it is Lakshmi or Thirumagal.

Vishnu is he who is spread everywhere.

Also known as 'Thiru' in this nigandu