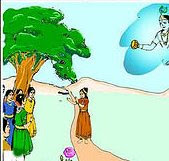 If we probe what this 'parai' was, we would be surprised to know that many types of 'parai' were used in those days, depending on the appearance, occasion and the need.

Going through the instances of 'parai' as found in Sangam literature, we are able to identify the parai that AndaaL had used.

To begin with let us see the meaning of Parai.

pRaidhal has its origins in this word and

it means to announce or declare or convey something.

This paRai as an instrument to convey something was very much part of life of ancient Tamils.

The types are dependent upon the occasion the parai is used and also its appearance and the quality of sound.

They are as follows.

(1) அரிப்பரை :- The sound of this is that of rubbing something on some soft surface (aritthal).

This appears in texts as a comparison with some soft sound, say, the sound of ornaments rubbing with each other.

(2) அனந்தன் பறை :- This has a dull sound but not an auspicious one.

This paRAi is usually beaten by haunted women

who beat this parai after smearing the blood of the dead fallen in the battle field,

Vultures get attracted to this paRai and reach the battle field.

(4) சிறு பறை :- Both these are small in size, can be easily held in hand and used along with singing.

carry this paRai along with 'yAzh' (a kind of light veena that can be hung on the shoulder.)

Both Yaazh and this paRai are used simultaneously or separately while singing.

From different texts of yore,

before sun rise in praise of the king or God.

used at the time of processions and for making announcements.

(6) சாக்காட்டுப்பறை :- This is used only at the time of death.

Is also known as saavu-p-paRai.

(7) செருப்பறை :- This is beaten when the king goes out to the battle field.

This PaRai is carried by drum-beaters

in front of the elephants that go to the war-front.

This is to announce that the king had started for the battlefield to snatch victory.

This paRai was used by the people of Neidhal -

those living on the sea shore.

(10) தடாரிப்பறை :- This is the common drum used by many in the ancient land of Tamils.

This is also known as 'kiNai-p-paRai' or

This is the drum held by Shiva during his cosmic dance.

The image of Nataraja holds this.

This is a big-sized drum, with an eye that resembles the foot of an elephant.

This was used in wars and for making announcements.

Apart from the above,

each of the 5 land forms of the Tamils had

(this is in places ending with the word 'kudi', like sirukudi, kunna-k-kudi etc)

Chenna-p-pattinam – former name of Chennai – belongs to this area.)

From these information, some idea of the kind of parai

that AndaaL has mentioned in her Thiruppavai can be inferred.

At 9 places, the word paRai has been mentioned by ஆண்டாள்

Let us now see what parai was carried by

It was a small and easy to hold drum.

young AndaaL and her friends.

that was characteristic of her land, namely Villiputthur.

(putthoor in the name indicates that the place of AndaaL was in marudham or plains).

which was meant for worship of Shiva and

AndaaL would not have used that for the worship of Thirumaal.

But that was used only during marriages.

So that is also ruled out.

The easy to be held parai

It is therefore proper to assume that AndaaL used Siru parai.

But here again a doubt comes.

Is this the parai she used?

It can not be.

Because from the meaning of 'saala-p-perum parai'.

it is known that it is the big parai (perum parai)

the Salli-p-parai, which is used in processions.

This is indicative of a procession, 'புறப்பாடு '

with all accompanying recitals and auspicious music.

In all probability it is about the கருட சேவை she witnessed on that day,

that is most likely to be the day of வைகுண்ட ஏகாதசி.

In the present context, we know that AndaaL used Siru parai,

AndaaL has also given a clue about what exact message is conveyed by her parai.

which has specific application in Tamil lexicon,

reveals the exact message given by Narayana that

AndaaL along with the aayar girls had been spreading by beating the paRai!

Posted by Dr Jayasree Saranathan at 11:39 AM