Some astro notes on Swathi (Arcturus).

Today moon is crossing the constellation of Swathi.
This day was watched by sages and astrologers in ancient times.
The local atmospheric conditions noted in this day were used for
predicting rains in the rainy season.


Swathi is known as Arcturus, in the constellation of Bootes near Virgo.
In the summer months, Swathi presents a beautiful feast to the eyes
by lining up in the form of an arc
with the handle star of the Big Dipper in the North and
with Spica (chitthra star) in the south. 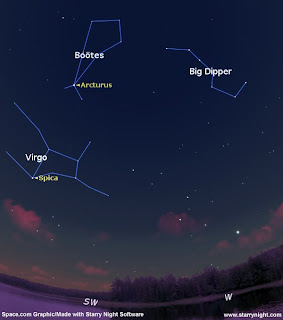 The arc sweeps the entire sky from North to south by ending with Alpha Centauri (proxima Centauri) the nearest star to out solar system.
The beauty of this arc can only be matched by another sweeping constellation,
the Orion, which we can see nowadays after sunset.


Comparison of Swathi with the Sun. 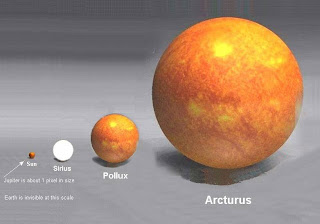 Generally Swathi is regarded as an auspicious star by many people.
But it is not exactly so. It afflicts in three ways.

(1) Swathi is one among 12 stars that must be avoided for undertaking a long journey.

(2) Money should no be given or lent on Swathi day.
If lent, one can forget about it, because it may not be returned.

(3) If one falls sick on this day, the recovery will be difficult.
Particularly, if an ailing old person develops some complication on Swathi day,
the chances of his recovery are remote.

This is all because Swathi is ruled by Vayu, the Wind God.
The nature of Wind can be seen in the persons born in Swathi.
They will be restless and find it difficult to stay in one place.
They will find things unstable and easy to lose.
They may be fierce sometimes like a storm and may be breezy at times.
Things, moods and emotions just don’t stay with them for long.


As a result, most Swathi people would have got tired of fluctuations in mundane life and have developed a state of mind
for non-materialistic or spiritual or religious things.
Most pious persons are born in Swathi.
The avathara of Lord Narasimha was said to have taken place on Swathi nakshathra.
The sudden, stormy and violent disposition is something
that catches one if he is born in Swathi.


It is because of this nature of this day,
sages had watched this day for meteorological changes.
They used to look for a smooth breeze
whenever the ‘garbottam’ (embryo of rains) was in progress
and enough windiness in the times when rains were fructifying.


Swathi rains are rare, for,
the wind lord of this star used to shatter any gathering clouds.
But it must rain on Swathi in the month of Aashada (shukla paksha).
This is the only exceptional day.
This day correlates to Krishna paksha Maargazhi, when ‘garbottam’ happens.

It must rain on Swathi only in Sukla paksha Aashada.
On this day, the day time is divided into 3 parts and
night time also divided into 3 parts (praharas)
and was observed if it rained at any prahara or on all praharas or none at all.
Depending on this, the kind of rainfall for the following rainy season was predicted.
That helped the people in deciding the crop pattern for the ensuing agricultural season.


Just a month prior to the Sukla Aashada Swathi,
it should not have rained in Sukla Jyeshta Swathi.
If it rains in Jyeshta Swathi, the rest of the year will be dry.
The sukla paksha of Jyeshta starting from Swathi till Jyeshta
is known as the ‘Retention’ period of the fetus of Rains!
This is the vulnerable period for ‘abortion’ of the rain-fetus,
for, the winds may bring rain clouds.
If it rains on all or any of these 4 days starting from Swathi in Jyeshta month,
the rainfall in the ensuing season will be much less.


Swathi is watched right from the month of Maaga (Maasi).
The wind god can be in his natural self on the months starting from Maaga.
Windiness, dust storms, thunderous clouds, sun and the moon hidden by clouds
and such other things of Wind’s play can happen and must happen on Swathi days.

If we notice, sudden dust storms happen mostly on Swathi or the 3 days after that.
The winds also bring a mild drizzle on the Swathi day, though such drizzles are rare.
It is said that oysters surface on the sea on Swathi days
as some undetected mechanism propels them to the surface on Swathi.
The rain droplets caught by them on Swathi become the best pearls!


Our ancients have watched and recorded these information
and have passed on the information for posterity.
This kind of knowledge had survived with the masses
who always looked at the sky and the atmosphere to decide
about their cultivation pattern.


For instance if it rained in the 3rd prahara of the night in sukla paksha Aashada Swathi,
cultivation of paddy was taken in the summer.
If it rained so in the 1st prahara, cultivation of paddy was done in autumn!
If cultivation is reversed, it had ended up in losses.
Similarly a number of other parameters were observed in Nature,
(which will be written from time to time in this blog)
based on which cultivation of specific crops in specific seasons were carried out.
This helped them to be always successful in their agricultural operations.

But today, this country with such rich knowledge is suffering on the agricultural front
for having forgotten these secrets of Nature!.
Posted by Dr Jayasree Saranathan at 6:41 PM

Interesting to read, Thanks for providing.
Would like to know similarly more on Star Moolam.
Thanks in advance.

Mam, myself srilakshmi, mine is jyestha nakasthra, in marriage matter, it getting delay , any remedy ,kindly reply mam