The research paper by Dr Narahari Achar on reckoning time on the basis of ancient vedic sources is given below.

The Kalpa, Yuga, Manvanthra etc are discussed in this ipaper. Of interest to me are the information on the 28th star of the Zodiac, the Abhijit and the Saptha rishi cycle.

Abijith is included in some Jyothishic chakras – mostly in Vaastu sastra, (the upa veda of Atharvan veda) and I will write on them later. Somehow I am not convinced of the explanations given so far by scholars on its exclusion. I strongly think that unraveling the secret of its omission will solve many issues that include a probability of earth’s change in speed and orbit sometime in the past.

The other information found in this ipaper is on the Saptha rishi charka.

The reference to this cycle is found in the literature from .

No one exactly knows the duration of this cycle though by one account it is said to be of 3600 years.

By another reckoning its time period is 2700 years.

Since the name is Saptha rishi chakra, there is a confusion on how to segment these years into 7.

If we take 3600 years, then that may be about 10 years in each degree of the zodiac.

10 years comprise of two yugas of Vedic period – one yuga comprises of 5 years of the Luni-solar calendar wherein the extra month of the moon is adjusted. Generally everything comes as a pair – an upward and a downward or a positive and a negative or day and night or man and woman and so on. The concluding verse of Pursuha sookhtham defines the duality of purusha (hreeschate…) by quoting them. Many Upanishads too speak about the various pairs.

If we go by that logic of pairs, 10 year duration make a pair of 2 pancha varshaathmaka yuga. The pair moving in 360 degrees may constitute a cycle.

But why this is called as Saptah rishi cycle is a question here.

Since the Saptha rishis refer to the 7 stars of Ursa Major and precession is taking place with reference to it, we need to have more inputs to substantiate this.

The other time period is 2700 years, This has been easily accepted period by many because this could mean 100 years each in the 27 stars of the zodiac. One popular source for this is a puranic mention of Saptharishis residing in each star for 100 years.

The hymn is on “Vishvadevas”, the Sun on its journey on the chariot driven by seven horses.

Every verse contains an implied reference to the sun’s movement around the zodiac.

But a mysterious reference to number 720 comes in the 11th verse of this hymn. It says,

“Formed with twelve spokes, by length of time, unweakened, rolls round the heaven this wheel of during Order.
Herein established, joined in pairs together, seven hundred Sons and twenty stand, O Agni.”

Dr Achar says that by a re-arrangement of the words in this verse, we can say that the number is 2700.

But this is difficult for me to accept.

It is because – as I found with other verses – this verse also seems to indicate a Jyothisha principle.

The movement of the sun around the zodiac happens at the rate of 1 degree a day and is completed in 360 days. This 360 degree zodiac is ‘twelve spoked’ (said in this verse) into twelve signs. This verse further says “ joined in pairs together”. That means each sign has pair. It is true that Jyothisha tells about a pair in each sign! The pair is known as ‘hora’ - the Surya hora and the Chandra hora.

If we look at the previous verses of this hymn it talks about the fathers and mothers and the about the cows. The surya and Chandra hora signify father and mother.

And Hora in Jyothisha reveals the wealth that one gets.

Now we have to see how there are 720 divisions around the zodiac.

This can be explained again from Jyothisha.

There is a method of making ‘nashta jathaka’ or ‘lost horoscopy’ for those who do not know their birth details to make their horoscope.

Originally told by rishis of unknown past, this has been re-written by Varahamihira in Brihat jataka. This is also found in other texts.

The ayana has 6 months and 3 seasons. Look at the next verse (12th verse in the Rig vedic hymn)

“They call him in the farther half of heaven the Sire five-footed, of twelve forms, wealthy in watery store.
These others say that he, God with far-seeing eyes, is mounted on the lower seven-wheeled, six-spoked car.”

This part is 5-footed and with 6 spokes. 6 spokes signify 6 months or 6 signs. The 5 foot tallies with Trimsamsa division of each sign into 5, lorded by 5 planets each (taara grahas). This finer division only determines the nature of a person! Thus in an ayana, 30 different combination can occur. Since each hora stands for one ayana,( as explained above for nashta jathaka) it signifies 30 divisions indicating the nature of the person born a particular division. Since 2 horas make a sign, we have 60 divisions in a sign. In this way for12 signs we there are 720 divisions (60 x 12)

It must be noted that the verse says “seven hundred Sons and twenty stand”.

The ‘son’ holds the further key to understand what this verse comes to say.

The son signifies the the birth of persons in 720 varying nature.

It says that the sun moves around the zodiac that is “on twelve forms”,

each of it paired (in horas with further sub-division of 30 each) forming 720 sons.

Let us read the verse once again the light of this explanation.

“ Formed with twelve spokes, by length of time, unweakened, rolls round the heaven this wheel of during Order.
Herein established, joined in pairs together, seven hundred Sons and twenty stand, O Agni”

In my opinion there is nothing in this context to suggest the Saptha rishi charka,

There are two more accounts also on which I find it difficult to agree with the narration on saptha rishi charka.

One is the subdivision of yuga cycles.

As per Surya siddhantha, the equinox point revolves 600 right angles or 150 cycles of revolutions in backward movement. This is equal to one Chathur yuga.

Therefore 15 cycles make the basic unit of a Chathur yuga.

If there is a constant rate of precession at the rate of 80 years per degree, then this is the duration taken by the equinox to complete one revolution around the zodiac. At present the rate is 72 years per degree. At this current rate it works out to roughly 26,000 years

But this rate had not been the same in the past.

If we take into account the differences during different times, perhaps we will arrive at this number 28,800. In the absence of such data, we can safely rely on yuga-years to arrive at the duration at the basic level.

In my opinion, this duration of the sun moving backward around the zodiac constitutes the saptha rishi cycle. The pole star along with the seven stars (saptha rishi) completes one full cycle in this.

The second source I have is from sangam text, the 11th verse from Paripaadal.

This verse gives the astro details of the day when it was written. The horoscope can be constructed using those details. One extra information that it gives is about the location of Agasthya!

The verse says that Agasthya was in Gemini!

How was that calculated?

Today Canopus is identified as Agasthya.

This is seen in the Southern sky off Taurus and after Sirius.

Why this star is singled out and used in astrology?

If we get answers for these two questions, perhaps we can resolve the mystery around Saptah rishi charka.

The verse and the horoscope made on the astro-details are given below.

The planetary position made from the details of the above verse. 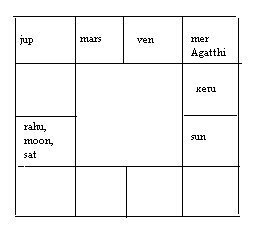 The full text of the Vedic hymn on Vishvadevas.

It's quick and easy.

A Wealth of Information at Your Fingertips

Now bringing you back...

Now bringing you back...

Please enter your email address below to reset your password. We will send you an email with instructions on how to continue.

I remain somewhat puzzled by the nature of the saptarishi cycle. We are appparently missing piece of the puzzle here . I need to do more digging to get an answer that is satisfactory

The term Saptharishi cycle by its name and logic seems to convey the apparent revolution of the Saptharishi mandala (Ursa Major) which is observed by the precession of the sun around the zodiac.

The starting point for reckoning is 0 degress Libra which coincides with the evolution of the present race of humans at the end of Ice age. The movement is anti clock wise. Ramavatara can be located in this cycle when the spring equinox was at (near) 0 degrees Cancer and Krishnavatar at 0 degrees Taurus.(proved by astronomical tables)

At 0 degree Aries, half the saptharishi cycle was ended and with that the high of Vedic civilization too ended.

From 0 degrees Aries to 0 degrees Libra, the cycle is in its descending movement coming along with deterioration of Dharma in this part. Presently we are at 6 degrees Pisces and by time the equinox shifts to 0 degrees Capricorn, there will be complete anarchy.

Between 0 degrees Capricorn and 0 degrees Libra, a cooling period when regeneration of human culture and dharma will take place.

Again a new cycle of chathur yuga nature starts at 0 degrees Libra - the sign of Dharma and Balance.

We can produce some pointers from Vedic past to substantiate this kind of rationale. This cycle is useful in identifying Yuga dharma and mankind's evolution in terms of civilized behavior. The tasks of Saptharishis also is that helping mankind evolve in civilized behavior.

In this context, the puranic version of 100 years for each star does not fit in. But that also be accommodated to get a better picture. In my opinion, the 100 years convey something else than what is peripherally understood. Every daivik entity of the universe has a life term of 100 units!. Creator Brahma has 100 years of life. The Vedic injunction for life of man is 100 years ('Vedam praayam nooru'). The 100 year denomination is equal for all entities but the duration of each year is not equal for every type of entity! In this reckoning, Brahma has completed only 50 years! He is left with 50 more years of life. The 100 year duration for man is measured in a different yardstick. Similarly, the 100 years of a star of the zodiac must be of a different calculation. If we can identify it, this mystery of salptahrishi cycle can be convincingly explained.

In a broader sense, we can only identify the entire duration of the '100' years as being equivalent to 28,800 human years (solar years) which is the basic unit of Chathur yugas. The scientifically calculated duration at the present rate of precession is 25,000 to 26,000 years. But the precession had not been constant at all times. We do have records of the precession in the past from astrological works. What is deduced is that the entire period is 28,800 years if we take into account the actual rate of precession as it was happening.