Praise of ‘Ram’ in Kalaingar TV!

A big Jai Ho to Ramayana in Kalaingar TV yesterday!!


Yes, I could not believe it happening
when I heard the panelists of Maanada Mayilaada programme
showering praises not just on the dance piece on Ramayana, but on Ramayana itself –
on how the story of Rama is needed to be taken to the masses!


Actress Ramba, one of the panelists, 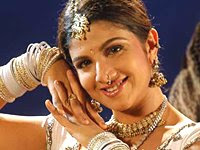 waxed eloquent on the message of Ramayana and
how we have to understand the events of Ramayana in the right perspective.
It was heartening to hear her talk so well on the evergreen Hero of the Hindus for all ages
by taking inputs from Tulsidas Ramayana.


As she said it is true even till this day the desire of any Indian woman is get a husband in the likes of Rama.


Kushboo also spoke on how the younger generation must be told of Ramayana
It was a big surprise to hear the 3 panelists shower full marks for that piece.


What was palpable is that Rama and Ramayana or for that matter,
Hinduism and Bhakthi are very much part of the minds of people.
It is only a miniscule population that harps on agnostism
spewing venom on Hindu Thought.
By and large most people of Tamil nadu are religious and revere Hindu ideals.


But it was a surprising to see this fearlessly done on Kalaingar TV.


It used to be said that this episode was named by Mr Karunanidhi only
and he takes keen interest on the contents delivered in this TV.


Is this an indication that he is in the verge of changing spots?
Any saffron smell luring him to re-do his electoral arithmetic?
Posted by jayasree at 10:42 AM

I agree Rambha commenting, but not Kushbhoo. She has already involved herself in several anti-Hindu deeds!