Song of Mother Earth on vanity of rulers!

The current scenario of all round deterioration in moral values and thirst for power reminds me of the ‘Song of Mother Earth’ found in Vishnu Purana.

The Earth is in-conquerable. Yet people think that they can conquer her and claim the land to be theirs.

Many kings with perishable frames have come and claimed that the non-perishable earth is theirs! Blinded with deceptive notions of individual occupation, they have indulged the feeling that suggests, "This earth is mine--it is my son's--it belongs to my dynasty.”

But they all have gone. Gone are even the traces of their names and identity.

This blinded perception continues even in the democratic times of today making this appear a ‘Monarchic democracy”. The dynastic control over the political parties has become the norm of times. Every self proclaimed leader is seen fighting to get a share in ruling this land for himself, his sons and his relatives - not out of love for giving people a golden age, but for making times golden for themselves.

Mother Earth has seen thousands of this kind of breed in the past. Earth has seen even a better crop of leaders in the past who wished to possess her. The present day leaders come near them only as a contrast to those olden kings as if to show how a ruler should not be.

The pre-election scenario looks like a thriller of who is going to go with whom, who is going to ditch whom and who is cleverer in reaping better returns after the elections.

Mother earth laughs at all these selfish mortals.

Such a scene was explained by sage Parashara to Maityeya in Vishnu purana.

The Chant of the Earth was earlier communicated to King Janaka by Sage Asita and was repeated by sage Parashara in Vishnu purana. 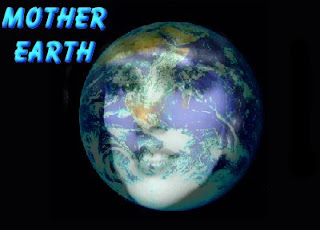 "How great is the folly of princes, who are endowed with the faculty of reason, to cherish the confidence of ambition, when they themselves are but foam upon the wave.

Before they have subdued themselves, they seek to reduce their ministers, their servants, their subjects, under their authority; they then endeavor to overcome their foes.

'Thus,' say they, 'will we conquer the ocean-circled earth;' and, intent upon their project, behold not death, which is not far off. But what mighty matter is the subjugation of the sea-girt earth to one who can subdue himself.

Emancipation from existence is the fruit of self-control. It is through infatuation that kings desire to possess me, whom their predecessors have been forced to leave, whom their fathers have not retained.

Beguiled by the selfish love of sway, fathers contend with sons, and brothers with brothers, for my possession.

Foolishness has been the character of every king who has boasted, 'All this earth is mine--every thing is mine--it will be in my house for ever;' for he is dead. How is it possible that such vain desires should survive in the hearts of his descendants, who have seen their progenitor, absorbed by the thirst of dominion, compelled to relinquish me, whom he called his own, and tread the path of dissolution?

When I hear a king sending word to another by his ambassador, 'This earth is mine; immediately resign your pretensions to it;' I am moved to violent laughter at first, but it soon subsides in pity for the infatuated fool."

“These were the verses, Maitreya, which Earth recited, and by listening to which ambition fades away like snow before the sun.

I have now related to you the whole account of the descendants of the Manu; amongst whom have flourished kings endowed with a portion of Vishńu, engaged in the preservation of the earth.

Whoever shall listen reverently and with faith to this narrative, proceeding from the posterity of Manu, shall be purified entirely from all his sins, and, with the perfect possession of his faculties, shall live in unequalled affluence, plenty, and prosperity.

He who has heard of the races of the sun and moon, of Ikshwá.ku, Jahnu, Mańd́hátri, Sagara, and Raghu, who have all perished; of Yayáti, Nahusha, and their posterity, who are no more; of kings of great might, resistless valour, and unbounded wealth, who have been overcome by still more powerful time, and are now only a tale; he will learn wisdom, and forbear to call either children, or wife, or house, or lands, or wealth, his own.

The arduous penances that have been performed by heroic men obstructing fate for countless years, religious rites and sacrifices of great efficacy and virtue, have been made by time the subject only of narration.

The valiant Prithu traversed the universe, every where triumphant over his foes; yet he was blown away, like the light down of the Simal tree, before the blast of time.

He who was Kártavíryya subdued innumerable enemies, and conquered the seven zones of the earth; but now he is only the topic of a theme, a subject for affirmation and contradiction.

Fie upon the empire of the sons of Raghu, who triumphed over Daśánana, and extended their sway to the ends of the earth; for was it not consumed in an instant by the frown of the destroyer?

Mańd́hátri, the emperor of the universe, is embodied only in a legend; and what pious man who hears it will ever be so unwise as to cherish the desire of possession in his soul?

Have they ever really existed?

Where are they now?

The powerful kings who now are, or who will be, as I have related them to you, or any others who are unspecified, are all subject to the same fate, and the present and the future will perish and be forgotten, like their predecessors.

Aware of this truth, a wise man will never be influenced by the principle of individual appropriation; and regarding them as only transient and temporal possessions, he will not consider children and posterity, lands and property, or whatever else is personal, to be his own.”