I came across an interesting image of Hamsa or swan connected to Gandhara art. 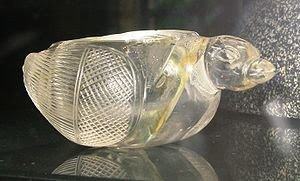 A Hamsa sacred goosereliquary, stupa 32 of the Gangu group, Babar Khana, Taxila, Gandhara, 1st century CE. This Hamsa was found inside a granite bowl, with an inscribed gold sheet stating "Shira deposited the relics of her departed parents in the Hamsa". It has a cavity in the middle for the insertion of the relics. British Museum.

The Hamsa bowl with the relics sounds a Buddhist connection.
But in Vedic way of life, storing relics was not in practice. What was in practice was to store the burnt remains of the deceased in a burial pot.


We come across a description of such storage, in the immortalized verses of Thevaram by sage Thirugyana sambhandar. He brought life to a dead girl called ‘Poompavai’ from the burnt remains that were stored in a pot. The songs that brought life to the girl were in praise of Sri Virupaksheeswarar in Mylapore.


Hamsa, seems to go with transcendence.
It is also about gaining supreme Knowledge or Buddhi.

Brahmi has Hamsa as her Vahana.

Brahma took up the form of hamsa when he searched along with Vishnu, the upper and lower extremes of lord Shiva.

It is even said that Shiva once traveled on hamsa (found near His abode in Manasarover) to Madhya dveepa. Here the hamsa-allegory is to speed and quick transition from one plane to another. The details of this can be read in the stories of ISKCON.


Such transition happens with dhyana and gyana,

Since Brahma stands for gyana, acquisition of knowledge and Vedas, the swan became his carrier.


The Hamsa vahana in temple processions is symbolic of Brahma or Vedas carrying the Lord.


In astrology too, hamsa is used in the meaning of knowledge, that too, vedic knowledge. There is an important yoga called “Hamsa yoga” which is one among the 5 pancha maha purusha yogas. This yoga is caused by Jupiter, the signifactor for Teacher, when it is in exaltation or own house in Kendra from lagna or moon. The one born with this yoga will be an adept in Vedic wisdom and knowledge of the Supreme. A person born in this yoga is said to have venerated his teacher in his previous birth, according to the text “Brahma rishi vaakhyam”.


There is a reference to Hamsa in Kalidasa’s Raghu vamasa, as a poetical image of the flight of spiritual swans to the lake (Manasarover) in the Himalayas.


Like this, from different perspectives we can connect hamsa to knowledge and transcendence only.

The vedic hamsa must have entered into Buddhist thought as Buddha was known for attainment of Supreme knowledge. (Due to this reason it is possible to come across images of not only Buddha but other saints / sages / persons in meditative mode, in connection with Hamsa.)

It is an interesting coincidence that Hamsa upanishad was first preached to a sage named “Gautama’.


Keeping relics is a holy custom of Buddhists.


Sage- composer, Sri Sadashiva Brahmendrar is said to be a practitioner of Hamsa yoga.
His song, “Sarvam Brahma mayam” concludes like this:-

Hamsopanishad (Hamsa Upanishad) describes the Hamsa Vidya.
The word is aham + saa = hamsaa
It means knowing - ‘I am that/he’.


The one who practices Hamsavidya will know that one is the manifestation of the Supreme.
Hamsa also means swan. Like a swan that knows to separate water and milk from a mixture, the practitioner of Hamsa vidya knows to separate and take only good from the world where bad and good are present. The one who knows this vidya is known as Hamsa Rishi.


Verse 8 of this Upanishad talks about the 8 faced (directions) Buddhi.
The 8 directions have the same universal relevance in Vaastu mandala too. That will be separately discussed in a future post.


1. Gautama addressed Sanatkumara thus: “O Lord, thou art the knower of all Dharmas and art well versed in all Shastras, pray tell me the means by which I may obtain a knowledge of Brahma-Vidya.

2.
Sanatkumara replied thus: “Hear, O Gautama, that Tattva as expounded by Parvati after inquiring into all Dharmas and ascertaining Shiva’s opinion.

3.
This treatise on the nature of Hamsa which gives the fruit of bliss and salvation and which is like a treasure to the Yogin, is (a) very mystic (science) and should not be revealed (to the public).

4.
Now we shall explain the true nature of Hamsa and Paramahamsa for the benefit of a Brahmacharin (a seeker after Brahman or celibate), who has his desires under control, is devoted to his guru and always contemplates (as) Hamsa and realise thus:


5. It (Hamsa) is permeating all bodies like fire (or heat) in all kinds of wood or oil in all kinds of gingelly seeds. Having known (It) thus, one does not meet with death.


6.
Having contracted the anus (with the heels pressed against it),
having raised the Vayu (breath) from (Mula) Adhara (Chakra),
having made circuit thrice round Svadhisthana,
having gone to Manipuraka,
having crossed Anahata,
having controlled Prana in Visuddhi and then
having reached Ajna,
one contemplates in Brahmarandhra (in the head)
and having meditated there always ‘I am of three Matras’,
cognises (his Self) and becomes formless.
The Sisna (penis) has two sides (left and right from head to foot).


7.
This is that Paramahamsa (Supreme Hamsa or Higher Self)
having the resplendence of Crores of suns
and by whom all this world is pervaded.


9.
When Hamsa is absorbed in Nada (spiritual sound),
the state beyond the fourth is reached. Nada
(which is at the end of sound and beyond speech and mind)
is like a pure crystal extending from (Mula) Adhara to Brahmarandhra.
It is that which is spoken of as Brahma and Paramatman.


10.
(Here is the performance of Ajapa Gayatri is given):
Now Hamsa is the Rishi;
the metre is Avyakta Gayatri;
Paramahamsa is the Devata (or presiding deity)
‘Ham’ is the Bija;
‘Sa’ is the Sakti;
So’ham is the Kilaka (wedge).


Ajapa mantra. (May) the bodiless and subtle one guide
(or illuminate my understanding).
Vaushat to Agni-Soma.
Then Anganyasas and Karanyasas occur
(or should be performed after the Mantras as they are performed
before the Mantras) in the heart and other (seats).


13.
Having done so, one should contemplate upon Hamsa
as the Atman in his heart.


14.
Agni and Soma are its wings (right and left sides);
Omkara is its head;
Ukara and Bindu are the three eyes and face respectively;
Rudra and Rudrani (or Rudra’s wife) are the feet Kanthata


15.
(or the realisation of the oneness of Jivatma or Hamsa,
the lower self with Paramatman or Paramahamsa, the Higher Self)
is done in two ways (Samprajnata and Asamprajnata).
After that, Unmani is the end of the Ajapa (Mantra).

Having thus reflected upon Manas by means of This (Hamsa),
one hears Nada after the uttering of this Japa (Mantra) a crore of times.
It (Nada) is (begun to be heard as) of ten kinds.
The first is Chini (like the sound of that word);
the second is Chini-Chini;
the third is the sound of bell;
the fourth is that of conch;
the fifth is that of Tantiri (lute);
the sixth is that sound of Tala (cymbals);
the seventh is that of flute;
the eighth is that of Bheri (drum);
the ninth is that of Mridanga (double drum);
and the tenth is that of clouds (viz., thunder).


17.
He may experience the tenth without the first nine sounds
(through the initiation of a Guru).


18.
In the first stage, his body becomes Chini-Chini;
in the second, there is the (Bhanjana) breaking (or affecting) in the body;
in the third, there is the (Bhedana) piercing;
in the fourth, the head shakes;


19.
in the fifth, the palate produces saliva;
in the sixth, nectar is attained;
in the seventh, the knowledge of the hidden (things in the world) arises; in the eighth, Para-Vak is heard;


20.
in the ninth, the body becomes invisible and the pure divine eye is developed;
in the tenth, he attains Para-Brahman in the presence of (or with) Atman
which is Brahman.


21.
After that, when Manas destroyed,
when it which is the source of Sankalpa and Vikalpa disappears,
owing to the destruction of these two,
and when virtues and sins are burnt away,
then he shines as Sadashiva of the nature of Sakti pervading everywhere,
being effulgence in its very essence, the immaculate,
the eternal, the stainless and the most quiescent Om.
Thus is the teaching of the Vedas; and thus is the Upanishad.”


Here ends the Hamsa Upanishad belonging to the Sukla-Yajur-Veda.