Women evolve prettier, not men – then what about Rama & Krishna?

The following news report on the findings of University of Helsinki that woman are becoming more beautiful from the time of their cavemen- life, while men are not(!?) sounds funny to me.

Women will always be women – beauty is a part of their constitution.

Thinking of it astrologically, even signs (the signs are categorized as odd and even alternating from Aries onwards) and signs ruled by Venus and Moon (Taurus, Libra and Cancer) and the lords of these signs getting associated with the birth lagna confer femininity. If both the lagna and moon sign happen to fall in these signs, the feminine looks will be complete. It is only but natural to expect most women born with these connections.

But if a man has both his lagna and the moon sign in these signs and feminine planets getting associated with these two, he will also look feminine and beautiful! It is better man remains not beautiful. Men are from Mars in astrology too. Jupiter, Mars and Sun signs are better for a man to be born in.

Thinking of this, I can not resist a talk on Rama’s looks!!

Moon in Punarpoosam 4th padam shows that his lagna and moon were Vargotthama, strengthening the feminity conferred by the even sign.

But he had Jupiter, in exaltation in Cancer and getting Vargotthama!

Jupiter makes one tall, respectable looking and of good proportions.

Rama’s Samudrika lakshana is completely masculine which will be written in another post. (The masculine samudrika lakshana of Rama is described by Hanuman in Sundhara khandam). But the even sign connection to lagna and moon sign, with Jupiter and moon posited in it would have made him look – what we call a metro-sexual male!

Birth in Cancer must have given Rama a bulge in the belly! Rama must have been on regular fitness work-out. His samdrika lakshana shows that he didn’t have any extra flesh.

Jupiter in lagna and moon in the asterism of Jupiter (Punarpoosam) must have made him look like a tall and respectable Vedik with sharp features. 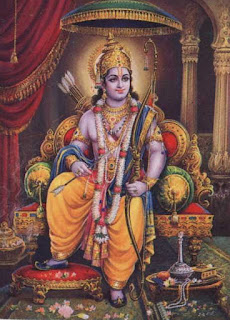 A gigantic and tall figure with all masculine features but with soft looks makes Rama admirable by men and adorable by women who look for the soft nature somewhere expressed in the looks of a man. This combination made him very humble and soft at places where he has to show such traits and adamant and angry wherever such manly prowess is needed to be exhibited.

In many places in Valmiki Ramayana, Rama’s face is described as a moon – cool and pleasant. His very name Rama means one who gives happiness. His name and looks are very pleasant. Nowhere in Valmiki Ramayana, do we come across his name as Ramachandra. But this name is popular as a name of Rama. (This name found in Padma purana). This is because Rama was pleasant to look at and to think about. This nature is a feminine attribute which came to be incorporated (astrologically) by association with even signs and Moon.

Coming to think of , he too was born in all feminine sign – in Taurus, an even sign. The lagna and Moon sign were in the same sign and moon was in its own asterism (Rohini) making him to be called as ‘beautiful’. His interests in dance and arts forms are in tune with interests in beauty-related ones that those born in these signs usually get. You rarely recall a Martian anger or warring urge in .

The basic reason for the feminine sign connection to Rama and is the sattwic feelings that their figure and traits must develop in the minds of the devotee.

Compassion, love, mercy, caring etc are all feminine traits. Only these traits tame the rough and tough and bring them to sattwic path. World’s renowned figures of these qualities look a little feminine. World’s preachers of religious thought look soft with a feminine tinge. Be it a Buddha or a Jesus or a Vivekananda or Ramana maharishi, one can find such a nature in their looks.

If men are not evolving in beauty – something the research has found out – then it must be a cause of concern. It means that men continue to be rude and crude – they are not only Martian but Saturnine as well.

Dump those jars of creams and gels. As a woman you don't need them anymore. Evolution keeps you beautiful anyway -- so why worry?

A group of scientists at the discovered that the woman of today is far more beautiful than her Stone Age counter- part. Over the years women have indeed become more beautiful. But alas -- the men have stayed unchanged and do tend to resemble their cavemen ancestors even today.

Women in Chennai are nevertheless thrilled with these findings. "Men have always been rough and tough in nature while women have been sweet and demure. There is a strong possibility that these qualities have evolved over the ages," says Sunita Jayakumar, a social scientist and consultant psychologist. Natasha Raj, a model, who believes that the word `beautiful' is something that is associated with women couldn't agree more. "You would- n't call a man beautiful, would you?" she asks "Beauty is something that is exclusively for women, no matter how hard we try to break that stereotype.

A woman gets noticed for her looks and a man for his strength," she explains.

The scientists who carried out this study also revealed that the chances of good-looking women having good-looking kids were higher than those who were plainer looking.
Beautiful women also tend to have daughters born to them the study said, which is also a part of the evolution cycle.

Photographer Dreeamcast Karthik echoes a similar viewpoint and explains that the fact women are able to multi-task also works in their favour, "Yes, I completely agree with the finding that women are getting prettier and this is not just restricted to the upper class of the society. I've noticed that women across all strata of society invest a lot in terms of time and effort to look beautiful."