Rajagopuram of SriKalahasthi temple collapsed - what it tells astrologically? 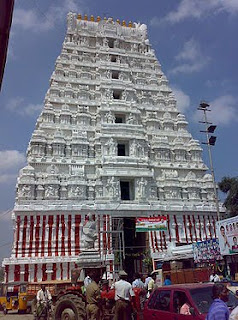 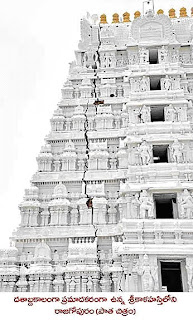 The collapse of the Rajagopuram of the famous Kalahasthi temple has created worries in the minds of devotees. This post is aimed at setting at rest unnecessary worries.


Astrologically we can look at this from 2 angles - from the point of view of nimittha sastra (omens) and vaastu sastra. 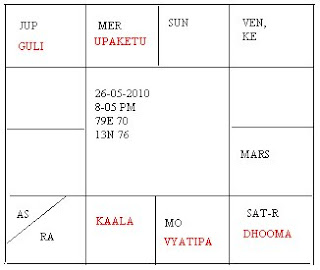 According to Varahamihira we have to see the rising sign, the star of the day and the direction.
The rising sign is Sagittarius in Moola lorded by Nirirthi. It is a fiery sign and occupied by Rahu. Note that lagna falls within the 3rd aspect of Saturn from U-Phalguni. The lagna lord is the 4th in own house (watery sign). The moon is transiting in Vishaka (Jup) in a movable and windy sign. The moon is nearing fullness.


In omen sastra, the lagna and moon positions are important. The upagrahas also are to be seen. Gulika, Dhooma, Vyatipata and Upaketu are not well posited. The cumulative result is fear from fire and wind. The direction is North West and East of the place where the temple is situated.


Upaketu (upagraha of Ketu) in Aswini also foretells fear from fire. It is in the 5th house joining the 10th lord and aspecting the 11th. Gulika in the star of Andhra (Revathy) adds to this and shows that the capital city of Andhra will undergo turmoil in the coming months. Some fire accident is not ruled out.


Jupiter in watery sign and moon in Jupiter’s asterism in a windy and movable sign shows fear from cyclones and waters. It is significant to note that the collapse has happened in Vaayu sthalam important for Rahu. The direction of the lagna has Rahu as a sub-deity. Some defect or disrespect with reference to Rahu is noted by this. Rahu stands for land and digging. It is probable that some unauthorized digging is / has happened in and around the temple or some landed property of the temple had been defaced or looted. 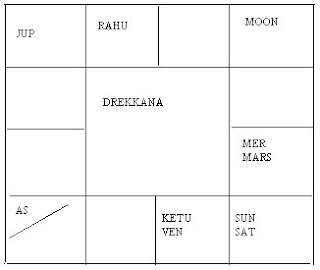 The lagna however is in benefic Drekkana. So the impact will not be that bad. Jovian connection shows some low for spiritual people or vaideeha community. Some spiritual leader or sect or some Hinduism oriented interests will face troubles. But the impact will be at a minimum level as Jupiter is in own house and aspects 8th, 10th and 12th places from lagna (Dhanur)

From another angle the collapse time indicates trouble in political stability which is also indicated in the chart of Andhra pradesh. Moon in the 11th (Assembly / parliament) and Saturn in retrogression in a friendly sign in 10th in the asterism of Sun shows that political troubles are in store. Andhra Pradesh is anyway heading for a period of turmoil which will peak in 2013. The Gopuram collapse is one of the omens showing that eventuality. 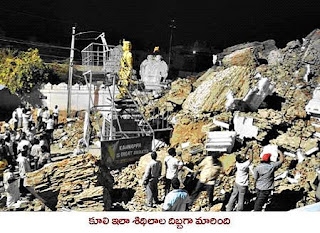 From the point of view of vaastu, any structure - be it a house or a temple come under the purview of vaastu principles and the kind of planetary combinations at the time of starting the construction. The life of the Gopuram is defined by such combinations. For a structure to last for more than 1000 years Venus or Jupiter must be exalted in the lagna or Saturn must be exalted in the 11th house. No planet must be in enmity. When this gopuram was built some 500 years ago not all the planets would have been there in auspicious places. Particularly some airy sign (Ge orLi or Aq) and Saturn would have been afflicted to create this kind of collapse with the above astrological factors.


There need not be any fear of 'wrath' of the deity. The rising drekkana at the time of collapse was a benefic with Jupiter as the lord. Jupiter has positional strength and not weak in shadbala. Sun and the Moon are high in naisargika bala. So the temple is safe and the main deities are powerful. In Drekkana Jupiter is opposed by sun and Saturn from the 10th. Worship and appeasement of Rudran (pratyadhi devatha of sun) will do. Let people do Soorya upasana (Surya is ati devatha for Jupiter) and recite slokas for Adhithya to ward off fear and suffering to themselves.

PVC pipes stored in the open in suburban Thirumullaivoyal caught fire on Sunday morning engulfing the area in thick smoke.It took fire fighters over three hours to put out the fire; no one was injured in the fire.http://www.hindu.com/2010/05/31/stories/2010053159160100.htm

At least 30 people, including 10 children, were burnt to death early Sunday when the state-run bus they were travelling in fell off a bridge into a ditch and caught fire in Karnataka's Chitradurga district

Your well researched thoughts on astrology, especially in relation to disasters and natural calamities, has created in many a regular reader of your blog, a deep curiosity about astrology. Like Sanathana Dharma, astrology also seems to be a grossly misunderstood subject. I am sure i am representing a lot of like minded people , when I humbly request you to start a series on the fundamentals of astrology.

Thanks Ms Vidhya for your comments.

Yes, astrology is a misunderstood subject today due to ignorance and misuse of it by practitioners. Sanathana dharma and astrology go hand in hand. Many a misunderstood concept can be resolved only with the aid of astrology.


It is not an exaggeration if I say that Astrology is like the software of God or Creator by which the universe is created, run and destroyed. It is said that Astrology is the eye of the Veda Purusha. You know the mind of the Creator only if you know astrology. Its application is such that. But one must use it for such vast humanitarian purpose.

My 2-part article published in The Astrological Magazine some time ago on how and why sages have said that it is the eye of the Veda purusha is now uploaded in my scribd page. Please click the link in the side bar to access it.

Astrology is very vast and I have no patience and time to explain the fundamentals. But I want to write the astrology told in sangam texts. Sometime I will write it as a separate blog.

Meantime I will be writing on mundane issues. Not many have analysed the application of astrology for mundane purposes. I wish to do that and am doing it for, that serves a common cause for humanity.