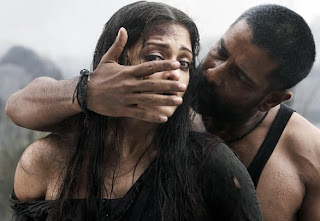 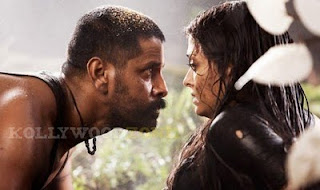 Let's try to sort some things out about Abhishek Bachchan, Aishwarya Rai and especially the heralded 'genius' Mani Ratnam who has been offering ambiguous answers to the public about his Ramayan reference of Raavan. If according to Mani Ratnam, even Ram is not above questioning, then here's a basic question: how come Mani Ratnam and this crew are above questioning?

You don't name a movie Raavan by accident Mr. Ratnam. Raavan is not a common name, nor one you created having thought of it one fine day randomly. And there is no such thing as 'Raavanan'. The name is Raavan and it is from the epic of The Ramayan codified thousands of years ago by the robber turned scholar Valmiki on the events of Ram, born in Suryavansh and the Prince of Ayodhya.

The question the Indian public needs to ask is why invert the Ramayan? These people (Mani Ratnam, Aishwarya Rai, Abhishek Bachchan) either believe Ram was God or they don't. If they believe he was, then they have been committing blasphemy questioning Ram and justifying Raavan. If they don't, then they are committing copyright violation...on Mr. Valmiki's work. Which is it?

Because Valmiki clearly codified that Ram is the embodiment of the 'Maryada Purushottam' (the alpha male: the best of man) of civilization. Ramayan is the text of ideal behavior of man within the context of civilization. It represents what the Indian civilzation was and can be at its best, from the profound simplicity of Gurukul to invasion across the Ocean breaching it, to the characteristic of sacrifice that is intrinsically Indian. Dashrath didn't force Ram to go into exile. He chose to. Nobody forced Sita to goto exile once it was Ram's exile. Sita chose to. The Ramayan is about choices and consequences and how Indian men and women at their best respond to them. It is to text what the edicts of Ashok Maurya are to the notion of Indian empire, an epic among epics describing a time of India at its zenith. Not some trivial piece of work that can be compressed in a 2 hour movie featuring wannabes.

And what Mani Ratnam's work tries to do is not just interpret the Ramayan but cast an inversion onto it, which is the central problem with the movie apart from the casting of Aishwarya Rai, not just any editing issues that Amitabh Bachchan keeps harboring on. Not that there weren't any editing issues or that Abhishek Bachchan's Hindi delivery isn't pathetic. It is. But that's not the central problem. We literally have an 'ulta ramayan' being advanced here. So Ratnam gets 'Ram' to be a liar, 'Lakshman' and crew to be 'rapists'. Aishwarya Rai pretending to be 'Sita' pretending to be going all googly-eyed for 'Raavan'. Uh huh. In some ways it's true that whatever Mani Ratnam's Raavan is, it sure as hell doesn't have anything to do with the real Ramayan. It may have to do with a number of things going on in Ratnam's head but we won't get into that right now.

But let's go back and stipulate the worst case scenario for the purpose of making the point against his hackjob attempt here in this 2 year epic disaster. Let's say that there is no God and Ram was not God. Then from the book on the acts of God, Ramayan turns much into a human epic like Odyssey or The Iliad are from the ancient Greece. Fine, but it is still an epic, an original epic by a genius.

But that genius was not Mani Ratnam nor Kambh in 12th century AD(whose Ramavataram is actually nowhere near as subvertive an attempt), but Valmiki centuries before 0BC, who actually and originally brought forth The Ramayan which has stayed for thousands of years. That's genius. Genius does original work which has staying power beyond a few weeks. Genius doesn't steal from others' works, inverts them and then tries to take credit for it; as these people seem eager to. Surprisingly nobody has questioned them on this. But then again, knowing the orientation of Indian media, it is not surprising.

You don't interpret Da Vinci's Mona Lisa, by giving it a mustache, and then go around thinking, or your supporters claiming you're a genius for it. If Mani Ratnam is a genius, as his supporters in media and industry want Indian public to believe, let him create an original work of his own that can stay for thousands of years like Mr. Valmiki's has. Good luck. But his odds of pulling that off are not looking very high.

Because to reinterpret The Ramayan Mani Ratnam, you have to understand it first.