India was the home of oldest insects.


has always been the cradle of mankind. It is now proved that it has been so even for the insects! Insects that lived 100 million years ago are now being discovered in ! Some time ago I read another report saying that even the fossils of the oldest plants ever found anywhere on the earth have been found in the Vindhya mountains. being the centre of evolution of any form of life is thus being made out from the discoveries.

All these are proving our puranic description of land form and life and that mankind had  evolved in this land. Jambhu dweepa had been the centre of activity and there were layers of other land forms surrounding it. Indian landmass situated in the Jambhu dweepa moved towards north and collided with the Asian landmass giving rise to the formation of 10 million years ago. The Puranic lore of Shiva Parvathy wedding attracting huge number of invitees that resulted in the ducking of the landmass under the Himalayas can be related to the initial impact on the landmass that kept pushing the Himalayas up. The Southern part of the landmass lifted up as a result according to puranas.

The exact description was that Vindhyas were rising as if to dwarf the Meru. Sage Agasthya was sent by Lord Shiva to restore balance. He caused the Vindhyas to stop growing and went to the South and made it even with the northern landmass. This is the story. But the derivations from this story are now being discovered as part of scientific research.

This story and the current discoveries show that was not of the shape and size that it is now. It also shows that was part of a larger landmass that moved northwards. From Sangam Tamil we know that had extended for 1000s of square miles south of Kanyakumari of today. The entire land mass had separated from and moved towards north. This started 100 million years ago. 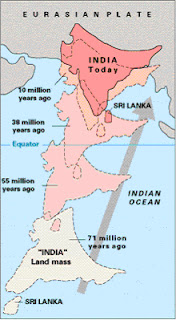 The picture that we see in the internet is not accurate because it does not show the larger landmass that moved and collided in such a way that the mighty had risen up.

The impact zone of this collision had been felt from upto . Throughout this region the had risen up. So the landmass at that time must have had the floor of the in considerable mass to enable such a push up. (Read my old articles on this and how came into being)

The issue of interest for this post is that insects that are now seen in many parts of the world had been found in the Indian mass at a time when it had not collided with . This discovery proposes the theory that the Indian land mass must been in the south and closer to and , through which those life forms might have shifted to other parts of the world in that era.

The fossilized forms of life had traveled along with the land mass and are now seen at places away from the original climates where they could have thrived.

While these findings indicate a lively Indian mass about 100 million years go, the genetic studies reveal human life thriving in that place about a million years ago. Though the original movement is from east , human population had indeed thrived over many 1000s of years in the Indian landmass only according to those studies. It was from , further movement had happened. Such a development could have happened if only the Indian landmass had been huge and close to . This also supports the idea of an extended Indian landmass being closer to in those times.

The discovery of ancient fauna and flora in the present Indian land mass is only a remnant. The sub merged area between the 2 undersea mountain ranges would have supported a large number of lives of different forms. Deep sea explorations and exploration of the submerged mountain ranges in the are the need of the hour. 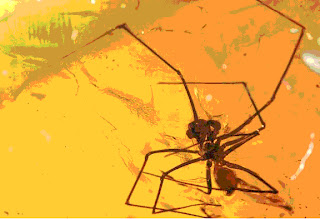 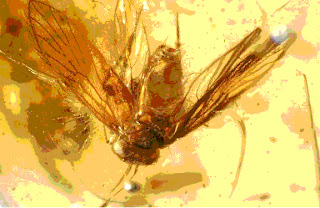 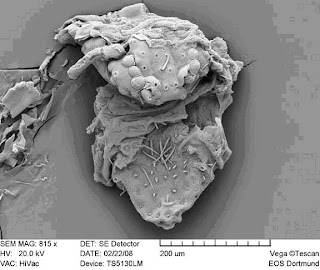 A coccid insect extracted from amber, magnified with a scanning electron microscope. Credit: .
A cache of ancient insects trapped in amber reveals that the Indian subcontinent wasn't as isolated 50 million years ago as previously believed, according to a new study.
The find, 330 pounds (150 kilograms) of fossilized tree resin excavated from northern India, contains more than 700 preserved insects and spiders, as well as plant spores, leaf portions and small flowers. Geological evidence shows that the landmass had been drifting independently for about 100 million years at the time, but the organisms in the amber are closely related to other species found in northern Europe, Australia, New Guinea and tropical America, the researchers report online this week in the journal Proceedings of the National Academy of Sciences.

That means the fauna of India didn't evolve in isolation, said study researcher David Grimaldi, the curator in the Division of Invertebrate Zoology at the of Natural History in .
"There must have been some connections between and that geologists aren't accounting for," Grimaldi told LiveScience.

The resin is found in 's province, where open-pit mining brings it to the surface. For the past three years, researchers have been visiting the mines for 10 days per year to collect the fossil-rich amber, study coauthor Jes Rust, professor of invertebrate paleontology at the Universität Bonn in , told LiveScience.

Rust, Grimaldi and their colleagues then return the amber to the lab, where they painstakingly seek out the tiny insects, spiders and other arthropods inside. The preservation of the arthropods is particularly good in this amber, Rust said, meaning the researchers can dissolve the resin and extract whole preserved insects for study.

"This is really unusual," Rust said. "It's like if you would have a complete dinosaur."
What is now the Indian subcontinent broke away from about 150 million years ago and didn't join up with another landmass — — until about 50 million years ago. So the research team expected to find a host of unique species that had evolved over those 100 million years. Instead, they learned that the insects and spiders in the amber are related to other species found fossilized everywhere from the to the Baltic.

That could mean that and collided a few million years earlier than geological evidence suggests, Grimaldi said. Or it could support the theory that there were small islands connecting the continents, allowing species to "hop" across.
"Even though might not have slammed into at that time, there might have been stepping stones," Grimaldi said.

Also hidden in the amber were clues to the ecosystem in 50 million years ago. The amber is the oldest evidence of a modern-type tropical rainforest in , Grimaldi said. Plant fragments both in the amber and fossilized nearby paint a picture of an ancient landscape that would have looked much like the forests of today. The resin itself comes from a family of trees called Dipterocarpaceae, which dominate modern tropical forests in southeast Asia.

"The evidence is beginning to accumulate that tropical forests are ancient," Grimaldi said. "They probably go back to right after the K-T boundary," between the Cretaceous and Tertiary periods 65 million years ago, when non-avian dinosaurs went extinct.
The team plans to return to in January to collect more samples, and the work in the lab is only beginning, the researchers said.
"We're still discovering all sorts of cool stuff in this amber," Grimaldi said. "Every day."