As the year of Scams is coming to a close, a sordid story of what actually ails our country is staring at us with the failure of the Indian space program on 25th of this month. The cause of the failure was something that is unimaginable in a science venture of this kind. To understand it in a common man’s language, the cause lies at the assembly level of the rocket. Due to sheer negligence and deplorable lack of a commitment to the job that is to be done, the assembly staff had not fitted the boosters properly. What resulted was a disaster that is fit to be called as a national shame.
Before launch 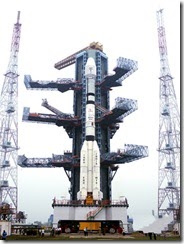 After launch.....
Can such a thing happen in the premier scientific venture of the country?
Do we have a committed and talented work force in these institutions is a question that comes to my mind.
What is the process of recruitment of these people?
Is the government compromising on quality by having reservation policy at recruitment in institutions like ISRO?
If so, should we have such a dilution of talent in scientific institutions of this kind? Should we not test the acumen and also the deep love or passion for the subject when recruitments are made?
Another question also is daunting us. Was anyone made accountable for the disaster? Look at the Russian scenario. On December 5th they launched a rocket which crashed soon after the launch. Similar to the Indian fiasco, the cause was traced to the ground level work. The staff had filled more fuel than necessary. This resulted in the booster rocket losing its way. A few days ago, the Russian President had fired the people responsible for the failure. Do we ever hear such a thing in ?
Talent, passion and commitment for the job and accountability are the 3 essentials for success in any job. fails on all these 3 counts at all places.
The country’s political policy is to degrade talent.
They want less talent instead of the best talent in the name of social equality!
Their policy does not allow the people to pursue what they are passionate about. I wonder how many people in Space technology Institutions are there due to their passion for space or rocket technology. Do they just land up at the Institution as a matter of getting a job?
And finally there is absolutely no sense of accountability right from the Prime Minister onwards.
These three ailments manifest in different fields in different ways.
Will this change someday?
--------------------------
From
http://www.space.com/news/russian-space-officials-fired-satellite-crash-101229.html
Russian Space Officials Punished for Botched Satellite Launch
Russian President Dmitry Medvedev has formally reprimanded the chief of his country's national space agency and fired two other high-ranking space officials over the loss of three state-of-the-art navigation satellites in a botched rocket launch earlier this month.
The decision, announced by the Kremlin today (Dec. 29), comes after an investigation into the Dec. 5 launch failure of a Russian-built Proton rocket carrying three new Glonass-M navigation satellites.
The satellites never reached orbit. Instead, they plunged back to Earth and crashed in the north of .
A follow-up investigation traced the failure to an embarrassing mistake: Technicians apparently  loaded the Proton rocket's Block DM-3 upper stage with between 1,000 and 2,000 kilograms more fuel than planned, which sent the booster off course.
According to the Kremlin statement, Medvedev fired Viktor Remishevsky, deputy chief of Russia's Federal Space Agency, and Vyacheslav Filin, vice president and deputy chief of the rocket manufacturer RSC Energia, after receiving the report on the launch failure investigation.
The two space officials were fired "for the errors made in the calculations for refueling the vehicle's Block DM-3 upper stage," according to the statement.
Medvedev also issued a formal reprimand to Anatoly Perminov, chief of 's Federal Space Agency (also known as Roscosmos).
"Roscosmos will take additional measures to reinforce disciplinary measures," the statement read.
Soon after the launch failure, Russian investigators traced the cause to the overfueling blunder and cleared the rest of the Proton rocket of any concern.
The Proton rocket fleet successfully returned to flight on Monday (Dec. 27) with the launch of a Ka-Sat broadband communications satellite for Eutelsat.
's Glonass-M satellites perform a navigation service to Russian civilian and military customers similar to global positioning system satellites. The satellites each weigh just over 3,000 pounds (1,415 kilograms) at liftoff and are designed to last seven years in orbit, according to the satellite fleet manufacturer Information Satellite Systems Reshetnev Co.
There are 26 Glonass satellites in orbit, with two reserved as spares. The satellite constellation is split into three groups of eight craft to provide global coverage.
A new series of Glonass satellite, the Glonass-K series, is currently in development, Russian space officials have said.
Posted by jayasree at 3:28 PM

when will india develop fifth generation fighter aircraft, our INDIA named as AMCA, FGFA when will these hit skies?