A news item on the  recent genetic study that demolishes the AIT theory is reproduced here as I found the reaction ( given in this report) to the genetic study by a well known Tamil writer Gnani quite appalling. Unable to accept that there were no Aryans and no Dravidians and that no Aryan subdued others, he has doubted the credentials of the researchers and suspects a hidden agenda behind this research. If this is the level of scholarship of popular Tamil writers and their awareness about the developments in intellectual circles, then one can imagine the level of thinking of the reading public. There is no wonder Noboru Karashima, a prominent scholar in Tamil, had said that Dravidian Movement has an anti-intellectual tendency.

This genetic study is not the first study or the only study of its kind that has shown the fallacy of Aryan -Dravidian divide. Nearly 9 genetic studies have already happened stretched over  a decade and they all have come out with the same conclusion that there was no Aryan invasion and that people of India had remained here for 1000s of years and that they only have moved out of India. There are a  number of articles on these studies posted in this blog with the latest one posted yesterday showing the literary inputs on the movement out of India in the last 10,000 years. The results of these studies are available for nearly 3 years now. Wonder when the Tamil speaking Dravidian chauvinists are going to wake up to the reality! 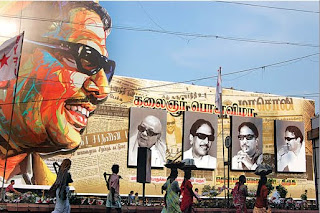 In what could be a major setback to dravidian parties in tamil nadu, an inter-continental research in cellular molecular biology has debunked the aryan invasion theory.

"We have conclusively proved that there never existed any aryans or dravidians in the indian sub continent. the aryan-dravidian classification was nothing but a misinformation campaign carried out by people with vested interests," Prof Lalji Singh, Vice-chancellor, Banaras Hindu University, told DNA.

The findings of a three-year research by a team of scientists, including Prof Singh and others from various countries, has been published by American Journal of Human Genetics in its issue dated december 9.

"The study effectively puts to rest the argument that south indians are dravidians and were driven to the peninsula by aryans who invaded north india," said Prof Singh, a molecular biologist and former chief of Centre for Cellular and Molecular Biology, Hyderabad.

According to Dr Gyaneshwer chaubey, Estonian Biocentre, Tartu, Estonia, who was another indian member of the team, the leaders of dravidian political parties may have to find another answer for their raison d'être. "we have proved that people all over india have common genetic traits and origin. all indians have the same dna structure. no foreign genes or dna has entered the indian mainstream in the last 60,000 years," dr chaubey said.

Dr Chaubey had proved in 2009 itself that the aryan invasion theory is bunkum. "that was based on low resolution genetic markers. this time we have used autosomes, which means all major 23 chromosomes, for our studies. the decoding of human genome and other advances in this area help us in unraveling the ancestry in 60,000 years," he explained.

However, Gnani Shankaran, noted dravidian thinker, said the time for writing the last word on dravidian philosophy has not yet come. "We have to find out the credentials of the authors of this research paper and their hidden agenda. In Tamil Nadu, the dravidian and aryan ties are inter-related. the dalits in our land are the descendents of the dravidian brahmins who were pushed to the lowest strata of society by the aryans," shankaran said.

According to Prof Singh, Dr Chaubey, and Dr Kumarasamy Thangaraj, another member of the team, the findings disprove the caste theory prevailing in India. interestingly, the team found that instead of aryan invasion, it was indians who moved from the subcontinent to europe. "That's the reason behind the findings of the same genetic traits in eurasiain regions," said Dr Thangaraj, senior scientist, CCMB.

"Africans came to india through Central Asia during 80,000 to 60,000 BCE and they moved to Europe sometime around 30,000 BCE. The Indian Vedic literature and the epics are all silent about the aryan-dravidian conflict," said Dr S Kalyanaraman, a proponent of the saraswathi civilization which developed along the banks of the now defunct river Saraswathi.

Yet another genetic study that demolishes Aryan Invasion Theory!

Of course, only an Indian would say the theory is bunk, because, well, he's Indian. Something tells me it has more to do with racism than anything else.

Okay, then. Say it is all bunk. Explain why, when the British Empire arrived, you were all backwards. Or how you had no horses. Hmm?

Yeah, they're a bunch of liars.

If the Dravidians were the "same", there would be no caste system. I find it odd how in one post you have papers saying there is no diversity in India, yet have another that says that India is the most diverse nation, second to Africa.

Even Rhazib Khan would think your theories are bunk.

So which is it? And there most certainly is a Dravidian divide. Genetics answers that.

Max Mueller is still right - you haven't proved him wrong. And citing exclusively from Indian "scientists" who have their own agendas is scientific misconduct.

The above comments by the anonymous reader deserves no reply. It is obvious from his comments that he has no exposure to the genetic studies nor with any of my numerous articles in this blogspot.