These days we are coming across news about falling buildings, killing people. While 3 such incidents were reported in Chennai within a span of 10 days, there is news about deliberate breaking of ancient structures in strife- ridden Iraq by ISIS men. In this current period minor fall of buildings and bridges were reported in other parts of the world too. This made me think that some universal indication must be there for collapse of structures. I went through the list of such collapses given in the Wikipedia and checked the astro maps of them. The results are being shared here.

Basically astrology does talk about death from building collapses or stones falling on one. At the mundane level there is no rule given for fall of buildings. However the pointers for earthquake which cause the collapse of built structures can be extended to building collapses. It is because any building owes its existence primarily to the strength of the earth that holds it. Therefore the astrological combination for earthquakes must have a stronger presence at the time of collapse of built structures. Those factors written by me elaborately in 2010 can be read here.

The basic astro features of earthquake are

So I looked for these features in the major collapses of buildings around the world in which casualties were more than 50.

Looking back, building collapses are recent whereas collapse of bridges and dams were the events in the past. So I had gone through dam or bridge collapses also where the death toll was high.

With this basics in mundane astrology I looked at the probable clues from horoscopic astrology  that can be related to collapse of buildings. The striking combination comes from the distance between Mars and Sun.

According to Brihad Jataka, death will be caused by stones if Sun is in 4th and Mars is in 10th house. There is yet another verse that relates the distance between Mars, Sun and Saturn similarly as above – that is, in Kendra to each other with Saturn in 1st , Sun in 4th and Mars in 10th. (In this case weak moon must be present in 8th) This causes death from blows from rods or clods of earth. What we cannot miss is the Kendra distance between Mars, Saturn and Sun.

Then there is a very important verse that makes a mention of two signs namely Aries and Libra to be associated with malefics. (Brihad Jataka 25-8). These two signs are indeed the main ones in earthquake times. Sun and Mars at 4th or 10th to each other is also repeated in 3 verses for death from falling rocks or soil.

When I analysed charts for major collapses of bridges, dams and buildings in since 1850 till date where the death toll was more than 50, I came in for a confirmation of earthquake rules I stated above. The position of Rahu and Ketu also made a striking presence in specific houses in major collapses. Rahu signifies the earth and its transit across equinoxes and solstices coincided with major collapses.

For instance presently Ketu is crossing the junction of Aries and Pisces while Rahu is crossing the junction of Libra and Virgo. This is the point of Vishuva or Equinox. At the current juncture Sun and Mars are 4- 10 to each with Mars at the 4th house from Sun and Sun from the 10th house from Mars. This is one of the main features in individual horoscopes as told in Brihad Jataka. In addition to these, the earthquake position of malefics is also fully present. Saturn in Libra is aspecting Aries along with Rahu while Mars in Virgo is also casting its 8th aspect on Aries.

Another major position for the nodes was their presence in the junction or close to the junction of solstices. That is, when the nodes were in the junction of Gemini- Cancer and Sagittarius- Capricorn collapses of built structures had happened, provided, the above mentioned earth quake factors were also present. However the Kendra position of Sun - Mars or Mars- Saturn were not always present.

Based on these observations I deduce the following for collapse of built structures. 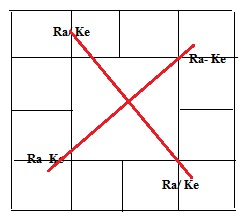 Aries and / or Taurus must be afflicted by malefics.
Scorpio is also afflicted
Mars and Saturn will be afflicting these signs .
At times Sun joins them 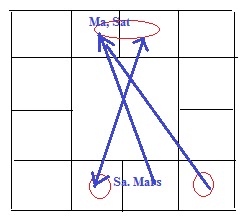 Sun and Mars or Mars and Saturn are in 4th and 10th to each other. This is not a strict criterion. But when such a distance occurs, we have to look for the above features too to assess whether Time is indicative of collapses.

Given below are data of some of the major collapses. I have given the recent collapses in Chennai first followed by other ones.