The 195th day effect in my place of observation will be on 16th July 2016 extending after midnight till 3 AM in the next morning.

The corresponding fortnight will be from 26th September to 10th October 2016.

The 195th day falls in the fortnight that corresponds to the 2nd day of Garbottam. This fortnight is between 5th July and 19th July when there will be 30% of the usual rainfall expected in that fortnight in my place of observation as per the Garbottam features on the 2nd day.

So far the daily weather pattern for this period of July, based on 195th day impact is keeping in line with the 2nd day Garbottam.

If we recap the 195th day impact, the 1st day and the 2nd day showed below average rainfall (around 30% of the season) for the corresponding fortnights.

The 2nd day’s impact period was between 5th July and 19th July. This period was a little encouraging though the rainfall would be less than average.

In this period, only 9th and 10th of July 2016 (corresponding to 3rd and 4th days of Garbottam) indicated rainfall.

Thereafter 3 days would be dry (weak Garbottam on the next 3 days).

On 14th July when Ashada Swati will be there, there is likely to be a weak drizzle. From then onwards till 16th midnight some rainfall can be expected (7th day of Garbottam).

The next day covering the day time of 16th July and night time till 3 AM, corresponds to the 8th day of Garbottam which will be discussed in this article. This day shows encouraging signs of Garbottam for 16th July and also for the fortnight that starts before Mahalaya Amavasa or Navarathri.

The observation of the 5 factors for day-8 are as follows:

(1) Wind:- Though the first part of the day (evening of 5th January 2016) was still, breeze was felt in the morning of 6th January. The gentle breeze continued for the rest of the day. The direction was North and North east. Anusham was the star transited by Moon when the breeze started. It must be windy at this star as a pre-indicator for good rains later and it was.

Result:- This is more than average factor for rainfall in the corresponding period as far as wind factor is concerned.

Result:- This factor is satisfactory.

(1) Terrestrial :- Behaviour of birds and cows satisfactory. Since my area of observation is brimming with water bodies newly sighted after the recent rains, it was a delight to watch the lazy buffaloes plunging into the waters. Certainly the atmospherics is good if we go by the way animals and birds look relaxed and joyous.

(2) Atmospheric :- Of the 12 features noted in my blog on Garbottam, (1) gentle breeze was there throughout (2) clouds were pearl in colour and at times blue tinged. (3) Aquatic shaped clouds were less but clouds were huge and dense and everywhere (4) Wind direction was from the North and north east. (5) Even at noon Sun was hidden behind dark clouds. (6) The evening after 3 PM was cool and pleasant  (7) Sunset was pleasant.

(3) Planetary:- (1) Planets and stars appeared pale. It was surprising how the overcast sky became clear soon after sunset to give way for stars! By 10 PM the overhead stars (particularly Orion belt and its companions) were clearly visible though it looked that horizons were still occupied by clouds. (2) Except Jupiter all the other planets were in Southern declinations. Planets in northern declinations are desirable. (3) Sun was red in colour at the time of sun set.

The last quarter of the 8th day seemed to have strong features of a good Garbottam. To quote Dr B.V. Raman on the chapter on Garbottam in Prasna Marga, “if the ‘pregnant’ clouds appear of the colour of silver or tamala leaf or of blue lotus or of collyrium, then the rain during the season will be profuse. If the pregnant clouds be exposed to the hot rays of the Sun or accompanied with gentle winds, then the rains that follows after 195 days will be excessive.”

This description fits with the sightings after noon on 6th July (last quarter of the 8th day).

This shows that there will be good rains on the 195th day (16th July 2016). Going by the principle of opposites, as the ‘pregnancy’ was noticed from noon to evening, rainfall will be from midnight to sunrise on 16th – 17th July. This 8th day is a memorable one for Garbottam observation like the 3rd day. To cross check with the corresponding days in July, I want to keep the memory of this day by posting here some photos of the sky. 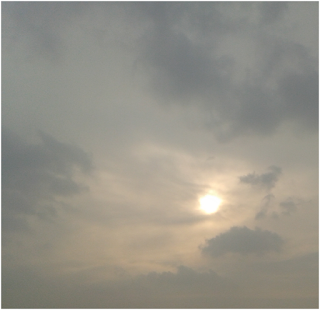 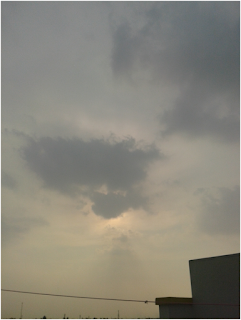 The Sun and the clouds after a few minutes. 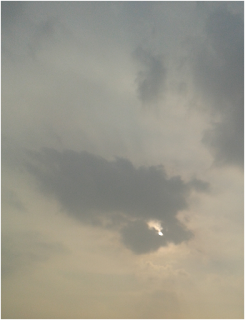 Sun peeping through the dark clouds after a few minutes. 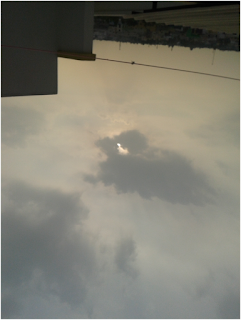 The previous picture inverted – looks like an aquatic bird swimming in water! 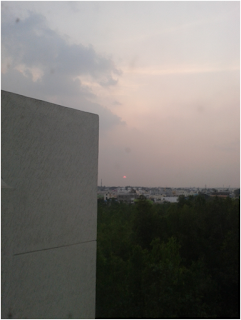 Looks like a perfect Garbottam with wind and clouds!

The corresponding fortnight between 26th September and 10th October 2016 is likely to see rainfall at night time in the last quarter of this fortnight in my place of observation.

Navarathri Puja starts on 1st October 2016. Normally it rains during this Puja in Chennai. The 8th day Garbottam shows that rains will pick in my place of observation gradually after navarathri starts and would see good rains in the last 3 to 4 days of the Puja till Ayuda Puja on 10th October which is the ending day of this fortnight that corresponds to the 8th day of Garbottam.

As far as SW Monsoon is concerned, September 12th September 2016 is one cut-off date as (1) Mercury- Venus closeness ended on that date and (2) the line of planets behind the Sun ended around that date. These two features are rainfall features that came to an end by 12th September. So the peak of the season must be ended by that time.

However on 17th and 18th September 2016, another combination cropped up (Sun, Saturn and Mars in alternating signs) and we have to see how far this brief combination could influence rainfall of the SW season.

On 26th September at the start of the fortnight corresponding to 8th day Garbottam, planetary features in aid of SW Monsoon had become weak. It continues throughout the fortnight.

Though the planetary combinations do not support rainfall during Navaratri, the last quarter of the 8th day Garbottam  in my place of observation shows that  Chennai and its suburbs are likely to receive Purattasi rains in the later part of Navarathri Puja.