P.Susheela’s name in Guinness Book; her songs in our ears, lips, hearts and lives.....

The Melody Queen P.Susheela has entered the Guinness book world records and Asia Book of records as one who has sung more number of songs in Indian languages. 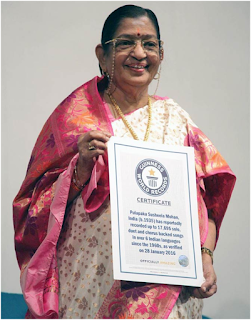 Her voice and the subtle intonation she did depending upon the meaning of the lyrics have made most of her songs hits and super hits. There would be at least one song by her which could have touched the imagination or feelings or life of any listener. To that extent the lyrics played a big role in the success of her songs. Those lyrics got life in her voice and the emotions she effortlessly portrayed through her voice.

This award seems to have come very late though she could have reached the top long ago and would retain the slot never to be surpassed. I could not avoid thinking of Ilayaraja in this context as it was rumoured that he shunned P.Susheela saying that her voice lacks emotion. What a mistaken view from a music maestro!  But later he patched up with her and made her sing in his compositions. But with his arrival in Tamil cinema, the down trend in the career of P.Susheela had started. If not for him, P.Susheela would have crossed even the current mark of 17,000 plus songs.

As far as I am concerned, her song “Oru naal iravu pagal pol nilavu” worked like medicine for me as it made me overcome the loss of my mother at a young age by consoling myself that my mother indeed was singing from heavens for me.... Even today, this song is in my lips and in my heart. The last stanza had all the emotions that make me cherish a hope reserved for my next birth....

This one, “Maalai pozhuthin mayakkatthilE” is something which Susheela herself would find difficult to surpass...

A soul-stirring song enacted by a beautiful Jayalalithaa.

From my choice of songs I am moving to my choice of an article among the various articles on P.Susheela that we are reading nowadays about her Guinness record. This article is from Times of India.

The Guinness Book Of World Records recognises her prolific career, but her USP is quality. 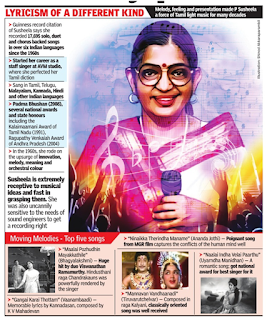 P Susheela has never lost her position among lovers of Tamil films. Her glorious days may have been over but for them Susheela was and still is the archetypal female singing voice. Ask a Tamil who sang “Gangai Karai Thottam”, and he would say, P Susheela, even if he didn’t know for sure. It must have been Susheela. Who else could it have been?

So when the announcement about the Guinness Book of World Records came, it was only a reminder that she indeed is among the most prolific singers in this part of the country. The news has warmed the cockles of the hearts of her myriad admirers, including yesteryear heroines, who have flocked to her residence to express their joy .

Though she is a Telugu, and her film songs in her mother tongue handsomely outnumber her Tamil songs, she was the key female voice of the golden age of Tamil film music. The prolific lyric writer Vali made his debut writing for her “Nilavum thaarai yum” in Azhagar Malaikalvan while SPB of a thousand duets sang his first with her in “Aayiram Nilave Vaa”.

But it’s more the quality of her numbers than the quantity that earned her the love of music lovers.The sheer melody, lyrical significance, musical excellence and popularity of many of her songs have made her an iconic singer. Many of the jewels of Kannadasan, Tamil cinema’s lyricist par excellence, are immortalised in Susheela’s inimitable voice. A winner of many national and regional awards, she is also the recipient of the Padma Bhushan.

Hailing from a musically inclined family in the princely state of Vizianagaram, Susheela acquired a diploma in music in a college in her town and came to Chennai for further studies. Her first singing offer came easily enough with Pendyala Nageswara Rao choosing her for a duet with A M Raja in ‘Petrathaai’ (Kannathalli). Starting out as a staff singer for AVM studios, Susheela honed her Tamil diction and imbibed professionalism. Though she speaks Tamil with a strong Telugu accent, despite her 63 years in Chennai, her songs set a benchmark for excellence in Tamil pronunciation. That’s why Susheela was chosen along with T M Sounderarajan to render the state song “Neeraarum Kadaluduthu” by the Tamil Nadu government in 1970.

The 1950s were competitive times with many female singers in the field, and Susheela had to struggle her way up. That she progressed steadily can be seen from the fact that a musical genius like G Ramanathan trusted her with great numbers like “Mullai Malar Mele” and “Inbam Pongum Vennila”. She was often fancied for dulcet duets with A M Raja with the latter himself opting to sing with her in the enormously successful ‘Kalyana Parisu’ (Vaadikkai Marandhadhu Yeno, Aasaiyinaale Manam).

‘Paava Mannippu’ set the stage for a new musical phase that crowned Susheela as the queen of Tamil film songs. There was an upsurge of innovation, melody , meaning and orchestral colour. As Susheela’s voice shone in melodious songs like “Paalirukkum Pazhamirukkum”, master composers like Viswanathan Ramamurthy and K V Mahadevan tried new tunes to exploit her voice to the hilt.

Susheela was extremely receptive to musical ideas and fast in grasping them. She was also uncannily sensitive to microphone positions and the needs of sound engineers to get a recording right. The latter decades of her career saw a great deal of competition emerging and singer-music composer politics leading to her being sidelined, but she was not to be disheartened. She wisely patched up with Ilaiyaraja after some initial misunderstanding. She is a woman of much poise and reserve but can be scorchingly sarcastic in private. She has a piquant sense of humour too.She once remarked about ragas in the general run of film songs -“One can say they represent an all-India raga. Even if you search all over India, you won’t be able to find the raga!” At eighty , Susheela still rocks.