Update added at the end of the article on prediction of NE Monsoon based on this day.

Tomorrow the 29th of July is important on 2 counts for rainfall prediction. One is that it is ‘Rohini Yoga’ day – a day that is watched intensely throughout the period of moon crossing Rohini star. This day is watched to predict rainfall in the next 4 months that include NE monsoon season for Tamilnadu.

This day occurs every year, but what is additionally occurring this year is that this day coincides with the waning phase of Dasami and Ekasdasi. This combination is called “Aadi-thithi-k-kuri” This is a rare occurrence which was pinpointed in Arcot Panchangam and interpreted to indicate once in 400 years rains.

As far as Chennai is concerned, the corresponding day for 3rd day of Solar Garbottam that started from the evening of 31st December 2015 till the evening of 1st January 2016 was favourable for rainfall between 19th July 2016 and 2nd August 2016. The direction of rainfall would be from South and south west during this period. So far we have witnessed wet days during this period. For Chennai 29th and 30th July must have good rainfall if we go by the daily Garbottam in the corresponding dates of January 19th and 20th of 2016. 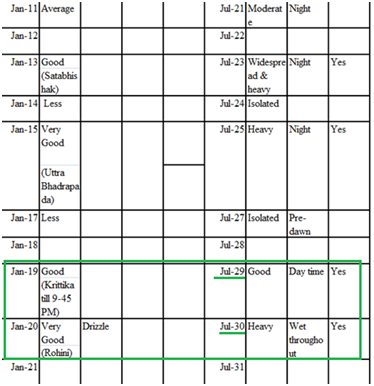 Coming to the first feature called “Rohini Yoga” this concept was first communicated by Narada to Brihaspati from whom it was transferred to Garga, Parasara, Kashyapa and Maya.

This period of roughly 22 and a half hours must be divided into 8 equal parts which comes to roughly 2 hours 50 minutes each. Each part relates to one fortnight each starting from the month of Aavani and ending in Karthigai. According to Rishi Garga, the observation is enough for the day time of Rohini. This day time must be divided into 4 parts with each part relating to the months from Aavani onwards. We can check both, but for commoners like us the day time observation only is possible.

During each part of the Rohini day one must watch the nature of wind and its direction. Winds must be breezy and not wild. Winds coming from North and north east favour good rainfall later. If the winds blow from a fixed direction, there will be rains in that direction benefiting the lands in that direction. In olden days a white cloth was tied on top of the poles to see the nature and direction of the wind.

·       Clouds appearing like huge elephants and dark in colour.

·       Immediately before sun rise and after sun set, clouds must “appear in the colour of  blue lotus and with lightning, resemble the dark Vishnu in cloth of gold.” (Brihad samhita 24-18).
The part of the day when these features of wind and cloud are present will indicate good rainfall in the corresponding part of the next 4 months.

At night moon must be seen on the north east of Rohini star. This ensures good rainfall in the upcoming months. (Moon will be seen after mid night tomorrow at 2-20 AM).

Combination of the 2 features.

While Rohini Yoga does not foresee rainfall tomorrow but only cloudy weather accompanied with lightening and thunder, the Aadi-thithi-k-kuri of Rohini joining Dasami and Ekadasi comes with thunder showers at twilight, particularly evening twilight. It also comes with cloudy weather for 3 days – from the preceding to the succeeding day. The Solar Garbottam shows rainfall on Rohini day and the day after. Let us wait and watch.

PS: Behind all this, a lurking question in my mind is why the rainfall for the current period of Mercury – Venus closeness is not as expected to be abundant. The one feature that seems to mar rainfall for the whole of India is the transit of Saturn in Anusha (Anuradha) star. It is called Vayu nadi that shows windiness but no rains. In fact the winds will carry away the clouds resulting in failure of rainfall. Barring Saturn, other planets are not in afflicting positions. This feature of Saturn also must be borne in mind while predicting rainfall.

UPDATE after watching the day:-

Going by Rishi Garga's rule of watching the day time of Rohini into 4 parts, the first part was cool, cloudy, breezy and even accompanied with drizzles. Therefore rains can be expected in AavaNi. The Garbottam chart for AavaNi for Chennai also shows rains in AavaNi (Aug - Sep)

The 2nd part of the day was hot and the air was still but towards the end it became breezy, cool with clouds covering the sun. This can be interpreted to mean that the last week of Purattasi would see rains. This also tallies with Solar Garbottam for that part of the year.

The 3rd part of the day was hot with no winds. However the end of the 3rd part of the day and the beginning of the 4 part of the day saw good formation of the clouds in south and east and some breezy weather. Towards sunset all clouds faded away and it was reported that it rained in the sea after nightfall. A few places in chennai received drizzles or mild showers at night. No thunderbolts were heard in my place of observation.

This can be interpreted to mean that there will be rains in the 2nd half of Aippasi and the 1st half of Karthigai. (November). The lesser intensity of clouds and breeze show that 2015 like disastrous rains can not be expected this year.

Madam,
I am a zero in astrology and may be this is a stupid question. Is this prediction slocal to Chennai only or can be re-factored based on longitude/latitude?

The table (of Garbottam) is for Chennai for my location of observation. The Aadi thithi-k-kuri must be observed for the entire Indian sub continent. To be more precise, the Rohini yoga was observed in those days throughout India and Aadi-k-kuri was observed in Tamil lands that included south Karnataka and Kerala also in those days.

The rainfall in Bangalore and Hosur come under the effect of Budha- shukra sameepya that is happening in stars Aslesha and Magha which cover the south eastern section of the Kurma chakra whose central axis is in the region of saraswathi river (Haryana/ Rajasthan). But the rainfall experienced in Bangalore and Hosur are not heavy if we compare with how it was 15 years ago. The present floods in those cities are man made.

Having lived in Hosur between 1985 and 2003, I can vouchsafe how the rainfall used to be more than what is experienced in Chennai. (Bangalore also used to get so much rains as in Hosur due to their proximity). Chennai gets only 10% of what Hosur used to get. But there was no water logging in those days in Hosur and even after a heavy rainfall, the roads would become motor-able immediately after that.

I am very much familiar with the water drainage routes of Hosur. From Anekkal, rain water drains through 40 lakes to reach Ramanayakan Eri in Hosur. The last time the Eri was full was in 1990 October- November. After that the Eri was never filled to the brim.

From that Eri, excess water used to gush through the 'madagu' upon which now Velakkani school is standing!

The Madagu water enters Hosur - Bangalore Highway and cuts across it. Thereafter it moves along side the Highway and cuts the Bagalur Road to enter the fields (which are now seen with buildings). From there water moves around the Hillock of Lord Venkateswara and further proceeds towards Kelavarappali dam.

Today this entire route is obstructed with construction of roads, schools and buildings. The water entry route near Railway line into Ramanayakan Eri is now built as a highway with 2 small madagus. Already the school that is standing there was the first encroachment into the Eri in early 90s. When I visited Hosur a few months ago, I could see that days are not far away for a la chennai-floods to happen in Hosur.

Thanks for your predictions madam.

My Question : Will Tamil Nadu receive above normal rainfall this time on NE monsoon ?

@ Arun
Will post an article on NE prospects in a fortnight as I am yet to compile the data I have recorded on Garbottam for Oct, Nov and Dec. From the daily data I was recording, I found that there will be rains in Chennai in the last week of Navarathri, between middle of Oct and middle of Nov and for a week in December. But the intensity will not be high. However the planetary position for these months are pretty good indicating a good NE monsoon. Again there is a hitch here which I noticed in SW period. 2 planets are going to be in unfavourable nadi. Such a condition reduced the rainfall for SW season. This observation in the currently ending season is a good learning on how to interpret the season overall.

My native is 40 km south from coimbatore. This time south west monsoon failed completely in our region (Pollachi, Valparai belt).

Its completely an agricultural zone and North East monsoon gonna to be deciding factor of this belt for upcoming year.

Will your predictions will be accounting for all districts of Tamil Nadu ?

The Garbottam predictions are for Chennai. Planetary predictions for entire India. Read Rainfall check articles in this blog to know more plus the Garbottam articles. You can click the tag Garbottam in the side bar and read. One must the garbottam for one's place. This year (season) rainfall would be less in the regions that normally gets rains and would be above normal where it wont rain at all usually.