I came across an article in Times of India that highlighted the similarities between some Tamil and Korean words. I have reproduced that article below.

Exchange of trade connections during the period of Pandyan King Aai in the 1st century CE is cited as a cause of this infusion of Tamil words in the Korean language. But the Sangam Age Aai was much older.

Another probable connection is attributed to a Korean queen Huh, who was supposed to have taken Tamil words to Korea.

But internet sources tell that Huh was a princess from Ayodhya who married Korean king Suro who founded the kingdom of Karack. Old Korean sources do mention the story of an Indian princess who married the Korean king. There is a memorial for her in Ayodhya near Sarayu river while her tomb is in Korea in Gimhae. Both Ayodhya and Gimhae are to be developed as twin cities with the memorial in Sarayu to be developed as World Heritage site. (Article reproduced at the end).

This princess having hailed from Ayodhya in the 1st century CE, there is remote scope to link her to Tamil regions and words.

In my opinion, around the same time Buddhists from Tamil lands were busy moving around East Asian countries in a bid to spread Buddhism. The Tamil Epic Manimegalai has many references to movement of Tamil Buddhists to those countries in South east and Far East countries. There even exists a Kurma structure in Buddhist shrine in Korea which testifies the Buddhist influence from India. 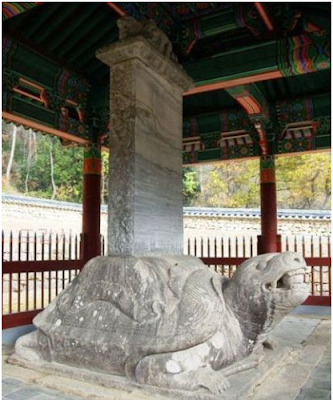 As Manimegalai stands a testimony to the movement of Tamil Buddhists to South East Asian countries, particularly Java islands, there is a better chance of spread of Tamil culture and Tamil words to those countries through them. From there, travel to Korea looks distant but possible. Travel by sea gives an easy access to Korea.

There is another route to Korea from Tamil lands. The legend of Bodhidharma of Pallava dynasty of a migration of a Tamil origin person to China raises the possibility of transfer of Tamil words and culture to China and from there to Korea. There is also a Tamil Siddha by name Bogar who was supposed to be of Chinese origin and migrated to Tamil lands to join other Siddhas. A text by name “Bogar 7000” is attributed to him. All this goes to show that movement between Tamil lands and China was there more than 1500 years ago. From China, access to Korea is easy.  Therefore  I visualise two possible routes of exchange / travel between Tamil lands and Korea as shown in the map below. 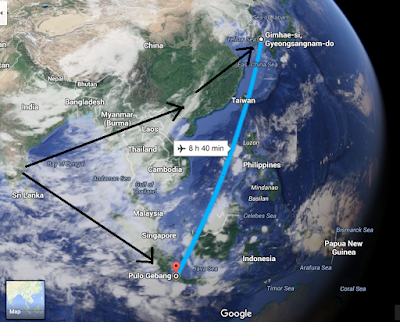 One is from Tamil lands to Java and from Java to Korea. Another route is to China and from there to Korea.

Manimegalai had travelled to Java from Tamil lands. The blue line shows the route to Korea from Java. The Buddhists of Tamil origin could have travelled to Korea and other regions of Far East to spread Buddhism. They could have travelled through coastal routes to reach Korea instead of attempting straight long distance sea travel. This movement could have happened over a long period and in gradual steps.  From them Tamil words and culture could have entered Korea.

“Appa”, called out a voice as the consul general of Korea Kyugsoo Kim was taking a stroll on the Mahabalipuram beach.His first impulse was to look back, thinking it was his son calling him.Seconds later he realised that Tamils like Koreans also address their fathers as Appa. The incident inspired him to start researching on words that are common to both Tamil and Korean languages. 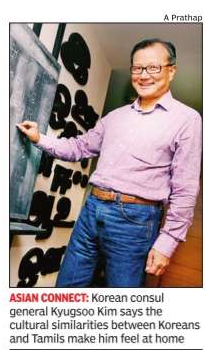 Although a possibility of the two cultures sharing a common origin has been disputed due to a lack of genetic and anthropological links Kim, who will soon give a presentation on the topic during the Madras Week celebration, asserts that Asians in general share a lot of values and are indeed genetically related. He adds that India's mission to capitalise on the growth potential of Asia has to be studied and developed so that South Korea and India can be considered as sister countries.

During his research, Kim came across about 500 words in Tamil and Korean which share the same meaning and pronunciation. For instance the Korean word ` Apahada' which is `Avadhipadu' in Tamil means the same --`in pain' or `suffer'-in both languages. Similarly `Vanakam' (hello in Tamil) in Korean is `Vangapta', `Manaive' (wife) is `Manura' and `Nal' (day) is also `Nal'.

Not just words, the two cultures share a lot of cultural and traditional practices too. Just like Tamils, Koreans have the habit of leaving the slippers outside the house and bowing before the elders as a sign of respect. And when it comes to syntax and grammar, Korean and Tamils share the same sentence structure. For example, `I am cutting the grass' in Korean is `Naan pul-ul-beda'.

Kim says another thread of similarity could be a stone that Huh, the first queen of Kaya kingdom, took from India to Korea. This could be the `Illavattakkal', the practice of a man lifting weight to prove his strength. The old Tamil ritual involved a young girl asking her lover to lift a heavy stone to prove his strength. These stones are still found in interior villages of Tamil Nadu, says Kim.

“When a baby is born in Korea, we have green chillies hung outside the house to ward off evil spirits and I find the same practice here too. It is remarkably surprising to see girls playing five stones here just like Korea. These are some things that goad me to look deeper into the cultural similarities and I must say I feel completely at home here,“ he says.

He substantiates his argument by citing examples of Korean food which are similar to the Tamil cuisine. Rice cakes, rice puff and lentil cakes are a few to name. “There must have been an exchange of cultural habits and cuisines when people from both the cultures migrated to each other's' country”, he adds.

The connection between the two cultures is believed to date back to the reign of King Suro and Ayi of Pandian Kingdom in CE 45. Experts don't rule out the possibility of queen Huh taking Tamil culture to Korea with her when she left India.

Kannan Narayanan, a professor in AIMST University , Malaysia and an expert in Tamil-Korean heritage, says the Koreans are as emotional as Indians and have the same affinity for bonding and intimacy like Tamils.“Even the smallest similarity is something we have to be really proud of. We just can't have a meal without pickle and they too can't have food without it. The Koreans believe they have Indian ancestors and the queen who migrated from India may have been highly influenced by the Tamils.“ He adds that more research should be done in the area to strengthen the relationship between the two countries.

The memorial of Korean princess Huh Wang-Ock along the banks of river Saryu in Ayodhya will be developed as a world heritage site.

And if all goes according to plan, Ayodhya and the South Korean city of Gimhae (Kimhae) will be developed as sister-cities. 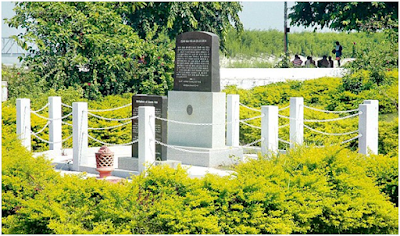 The memorial of Korean princess Huh Wang-Ock in Ayodhya

Kim Cheol, a former minister in the South Korean government, is in Ayodhya to discuss the related issues with the local officials. He will also meet Prime Minister Narendra Modi and Uttar Pradesh Chief Minister Akhilesh Yadav to take the plan forward.

“It’s a heritage site for us. But we want to develop it to let the world know of the historic link between the two countries,” he told media persons.

Brijpal Singh, regional tourism officer, said: “We have released Rs 3 crore for this purpose. South Korean architects will survey the place and prepare an action plan.”

Legend has it that nearly two thousand years ago, a 16-year-old princess from Ayodhya visited ancient Korea. She was given the name Huh Wang-Ock after she married King Kim Suro, founder of the Korean kingdom of Karack.

The ancient Korean book “Samkuk Sagi” narrates the story of the Indian princess. Her real name is not mentioned anywhere. While her memorial is located in Ayodhya, her tomb lies in Gimhae.
It is believed that the stones used to build the tomb were sent from Ayodhya to Korea.

Gimhae Mayor Song Eun-Bok had visited Ayodhya in 2000 with a similar plan. It didn't materialise, but he had inaugurated the queen’s memorial at that time.

Later on, an agreement was signed in March 2001 to develop Ayodhya and Gimhae as sister cities. Now, a fresh initiative has been made to connect the two cities culturally.