Tomorrow  is Full Moon coming in the month of Aashadha or Aadi.  This is an important day for Rainfall prediction. In 2 of my earlier mails I had written about the importance of this day. I am reproducing it here. 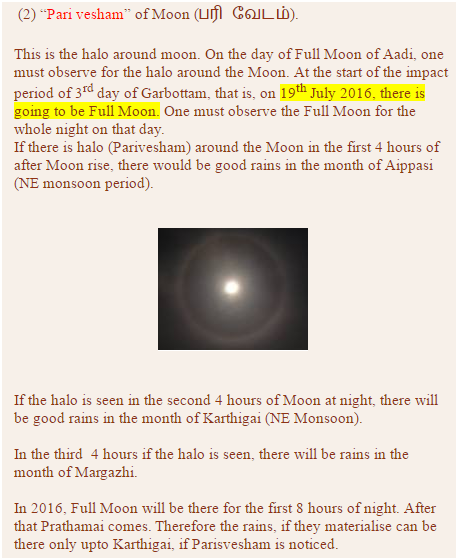 Full Moon starts from 4-40 AM in the morning of 19th July (today). Today evening (18th) Moon was glowing with Parivesham till 8 PM. We have to see if this repeats tomorrow (19th). Scientifically Parivesham is formed around moon if the air is moisture laden. As per Rainfall astrology, the thickness and glow of the Parivesham determines how the days are going to be with reference to rainfall.

As the Full Moon is passing through 8 hours after Moon rise, the halo around it would reveal the rainfall prospects for Aippasi (Oct- Nov) and Karthigai (Nov- Dec). Interested persons may watch for this halo from their place of observation.

Another observation on this Aashadha Pournami pertains to the breeze / wind direction. Soon after sun set  (on Aashadha Full Moon), one must come in the open and observe the direction of breeze / wind. Wind flowing from East or North East is ideal for good monsoon in the upcoming days / months.

Wind from North-west is the next better thing to happen for good rainy season. Wind from other directions indicate scanty rainfall.

Another important date that comes closely now is the day of Purva Bhadrapada (Poorattadhi). This usually occurs on the Chathurthi day that comes after Aashadha Full Moon. It must rain on this day to ensure good rainy season for the rest of the year. This year this day starts from 2-37 PM on 23rd and ends at 1-27 PM on 24th July.


PS:- Read the latest update on rainfall check in Part 4 by clicking here.

Halos around the Sun and the Moon

Astrology of Halo of the Moon

In olden days, this day of Aashadha Pournami was brimming with activity with farmers coming to meet astrologers with a small quantity of the seeds of planets that they want to cultivate for the upcoming season.

At the time of Moon rise Pujas were done for "Satya vaak devi Saraswathi" after which the astrologer would start weighing the seeds in a balance by invoking the Satya vaak of Saraswathi. The same seeds would be weighed again in the next evening (Prathamai at Moon rise) to see if the weight has increased or reduced.

If the weight has increased for a particular plant-seeds, that planet would be cultivated. If a set of seeds weigh less, that plant would not be grown.

This shows that excess moisture is expected to be present on this day of Aashadha Pournami. That moisture increases the weight of the seeds. Those that have absorbed the moisture are supposed to do well and are cultivated.

Those seeds that neither weighs more nor less, are not supposed to perish or decay. That is the rationale.

Even waters from collected from rains, wells, rivers and ponds were weighed to know whether they would be benefited by the rains. The weighing is done for two days as mentioned above and then compared.

If well water weighs more in the next day (prathamai), there will be no rains in winter.

If rain water weighs more the next day,  moderate rains are predicted.

If tank or lake water weighs more when weighed the next day, there will be abundant rains.

To my shock and disappointment, I could not see Full Moon at all till now in my place of observation. The sky is overcast and the moon was seen as a hazy and dull substance for some time around 8 PM.

More disappointment came from the wind-front. The air was absolutely still all through the night till now. I am scratching my head how to interpret it as there is no clue given on still-air condition in Brihad Samhita. Just hoping to see some info on wind direction from meteorological sites. Any flow from North, North east and east is very good. Moderate results for wind from North west, but nothing good for other directions.

Anyway, the observation pointers are not one and only-one in astrology.
Looking for rains on 23rd and 24th is the next observation step to assess NE monsoon.
Thereafter 29th July is another important observation day of Adi- thithi kuri which is also known as Aashadha Rohini Yoga day. I will post the details on 28th July.

So far the daily Garbottam observation (which I am yet to post) shows average rains for Chennai in October and better rains in November and less rains in December. Overall it is average NE Monsoon as far as Chennai is concerned whereas planetary conditions are quite good for NEM at that time ensuring  good prospects for other parts of east coast.

It had rained in my place after Pournami was over / coming to an end. Though the rain was mild, it had cooled the day well and one can feel the moisture laden air around. Going by the 'weigh the seeds' technique, the present climate would easily make the seeds weigh more than yesterday (Pournami). That means, the upcoming season would benefit crops. In other words, there is no failure of rains particularly in Karthigai.

There was no rain in most parts of Chennai on 23rd- 24th July - the day of Chathurthi though it was often cloudy. Rains on this day would indicate very good NE Monsoon. However rains were reported in many parts of interior Tamilnadu.

i observed the halo around the moon at my location in malaysia at moonrise ..... dont know if those in south india saw the same

Moon may not be seen with a halo at all places. Where the air is laden with moisture, the moon in that location is seen with a halo. Closer halo means its raining in far away places from the place of observation. Halo at a distance means rainfall in nearby places. Since you noticed halo from your place, just check whether there was rainfall in the surrounding but far away places from your place. For details just check the 2 articles I have given in the above blog as related articles.

The current article relating prediction to halo and wind direction is applicable to Indian sub continent only, to predict its monsoon season.