The month of April marks the start of the New Year in ancient Indian context that primarily coincides with the beginning of the rainfall season for the country as a whole. Though the date of New Year differs from region to region in India, what remains common is the planetary transit that indicates rainfall but it must be supported by local Garbottam.

For example the day of New Year for Tamilnadu and Kerala marks the entry of the Sun in the star Aswini in Aries. When sun moves across Aswini, it is said to be in Vayu nadi. This is supposed to bring rains accompanied with winds. This lasts till the Sun crosses Aswini which normally takes 13 to 14 days. This means that in normal course, the fortnight following the start of New Year must see pre-monsoon showers in the form of thunder storms. This New Year being applicable to Kerala and Tamilnadu, these showers must in normal course benefit these two States.

This year the month of April 2017 comes with both rainfall yoga and deficient yoga in each category with fairly good strength. In other words there is going to be a tug of war between these two. In between these two extremities, there are two moderate yogas and a couple of transits that help in sudden rains. Before detailing them, let me show in the form of horoscopic diagram the current nature of planetary transits as we enter April. 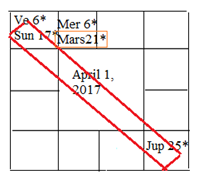 ·       Jupiter in opposition to Sun is a strong deterrent for rainfall. Even since Sun entered Pisces (on 14th March) this opposition started.

·       Another deterrent is the opposition between Venus and Jupiter throughout March and April too.

·       As we begin April, yet another dry and heat related feature is dominant in the sky. It is the presence of Mars ahead of all the planets.  Right from 25th August in 2016, Mars had been moving ahead of all the planets and this comes to an end only on 29th July in 2017. This forward motion of Mars discourages rainfall and scorches the land. Presently its transit across Bharani causes excess heat.

·       The current heat wave is attributed to Mars in forward position followed by Mercury in Fiery sign of Aries. Mercury is connected with winds and Mars with heat in astrology. When they join in fiery sign and are ahead of other planets they cause unprecedented heat waves on the land.

·       However on 13th  April 2017, Mars moves over to the next sign. So until then unprecedented heat wave will be felt. Mercury still continues to be in Aries but on 10th  April it enters into combustion with Sun. This marks the arrival of first rainfall of the pre-monsoon season. The entry of Sun into Aries (and in Aswini) closely after that on 14th April is supportive of pre-monsoon showers.

Earlier in an article written on 27th Dec 2016, I showed the dates of rainfall yoga supported by Venus- Mercury closeness.  As per that, it rained in March. The next period starts in April.

The major rainfall spoiling yoga is Mars in front of all the planets. Particularly at a time the above mentioned rainfall yoga begins, Mars also begins its sojourn through star Rohini. Mars in Rohini and Arudra would scorch the land. Infact Mars in Rohini is the most feared transit which has seen unrest, wars and terror activities.

In between these two extreme yogas, there are some transits that favour rainfall. Finally it all boils down to the local Garbottam in a place. The list of dates of importance to rainfall activity in April 2017 is given in the table below.

Only after 21st April, there is support from planetary combinations (Mercury- Venus closeness ). And we have to check local Garbottam also.

The corresponding Garbottam period for April 2017 is waning phase in Purattasi and waxing phase in Aippasi.

The corresponding dates / months for this are
2nd half of September 2016 and first half of November 2016.

The interesting feature is October 2016 is completely out of picture in determining rainfall in April this year. It must be recalled that October 2016 was almost dry and cyclone Kyant also failed. But it did bring some overhead clouds which can be counted on as Garbottam. But October is out of reckoning for gauging rainfall this April!

If it is assumed that cloudy weather was present around 26th September 2016, it is possible to see some isolated rainfall after 7th April in Chennai.

November 2016 had remained more or less dry, Only on 13th November 2016, it had rained in my place of observation.  Some cloud patches around that date could give isolated rainfall to Chennai in the last week of April.

(1) The first rainfall of this month was experienced in J & K on 6th and 7th April. Though rains were expected in Kashmir on 10th, as per the above table, in reality it occurred on 6th and 7th.

The probable explanation is that Moon was in cancer (its own sign which also happens to be watery sign). All the other planets were in unfavourable positions, thereby reducing the quantum and area of rainfall.

(2) Rainfall was fairly widespread and also in isolated pockets in NE India on 10th April But such rainfall was experienced in days prior to 10th also.

(3) On 15th April, cyclone Maarutha formed as a tropical Depression in the Bay. It moved NE and made landfall in Myanmar on the night of 17th April.

(4) Ever since Sun entered Aries, the temperature had risen high in many places in India. Between 16th to 19th, heat wave alerts have been given. The main cause must be to do with forward march of Mars ahead of all planets and Sun in fiery sign. Initially I thought that heat wave will come down once Mars moves out of Bharani. But reality check shows that it is not so.

On 20th Mercury crosses Sun backwards which results in Sun and Mars to be one behind the other, and ahead of all the other planets. In normal circumstances we interpret it to cause severe heat wave. But then from 20th onwards, the gap between Mercury and Venus is going to reduce thereby causing a rainfall yoga. It remains to be seen how this fructifies or balances with the simultaneous closeness of Mars and Sun ahead of others. Thunder storms due to "veppa chalanam" or dry aandhi winds might result from this diametrically opposite combinations.

Good evening maam..i have a question..now weather models indicate a tropical system(may be depression) to form after april 14th..some models take it to tamilnadu..some models takes to myanmar/bangla(moving away from us)..if the tropical system moves away to bangla/myanmar,then heat wave will affect tamilnadu early..Already most of the lakes are dried..it is very difficult for the ppl to survive if we prolonged heat wave conditions..is there any indications of heat wave affecting tamilnadu(especially coastal areas)..or is there is any chance of rains like in 2016 may..pl clarify maam..with your answer we can find where the tropical system will move..

Chances of good rainfall come only in December for TN. Till today, the daily Garbottam is not showing any good rains till beginning of November, barring a couple of showers in August and October. The situation is indeed grim. The chart I have displayed in the above article stands. As per that rainfall period begins from 20th April, but chances are less for Chennai to get rains from the system that is likely to develop on 20th.