Dhananjayans, the legendary Bharatanatyam couple known for making innovations in dance, are now making waves in ad-sphere as ‘peaceful’ and lovable couple who are into their first trip to Goa in 35 years! It is so in reality too, says the couple.

Acting comes naturally to this couple who have been into dancing for more than half a century. But what they are doing in Vodafone ads is something incredible and every bit enjoyable by the viewer. It is not just acting or they being soulmates in real life, but something else that make these ads so enjoyable.
http://epaperbeta.timesofindia.com/Article.aspx?eid=31807&articlexml=When-the-Dhananjayans-rode-bikes-made-tattoos-10052017006025

When the Dhananjayans rode bikes, made tatoos. 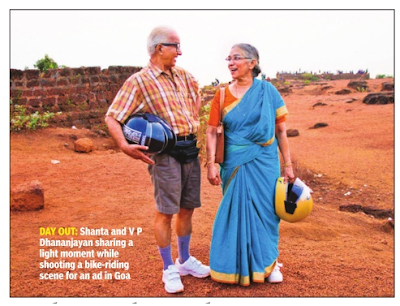 A month ago, veteran Bharatanayam dancer couple V P Dhananjayan and Shanta Dhananjayan (known as the Dhananjayans) had just got back from a performance when their son C P Satyajith, an automobile photographer called to say that they need to fly to Goa to shoot for a commercial. An ad firm Satyajith knew was shooting an advertisement for a telecom company, and they wanted an elderly couple from Tamil Nadu to play the central characters.

"We thought we could give it a try when we heard of the proposal,” says Dhananjayan, who has earlier appeared in the commercial of a famous paint company. But only after landing in Goa did he realise what was in store. The shoot demanded that he wore a pair of trousers and rode a motorbike -two things he had never done before.

“The ad team tried to teach me how to ride a motorbike as it was an important scene in the script. They managed to get a three-wheeler scooter to train me," says the 78-year-old. His riding lessons and falls continued until Dhananjayan found his body double in Milton -a passerby, who rescued him when he lost his balance while shifting gears during one of his riding sessions.

For the couple who have been performing together for more than 60 years, the six-day shoot was an opportunity to go off the beaten track. It was also the first time the two appeared together in a commercial. What interested the couple the most was the professionalism shown by the ad team in handling even the minutest of details. “I had to change my saree four times for a particular scene. The director was finally happy when I appeared in a green one,“ says Shanta. The couple, founders of the Adyar-based dance school Bharata Kalanjali (1968) won the Padma Bhushan in 2009 for their contribution to Bharatnatyam.

Dancers are trained actors. But was it challenging facing the camera sans the mudras and the costumes? “We do act while dancing, so acting was not that difficult. But the language of acting was different here. Our facial expressions, feelings as well as the timing of an expression or a gesture were more important. We had to look at the minutest details to bring out the perfect expressions. Besides, as our shots were accompanied by a number of separate shots, our acting was required to match up with the other shots. There were a number of re-takes to reach the target,” says 74-year-old Shanta.

The first scene of the commercial shows Dhananjayan as a retired man who is visiting Goa as a tourist. “I don't wear pants, but I had to wear one for the commercial. I changed inside a small room at the Vasco da Gama station,” Dhananjayan says.

The commercial has a scene where the duo is seen making tattoos. For another scene the couple had to climb the ruined steps of the Chapora Fort, now known as `Dil Chahta Hai' fort after the blockbuster Hindi movie was shot there in 2000. “Renovation was on so it was difficult for us to climb the stairs covered in sand. But we managed,” says Dhananjayan For them, the most adventurous part of the Goa sojourn was when they did paragliding on the beach -a part of the ad. “There was a trainer who taught Shanta the basics of paragliding. It was a tough scene and took some time for us to finish. But, we enjoyed it,“ Dhananjayan adds.

“Can you believe we’ve travelled all over the world, but we’ve never been to Goa?” laughs Shanta Dhananjayan, as she leads us into her immaculate drawing room.

An unexpected call from advertisement director, Prakash Varma, had Shanta and husband VP Dhananjayan on board a flight to Goa the very next morning to shoot for Vodafone’s new series of IPL advertisements.

“We were asked to do so many things we’ve never done before — parasailing, riding a scooter, and partying on the beach, for example. The crew at Nirvana Films was rather surprised when we said we were game for it all,” Dhananjayan says.

The legendary Bharatanatyam exponents, fondly known as Anna and Akka by their students, have been setting trends ever since they entered the world of natya .

Having left the lush grounds of Kalakshetra almost 40 years ago to establish their current institute, Bharata Kalanjali , the Dhananjayans are no strangers to new beginnings. “We do not make our decisions with the mindset of wanting to set trends, necessarily. But we hope to show young artistes that they can confidently take risks and be part of some amazing projects,” Dhananjayan says.

They prefer to lead by example, and the six-part advertisement, coined with the hashtag ‘MakeMostofNow’ has the Padma Bhushan awardees-turned-actors venturing into unexplored territory. “I was asked to ride a scooter a day before the shoot — unfortunately, I have never ridden one!” Dhananjayan exclaims. With a little last-minute training, and the sudden appearance of a body double that Dhananjayan calls “a miracle”, the crew was able to get the shot without a hitch.

From teaching Shanta how to parasail, to getting the couple to groove with local tourists on a Goan beach, the finished product shows the two natyacharyas as we have never seen them before.

“We have done some advertisements previously, but we were excited to be able to play characters that go through a journey,” Dhananjayan smiles.

The excitement on their faces is childlike, and evident as they detail the six-day filming process. And yet, there is a level of professionalism that reminds us of who they really are. “We are always willing to try something new, as long as we are comfortable with the team and the project, and it is executed in a dignified manner,” Dhananjayan tells us.

Beside him, Shanta beams, adding, “the crew made us feel so, so comfortable. They took such good care of us, holding our hands and feeding us non-stop!”
Essaying the role of the Balakrishnans, the Dhananjayans were a perfect fit for the conceptualised advertisement. “Our son Satyajit has a friend who was involved with the project, so when they were trying to find the right couple, they felt that we would fit the parts if we would be willing to do it,” Dhananjayan says.

He says their comfort, both on and off screen, was simply an added benefit.

“They wanted a real-life couple, not a pair of actors. And for us, the decision was easy. We finally had a reason to take our long-awaited Goa trip,” he smiles.

Despite the years of experience that the couple has accrued on stages globally, they say that being in front of the cameras is an experience unlike any other. “There was so much attention given to every detail, and even the most minute of things, like a corner of my sari being crinkled, was noticed by the director,” Shanta says. “From continuity, to the multiple angles that they use to shoot, the crew is so disciplined. Everything runs so seamlessly,” she adds.

As they returned from their week-long shoot, the couple was unaware of the waves that the advertisement was already making.

Then they began to see hoardings spring up around the city. “We began getting calls from friends and family, both in India and abroad, telling us how cute we looked,” Shanta smiles.

As the couple reaches their eighties, they say it’s never too late to innovate. A question about a future in film is met with hearty laughter. “If it’s an award-winning role that I like, maybe!” Dhananjayan jokes. Shanta smiles, adding, “We never knew that we would be part of something so special. Who knows what the future holds?”