Tribes who fled from India and peopled West Asia and the probable origin of Zoroastrianism explained from Mahabharata.

The genetic and cultural similarities between people of West Asia and India can be accounted for by some of the migrations mentioned by Krishna in Mahabharata (2-14) The context was post-Jarāsandha and Krishna suggesting to Yudhishtira to conduct Rajasuya yajna. Krishna narrates the series of troubles faced by his clan (Yadava – Bhojas) on account of Jarāsandha and where they had gone in a bid to escape the wrath of Jarāsandha. Some of the names and incidents mentioned by Krishna can be cross-checked by other sources, offering proof of historicity of those and other references. There are some who were residents of western section of India beyond the Indus. A list of all of them is given below with cross- references wherever available.

Those who were friends of Jarasandha. (Some of them were located outside India)

He was a vassal of Jarasandha as per the description. He was affectionate towards Yudhishtira and was a friend of Pandu, says Krishna.

It must be noted that a king almost by the same name ruled parts of Persia. He was Bagadates I, who lived in the 3rd century BCE and was supposed to be an indigenous ruler of Persia. He belonged to Persis (Fars) in present day Iran. Seleucus I Nicator was his contemporary. 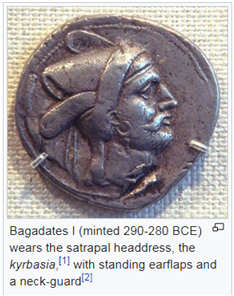 Coins of Bagadates show him as standing in front of Zoroastrian fire altar or sitting with a staff. (below)

The phonetic similarity with Bagadatta, mentioned by Krishna as powerful king of the Yavanas cannot be dismissed lightly, as Bagadates means ‘Given by God’ in Old Iranian. The meaning is the same for Bhagadatta also. Datta means given. Bhaga is another name for Sun. Bhagadatta is he who has been given by the Sun. Bhagadatta as a friend and vassal of Jarāsandha and as an old friend of Pandu, in good relationship with Yudhishtira can be expected to have taken back home many Vedic practices and principles. From Krishna's words, it is known that he had a special relationship with Jarāsandha.

The phonetic similarity between Jarāsandha and Zoroastrian lends credibility to the view that the religious codes followed by the followers of Jarāsandha came to be known as Zoroastrian religion or sect. Almost all the friends of Jarāsandha were in the West. Those who shared friendship with Jarāsandha but preferred to stay in the west followed the same Vedic religion of Jarāsandha, but some of them kept off from mainstream Vedic India. The isolation caused by this could have given rise to their Vedic life becoming different in due course.

The Vedic knowledge they had taken with them had become stagnant or mutated in course of time in the wake of reduced connection with mainland India after Jarāsandha was gone. That is how we have come to see some similarities between Zoroastrian Avesta and the 8th Mandala of Rig Veda. (refer Shrikant Talageri)

The 8th Mandala is unique in that the name Krishna is mentioned at quite a few verses. {This will be written in another article}. What is being highlighted here is that parts of 8th Mandala of Rig Veda was formed in Krishna’s times or a little later and people who have gone to the west of India had knowledge of it. With passing of times, parts of that knowledge had found their way into Zend Avesta.

Now continuing with other names,

10. Purujit, maternal uncle of Yudhishtira was favourably disposed to Jarāsandha. (related to Krishna)

11.  Paundaraka and Vasudeva of Chedi.

Those who fled to the West for fear of Jarāsandha

10. the Kuntis (till this all were related to Krishna)

Those who fled to South (India)

Those who fled in all directions

Krishna also fled to the west. But this territory is Dvārakā!

Krishna says that 18 branches of Yadavas left along with him to start a new life in Dvārakā. He mentions this twice in this chapter in his conversation with Yudhishtira.

It must be noted that exactly 18 kings related to Krishna left for Tamil lands around 1500 BCE which is the date of decline of IVC.

Whatever similarity is found in excavated regions of Tamilnadu and Kerala with IVC is due to this migration to the south.

Any interpretation of genetic similarity with people of south and north India with regions west of the Indus must take into account these dispersals.

Sanskrit version of the chapter: http://www.sacred-texts.com/hin/mbs/mbs02013.htm


* Raghu Vamsam authored by Kalidasa says that King Raghu, the ancestor of Rama went to Parasīka (Persia) during his Dig-Vijaya and brought it under his control. This is proof of connection with Persia even before Ramayana times. Bhagadatta’s cordial relationship with both Pandu and Jarāsandha alike could perhaps be the result of a conscious effort to keep up good relationship with powerful kings of Bharat to avoid any hostility. That perhaps continued till the times of Seleucus Nicator under whom Bagadates I served as a vassal.