India as the base of Asian populations (genetic study)

A study of Human genetic history done across 10 Asian countries namely, India, China, Japan, Indonesia, Malaysia, the Philippines, Singapore, South Korea, Taiwan and Thailand – has revealed that people of all these countries have originally spread out from India! The initial source for the people in India was from Africa that happened about 50,000 years ago. This is yet another important discovery that strengthens another recently published genetic study that showed common ancestry for all Indians.

The news reports about this discovery are reproduced below.

However there is a major flaw in the understanding of these migrations according to me.
Going by the current topographical outlines of India, it is said that originally people ‘migrated’ from Africa to India. The researchers have failed to look back in the ancient past when Indian sub continent was extended upto Africa and far down the South of the Equator. They refuse to acknowledge (or they may even be unaware of) the literary evidence in Tamil of an extended India in the past. In such a past, south east nations, India, Australia and Africa were geographically closer to each other. The migration or exchange of people between these regions must have been easier then. That must explain how the people of other 9 countries have connection to India. This was until 10,000 years ago.


According to Tamil texts, the first wave of sea- rising and submergence of vast expanses of land happened 10,000 years ago. That must have separated south east Asia from India and India from Africa and Australia. Marine and other studies will substantiate this view of the Tamil texts.


The 2nd wave of submergence had totally cut off India from other lands. Even then India had extended upto just the South of equator.


The 3rd wave of submergence happened 5000 years ago which defined the current sea boundaries of India. The migration or spread of the ancients to Japan or south east Asian countries must have happened through land before the first submergence. The Chinese might have been concentrated in the north east corridor of the vast Indian mass even at that time.

From the Hindu concepts of Daksha prajapathi we deduce that evolution of man happened first in the South and around Meru. 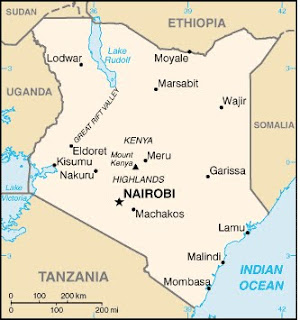 Going by the description of Meru, we come across a place called Meru in Mount Kenya in Africa. This place is near equator where people called Ameru have been living.


This could probably be the Meru told in Hindu texts. Early human evolution was around Meru. Studies on the people of this place might yield better insights
http://en.wikipedia.org/wiki/Meru,_Kenya

When the extended India was close to this part as also with south East Asia and Australia, the ancestors of present-day people of the 10 countries had spread through this land. When lands were cut off due to submergence, the people also were cut of from one another. This is a plausible explanation of how they all come to be related to the people of India as found in the recent study. 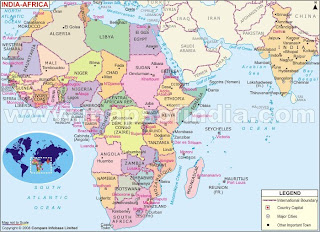 Another important clue from Tamil texts is that Arabian sea is an old sea, where as the Bay of Bengal was a dug-out sea.


The Arabian Sea must have been a land trapped one like Caspian Sea in earlier times before the extended landmass got separated.

BAY OF BENGAL was a high-land once!

SETHU – Digging of the Bay of Bengal ended here!


BANGALORE: The ancestors of most Asian populations, including the Chinese and southeast Asians, came from India, a new genetic study across 10 countries has revealed. The study found that humans first migrated to the Indian subcontinent from Africa some 100,000 years ago and then spread to other parts of Asia.


"When humans moved out of Africa, there was a migration to India and from India to southeast Asia and then east Asia, and finally to the Americas. So, all Asians have a genetic connection with India," Mitali Mukerji, a scientist from the Institute of Genomics and Integrative Biology who was in the team, said.


The study — Mapping Human Genetic History in Asia — was conducted in 10 Asian countries including India. Apart from the Council of Scientific and Industrial Research DG Samir Brahmachari, the Indian study team comprised eight members and some students from IGIB, New Delhi anthropologist Partha Majumdar and researchers from the Centre for Genomic Applications.


The study contradicts earlier findings that humans directly went to East Asia from Africa. The study found remarkable similarities between the Dravidian population of south India and specific populations of Malaysia and Singapore. More interestingly, north Indians and Dravidians, too, were found to be genetically connected — meaning there are similarities in their gene structures.

India is the source of genetic diversity : Study


A study done by a consortium of geneticists from 10 Asian countries shows that Indian genetic diversity is the basis of other population in Asia. It says that over 50,000 years ago there was a first single stream entry of humans into India from Africa. From India the human population settled in South-East Asia and from there some of then moved to east and central Asia.


The first ever study of human genomes of Asia conducted by Human Genome Organisation (HUGO) Pan-Asian SNP Consortium also says that some of the Indian population showed evidence of shared ancestry with European population and this is consistent with the expansion of Indo-European speaking population.


This HUGO’s Pan-Asian initiative is a consortium of 90 geneticists and 40 institutions from 10 Asian nations, namely China, India, Indonesia, Japan, Malaysia, Philippines, Singapore, South Korea, Taiwan and Thailand. It collected samples from 1,928 unrelated individuals representing 73 groups of people from 10 countries and 10 linguistic lineages from member countries as well as from two non-Asian population groups of Africo-American and Caucasian ancestry.


HUGO Pan-Asia SNP Consortium study has been recently published the reputed Science magazine (vol 326) in December 11, 2009
According to the study modern humans evolved in Africa and spread across the world, adapting locally to the selective pressures of climate, food sources and pathogens.


“Tracking genetic variations through human migrations provides clues to evolution of diseases and phenotypes. India can be a crucible for clinical trials of medicines suitable for Asian population,” said Prof Samir Brahmachari, director-general of the apex Indian scientific body, Council of Scientific and Industrial Research (CSIR). Along with Prof Brahmachari, Dr Mitali Mukherjee of Institute of Genomics and Integrative Biology and Dr Partha P Majumdar, head of the human genetics unit of Indian Statistical Institute were represented in the consortium from India.


According to the study the most recent common ancestors of Asians arrived first in India. Later some of them migrated to Thailand and southwards to the land known today as Malaysia, Indonesia and also eastwards to the Philippines. The first group of settlers must have gone very far south before they settled successfully. These includes the Malay Negritos, Philippine Negritos, the East Indonesians and early settlers of the Pacific Islands.Thereafter one or several groups of people migrated North, mixed with previous settlers there and finally formed various population groups we now refer to as Austronesian, Austro-Astiatic, Tai-Kadal, Hmong-Mien and Altaic.


“This study is a milestone not only in the science that emerged, but the consortium that was formed. Ten Asian countries came together in the spirit of solidarity to understand how we related as a people and we finished with a truly Asian scientific community. We overcame shortage of funds and diverse operational constraints through partnerships, good will and cultural sensitivity,” said Prof Edison Liu, executive director Genome Institute of Singapore and President of the HUGO.


India has recently achieved a major breakthrough in human genome sequencing. Scientists at CSIR’s affiliate organization, Institute of Genomics and Integrative Biology (IGIB) sequenced the human genome of an anonymous Indian citizen. The human genome has 3.1 billion base pairs The team at IGIB generated over 51 gigabases of data using next generation sequencing technology, resulting in over 13x coverage of the human genome. This next generation sequencing technology used in this case enables massively parallel sequencing of millions of genomic fragments of 76 base pairs which are then mapped back to the reference genome. This humongous exercise was made possible with the CSIR supercomputing facility at IGIB.


Sequencing of a human genome requires high computational capability and technological know-how in handling sophisticated machines and analyzing huge volume of data. The first human genome sequencing initiative was conceived as early as 1984. In addition to the US, the international human genome project consortium comprised geneticists from UK, France, Germany, Japan and China. This project formally started in 1980 and sequencing was completed in 2003. India then could not be a part of the process due to lack of resources. Currently more than 14 human genomes sequences from different countries have been announced globally. With the completion of its first human genome sequence, India is now in the league with few select countries like the US, UK, China, Canada and South Korea.
Posted by jayasree at 3:19 PM