On 12-01-2023, the DMK Government moved a resolution to revive the Setu Samudram Canal Project (see the report below). Following this I was invited by the Dinamalar Video Channel to express my views on the feasibility of the project. In my interview to Ms. Shyamala of Dinamalar, I shared my views on

# the historicity of the site

# non-feasibility of the canal project from different perspectives, including those of the fishermen

# 'Setu Sentiment' and many more.

Tamil Nadu Chief Minister MK Stalin on Thursday moved a resolution to revive the Sethu Samudhra Canal project and will seek the Centre's support in implementing the project. The Sethu Samudhra Canal project is seen as an ambitious project by the ruling DMK government as it would create a shipping route between India and Sri Lanka. The ambitious project proposes to link the Palk Bay and the Gulf of Mannar between India and Sri Lanka by creating a shipping canal. The resolution was passed unanimously.

"Due to political reasons, BJP opposed Sethusamudram Project. Former CM of TN, Jayalalitha was in favour of this project but suddenly changed her stand & filed a case against it," the CM said while moving the resolution.

But the project has faced stiff opposition from pro-Hindu groups fearing that it may damage Ram Setu bridge, which connects Rameswaram to the Mannar island of Sri Lanka.

M K Stalin batted for reviving the project for economic prosperity of the nation and enhancing the freight handling capacity of Indian ports.

The project, which was started on July 2, 2005 at an estimated cost of Rs 2,500 crore, came to a standstill after protests by environmentalists and Hindu activists against the demolition of the Ram Setu, a symbol of heritage. The DMK had, in the run-up to the 2021 Assembly election, promised to complete the project when it comes to power to bring economic benefits to the state

The Sethu Samudhra Canal project is essential to strengthen the economic development of Tamil Nadu and India. The project was originally conceived in the year 1860 by Commander Taylor at a cost of Rs 50 lakh. The project had been studied for years and was designed by various technical experts like Dr Ramasamy Mudaliar from Tamil Nadu in the year 1954.

During the Union Cabinet meeting held during 1964 and the high level committee under the chairmanship of Dr Nagendra Singh, ICS in 1964. Various alignments were evaluated and project reports were prepared to implement the scheme without being detrimental to the environment.

During the regime of the National Democratic Alliance (NDA) government, the then Prime Minister Atal Bihari Vajpayee had given permission to conduct the feasibility study of the project. The project was sanctioned in 2004 when the UPA government was in power.

Posted by Jayasree Saranathan at 6:42 PM No comments:

I am glad to announce the release of my book. “Mahabharata 3136 BCE: Validation of the Traditional Date” on the occasion of the completion o... 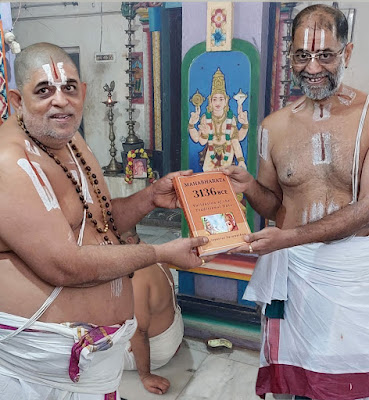