(3) Planetary:- (1) Stars appeared faint. Venus a prominent planet in the western sky looked dim. (2) All planets were in Southern declination.

There are two notable features with reference to celestial bodies.

(1)The southern movement of all planets is a notable feature of this year’s Garbottam. Last year this was not so. Planets in southern declination during Garbottam period is a deterrent for rainfall later.

The complete absence of any Garbottam feature indicates dryness during the 2nd fortnight of July 2017.

None except the presence of Venus and mercury in the western sky. But this is not a strong rainfall yoga.

(1) No closeness between Mercury and Venus. Throughout the fortnight, they are more than 60 degrees apart.

(2) Mars is in the lead till 29th July. On 29th Sun overtakes Mars in the star Pushya in watery sign. This might trigger some windy conditions at that time.

Posted by Jayasree Saranathan Ph.D at 10:51 PM No comments:

Day 2 of Garbottam 2016-17 (Good, but planetary combinations may spoil rainfall)

(1) Wind:- Cool breeze blowing from North east and East till noon
(2) Rain:- Nil.
(3) Lightening:- Nil.
(4) Thunder:- Nil.
(5) Clouds:- Cloudless during night. From morning onwards, white sheet of clouds were seen surging from east. By 8 AM bunches of them were visible with definite contours and were seen to cross the Sun. Cloud cover was seen throughout the eastern sky. They grew grey in colour as day progressed.
Between 8 and 8-30 AM bunches of clouds started crossing the Sun. 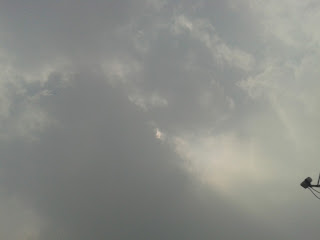 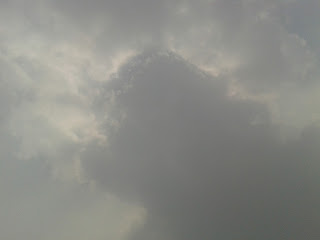 By 9-30 AM the sun light dimmed as sheets of clouds were hiding the Sun very often. 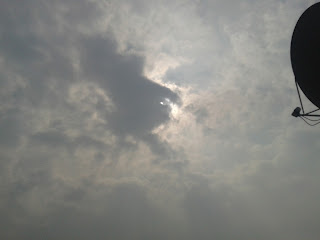 By 10 AM there was good coverage of the clouds that continued to hide the sun. This lasted till 12-45 PM. 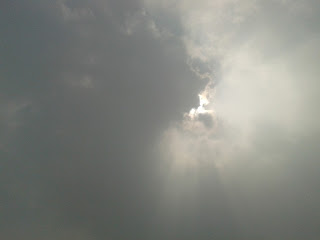 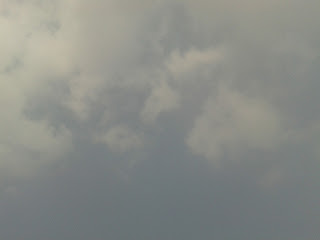 An important feature is that Moon was in Purvashada till 10 AM. When Moon entered Uttrashada, the thickness of the clouds increased and dark clouds were constantly hiding the sun.

One can say that this is a good Garbottam that lasted for quarter duration of a day equal to 3 to 4 days in the middle of the fortnight in the impact period. This day’s Garbottam is comparable to the 3rd Day Garbottam of 2015-16 season which did fetch rainfall on the impact dates in July 2016. However the sky was completely overcast at that time with more greyish tint.

But today (2nd day) the clouds surged as a white diffused sheet from the east and as they traveled towards west they crossed the Sun. By noon the clouds near the sun look scorched and distant ones seemed to drift in mal-formed aquatic shaped such as swan, fish and tortoises. 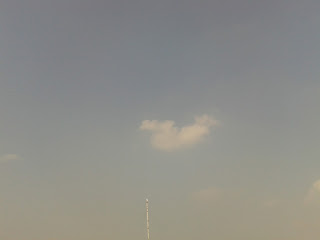 (2) Atmospheric :-  (1) gentle breeze was there till noon whenever the sun was hidden. (2) Sun was crossed by dark clouds often from 9-30 AM till noon. (3) Aquatic shaped clouds were very less but many huge bunches of clouds with bumpy back were seen, some of them changing into malformed aquatic shapes. (4) Wind direction was from the North and east.

(3) Planetary:- (1) Stars appeared faint. Venus a prominent planet in the western sky looked dim and surrounded with a halo. (2) All planets were in Southern declinations.

Two hours of the Garbottam roughly equals to one day in the rainfall impact period. As such the cloud and breeze seen today in the 3rd quarter of the Garbottam day could impact 3 to 4 days in the middle of the fortnight of 5th and 19th July 2017.  Probable dates are 10th, 11th, 12th and 13th July that could see moderate rainfall.

(1) There is no proper combination of planets to support rainfall in the impact period. Only one feature, namely location of Venus and Mercury in the western sky exists. But they are far away from each other at more than 45 degrees at that time. This does not support rainfall.

There are Rainfall spoiling features of this period.

(1) Mars is ahead of Sun and all the planets. Sun is too close behind Mars. This combination is supposed to scorch the land.

(3The gap between Mercury and Venus starts at 50 degrees in the beginning of the fortnight and comes down to 35 degrees at the end of the fortnight. This gap is too big to support rainfall.

Inference :- Between 10th and 13th July 2017, there exists a probability for moderate to heavy rainfall in my place of observation and in many parts of Chennai. However the presence of Sun behind Mars and Mars in front of all planets is a strong spoiler. Rain clouds may gather on these dates and fail to produce rainfall.

Posted by Jayasree Saranathan Ph.D at 10:39 PM No comments:

(1) Wind:- Cool breeze blowing from North east was felt at times till noon.
(2) Rain:- Nil.
(3) Lightening:- Nil.
(4) Thunder:- Nil.
(5) Clouds:- Cloudless during night. From 11 AM onwards clouds were growing from the east.
An important feature of the day is that Moon also joined Sun in Purvashada star from 11-18 AM onwards on 29th. Since Purvashada is connected with abundant rainfall, this transit of Moon gains importance.

Just after Moon entered Purvashada, one could see clouds coming from eastern direction and some of them crossing the Sun between 11-57 AM and 12- 30 PM. 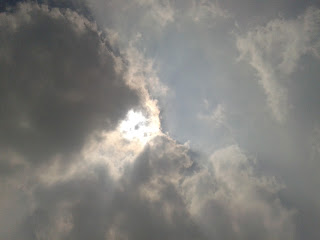 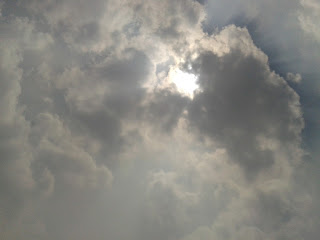 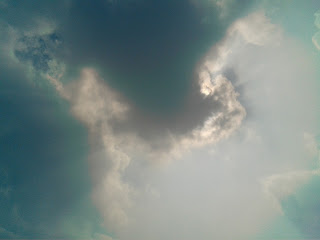 Before that between 10-37 AM and 11 AM, dark clouds crossed the sun while cool breeze was blowing form North east. 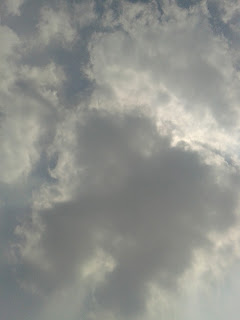 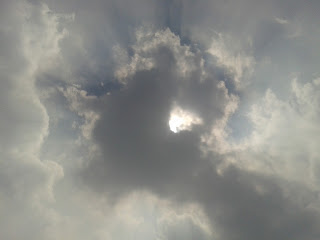 Apart from these two times, the sky was cloudless for most part from afternoon. Very feeble aquatic forms such as swan and stork were seen rarely in Northern and North eastern sky. 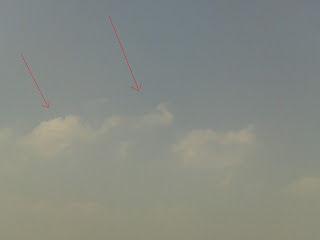 (2) Atmospheric :-  (1) gentle breeze was there in the morning. (2) Sun was crossed by dark clouds for duration of half an hour twice around noon. (3) Aquatic shaped clouds were very less and looked dissipated. (4) Wind direction was from the North.
(3) Planetary:- (1) Planets and stars appeared as whitish and faint discs. (2) All planets were in Southern declinations.

Two hours of the Garbottam roughly equals to one day in the rainfall impact period. As such the cloud and breeze seen today are negligible and could impact a day among one of the following, 28th, 29th and 30th June in Chennai.

Only one rainfall supporting feature exists during this period.

(1)Mercury starts combustion on 9th June and crosses Sun on 22nd June, 2017. Usually on combustion starting day it would rain. But Garbottam does not support rain on that date. There is no Garbottam support for 22nd June also.

There are 3 Rainfall spoiling features of this period.

(1) Mars is ahead of Sun and all the planets.
(2)Venus comes in opposition to Saturn between June 29th and July 26th 2017
(3) Mercury enters Sowmya Nadi that gives more winds and less rains between June 21 and June 27.

Inference: As the 3 days of probability (28, 29 and 30) almost come within the spoiling dates, any formation of rain clouds on these days could dissipate or give only traces of rainfall.

Posted by Jayasree Saranathan Ph.D at 11:30 PM No comments:

“Garbottam” means ‘Fetus formation’ or ‘nature of pregnancy’. This is also known as ‘pregnancy of clouds’. This is observed on the month of Margazhi, soon after the rainfall of the previous season is over. At the time the Sun enters the star Pooradam (Purvashada) in then sign of Sagittarius in Margazhi, it is said that the conditions for the next season’s rainfall start taking shape. This goes on for 13 days when the Sun will be crossing the star Pooradam. This period is known as Garbottam period or pregnancy period. One can find the beginning and end of this period mentioned in the almanacs (Panchangam).

The duration of each star is 13 degree- 20 minutes. Sun travels approximately 1 degree in a day. Each degree of Sun’s transit in Purvashada star is related to the entire duration of a star that Sun travels starting from Arudra star in the month of June. This is approximately equal to a fortnight. As per rainfall prediction techniques of astrology, observation of 5 meteorological factors on the days of Sun’s transit in Purvashada would give clues on the rainfall prospects for each fortnight starting from the time Sun travels in Arudra in the 2nd half of June.

One important feature of this is that it is applicable to the observer’s location. The presence of good Garbottam on a day coupled with favourable planetary position on the days of rainfall would ensure good rainfall.  So it is necessary that the observer continues to be in his / her location for the 13 odd days of Sun’s transit in Purvashada to gauge the rainfall effect in his / her place from June to December.

This year’s Garbottam started on 28th December 2016 at 11 PM (yesterday night) and would end at 12-57 AM on the early morning of on 11th January 2017. The Garbottam of last year was found to be highly reliable. This year I would further refine it with planetary spoilers and supporters to gauge the effect. Each day’s observation and inference would be posted on the next day. In the current article, I am giving the basics of how and when to see Garbottam.

The following are to be checked:-m

{Note:- Points 2 and 3 must be present along with few other features of the above list for a good Garbottam.)

{In the present Margazhi Garbottam, these two features are not present.}

Moon in the following stars during Garbottam would give good rainfall in the corresponding period if the above 3-some features are good on that day.

Given below is a table of  Garbottam dates and the corresponding fortnight later that is likely to bear the impact of the Garbottam. The Stars transited by Moon that are capable of giving good rainfall later are highlighted.

This year’s Garbottam has a clean-slate-like transit for Moon and Sun. There is no planetary war like last year. However all the planets are in southern declination during this period which is a cause of concern. A good feature is Moon would be transiting in 6 stars of good rainfall support. If only there is good Garbottam happening on these days, the impact would be very good. But that is subject to planetary support. In the day to day Garbottam article that will be posted from tomorrow, the supporting and spoiling planetary features on impact day would be written to judge the final outcome.