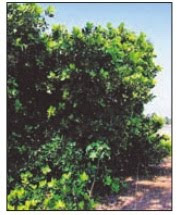 The traditional trees of , particularly those connected with stars and planets seem to have a wider range benefits to humanity. Recently the worth of a tree called Punnai or Puarasai in Tamil and known as Punnaga or Naga champa or Purasakeshara in Sanskrit came to be known as providing a viable auto fuel. The oil extracted from the seeds of this tree is found to be a good alternative for diesel. It is found to be economical and eco-friendly also.

This tree is widely seen in many parts of . This is one of the 50 plus trees that Varahamihira mentions as growing naturally near under-ground water veins. That is, if you find a Punnai tree (Calophyllum inophyllum) growing in a place, there will be water flowing underneath that place. A well dug near the tree will fetch water near the surface itself. There will be plenty of water in such a well and will be sweet and suitable for drinking.

There was a practice in olden days that when the Puunai was not blooming in time, the womenfolk used to dance around it and kick the ground near the tree. A few days after this the tree would start blooming. (Agrawala, Ancient Indian Folk cults, 1970, Varanasi) This practice seems to be a way to disturb or re-kindle the hardened ground under the tree so that the roots could penetrate further down to reach the water that could have gone below due to dry conditions. But water is anyway available under this tree.

In Puranauru (24 & 386), Aga nanuru (10) and Kurunthogai (5 ) this tree and its flowers are mentioned. The tree is praised for giving good shade and therefore a good place to relax. The birds called Kurugu used to sleep in this tree. The flowers contain sweet nectar and were worn by men as a garland. Lord Krishna is said to have given his sweet music on flute by standing under this tree only. 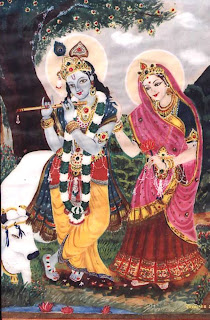 My favorite song in Tamil “Sengani vaayil oru” written by writer Kalki in Kilik-kaNNi style on ’s music has a description of standing under the Punnai tree on the banks of river Yamuna and playing his flute.

This tree is sacred for Naga or Adhisesha also. For propitiation of naaga dosha, this tree must be worshiped.

Each of the 27 stars of the zodiac in Vedic astrology is identified with a specific tree, animal, bird etc. These are given in almanacs and one can browse the net also to get their names. The rationale of the combination is that the star and the corresponding animal, bird and tree and the person born in that star share the same essence of the star components in all respects. Suppose a person born in a particular star has illness, he has to strengthen the star for regaining his vigor. This is done by growing or taking care of the corresponding tree or animal or bird.

Even if not ill, it is better that one takes care of the corresponding flora and fauna of his birth star.

In the case of pariharas also we go by the star in which the afflicted planet is posited. That star’s tree / animal / bird must be fed and grown well to ward off the defect shown by the star.

This tree is identified for the star Aslesha. Those born in Aslesha must grow Punnai tree or donate or plant Punnai saplings as much as possible.

Punnai is the sthala vruksha of Lord Muruga. It is the stahla vruksha in many temples. The sthala vrukshas are the ones that must never be destroyed. They bestow lot of goodness to humanity and the environment. Probably to protect them only, our Rishis had ear marked them as sthala vrukshas. It is good to know that one such tree is capable of helping humanity in its modern day needs.

This tree can be grown in home gardens also. Varahamihira says so. Before closing this article, let me give a few tips on the ideal days for planting or sowing as given by Varahamihira.

“When the moon passes through any of the Fixed asterisms ( Rohini, U.Phalguni, U.Shada and U. Bhadrapada) or the soft asterisms (Mrigasirsha, Chitra, Anuradha and Revathy) or through the asterisms of Moola, Vishaka, Pushya, Shravana, Ashwini, and Hastha, trees shall be planted or seeds grown according to the views of sages possessed of the Inner eye of Knowledge “ ( Brihad Samhita 55-31) 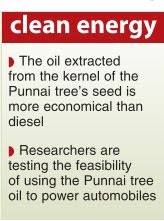 Aug. 15: The hike in fuel prices has not affected C. Rajasekharan of Vedaranyam near Nagapattinam. The farmer has for the past five years been using oil from the Punnai tree (Calophyllum inophyllum) to power water pumps that irrigate 36 acres of agricultural and aqua farms.

He may not quite realise the implications of what he is on to but scientists describe the innovation as a potential breakthrough in the search for a green, renewable, non-fossil fuel. The oil, extracted from the kernel of the tree's seed, is more economical than diesel and researchers are now testing the feasibility of using it to power automobiles.

Interestingly, at least one major corporate group is looking at the possibility of using Punnai oil as an alternative fuel. "A Mumbai-based company is cultivating Punnai trees on 60 hectares of land in coastal Kakinada in Andhra Pradesh.

The firm plans to commence production in a major way once it is proved that the oil is eco-friendly," said Mohammed Raffi, a marine scientist at the centre for advanced studies in marine biology, Parangipettai.

"One litre of oil costs Rs 33 if you buy the seeds from the market," Mr Rajasekharan told DC. "But if you grow your own trees, it will cost just Rs 12 per litre."

"A certain amount of molasses has to be added while crushing the kernels to make the oil," Mr Rajasekharan noted, adding that the fuel produced less emission than diesel. He has two dozen Punnai trees in his farm and buys additional seeds from the market that he uses to make his bio-fuel.

The Tamil Nadu State Council For Science and Technology has initiated steps to confirm the efficacy of punnai oil as an alternate fuel. "We will study the environmental impact of the oil and patent it if we find that it can be used as a substitute for diesel or petrol," said S. Vincent, member secretary.

Plant scientist at CPR Environmental Foundation, M. Amrithalingam, noted that Punnai was the official tree of Srirangam Temple and Kapaleeshwarar Temple in Mylapore. "Punnai oil was once popular as an insecticide," he added. A. Gopalakrishnan, a scientist at CASMB, described Punnai, also known as sthal vriksha, as the "eternal tree". "Every part of the tree can be used for some purpose. It is used to make furniture, catamarans and boats. Its timber is light but quite strong," he said.

On the many uses of Punnai and other sthala vrukshas:-

nice posts..i am too intrest to do miny projects towards this topic ..help or guide me further ..

I am so thank ful for a wonderful information ..i wish to plant at least 12 trees in my farms where i have planted Pongamia and Mahua and Now Punnai...
iam searching for seeds also
my best regards to this author
with best regards
S.A.Alagarsamy
MGR BIOFUELS
Chennai-37
9884016142
alagarsamy@gmail.com

can we get these seeds or oil in chennai