Scientific proof of Water as carrier of mantras!

Water is the main source of life.

in the universe to identify life.

the contact with water for starting any act (sankalpa and achamanam),

the mantra-purified water to remove all negativities,

and water to render all auspiciousness –

water is the purifier, carrier and transporter of whatever is desired.

It will be interesting note that this supreme characteristic of water

has been scientifically demonstrated by the

on the role of water in Pithru tarpaN

His experiments can be read at

His book “The Hidden Messages in Water” is now on sales.

Excerpts of it can be read at this link.

The vedic rituals are not without meaning.

and water dutifully conveys them for the purpose intended by the mantras.

The most common mantra AUM which permeates the cosmos

(the Om-kaar is said to be the sound of the cosmos of the moving particles.

This is indicated by the Drum / Udukkai of the Cosmic Shiva

in His non-stop dance in the cosmos indicating the non-stop movement of particles.)

creates a certain and beautiful pattern of some harmony in water

which the human mind is yet to understand.

Here are some interesting revelations from his research on water-

on how water ‘reads’ and picks up messages from around itself.

The sacred syllable "AUM" was written on a glass of water

and the crystal structure that was observed is shown below:

Water crystal obtained by labeling with the Vedic sound Aum

Purity of water influences the crystalline shape of water crystals.

In later experiments with water crystals,

found that the beauty of the water crystals is based on the purity of water.

See the pictures below which show how water reacts to impurities.

The picture below is a beautiful water crystal from an unpolluted mountain source.

formed from Water with no impurities

Water from a polluted river gives the distorted crystal structure as shown below.

Influence of sound on water

Dr. Masaru Emoto also found that the crystals are influenced by sound.

He placed glass vials filled with water between speakers and

and observed the crystal structure.

The two pictures below show the effect of soothing Mozart's music

in contrast to metal music.

See the pictures below to view the difference in "Request" vs. "order" 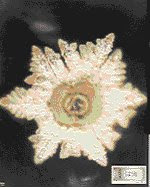 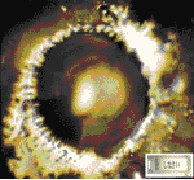 Words with positive vibrations like "Wisdom" in contrast to negative words

Water with the word "Wisdom" 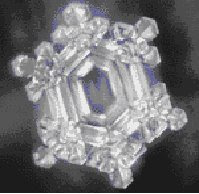 Water with the word "Fool"

The Hidden Messages in Water –

Can the solution to the world's problems be as simple as realizing that water has the ability to copy, memorize and transmit information? And, because humans are 70% water, this knowledge translates to the elevation of human consciousness?

Japanese researcher Masaru Emoto believes the answer is a resounding yes. Emoto's pioneering research on the effects of thought, words, and music on water has come to the forefront since his photo of waters crystals have been featured in the popular indie movie What The Bleep Do We Know?!. Many of these photos, as well as the foundations of his research, are featured in Emoto's fascinating book The Hidden Messages In Water.

According to the healing principle of homeopathy, like cures like. So to cure lead poisoning, a minute amount of lead would be included in water to "cancel out" this poisoning. The interesting thing, however, is that despite all traces of lead being removed from the water--entirely undetected by physical means--healing would still occur. Emoto realized that water "memorizes" substances and essentially copies the information. This realization changed his life.

Emoto began to wonder: Is it possible to find physical evidence of the ability of water to memorize information? Might there be some way of seeing it with the physical eye? In The Hidden Messages in Water, Emoto enthusiasm is palpable as he shares his discovery of how to freeze water crystals and photograph them. Since no two snow crystals are alike, he concluded, then perhaps he could capture the "memory" of water on film.

The results astounded him, and are now astounding the world. Emoto exposed water to music like Beethoven's Pastoral Symphony and Mozart's 40th Symphony and the results were well-formed crystals that were delicate, beautiful, elegant, and distinct in characteristic. In contrast, when he exposed water to violent heavy metal music, this resulted in fragmented and deformed crystals.

But the experimentation didn't stop with water. Emoto thought about what would happen if phrases were written on pieces of paper and then wrapped around bottles of water with the words facing in--words such as "Thank you" and "Fool". It didn't seem logical for water to "read" the writing, understand the meaning, and change its form accordingly. Yet, he already knew from his experimentation with music that strange things could happen.

The lesson from these experiments is that words have power; positive words affect the word accordingly, as does the vibration of negative words and their power to destroy. Because humans are 70% water, how much more do words affect us as humans...as well as the planet which is mostly water?

There are 32 color pages in The Hidden Messages in Water, featuring dozens of photographs of water crystals subjected to different songs, words, and stimuli. For example, Elvis Presley's Heartbreak Hotel showed a crystal divided into two parts, almost as if mimicking the song. Appliances that emit electromagnetic frequency, like computers, microwaves, and television, produced incomplete crystals. However, when the same water was subjected to the words love and gratitude, complete crystals were formed--as if those words "healed" the water.

Through his research, Emoto has found that the phrase love and gratitude produces the most beautiful crystal. While "love" and "gratitude" form beautiful crystals separately, the word gratitude seems to be doubly powerful. Water is H2O, and Emoto surmises that it's gratitude that's been missing in the human equation. He goes so far to say: "Love and gratitude" are the words that must serve as the guide for the world....We msut begin by learning what it means to have enough...If you open your eyes, you will see that the world is full of so much that deserves your gratitude."

Perhaps the most compelling story in this book, at least for me, was when a family experimented with rice. They put rice in three jars, and every day for a month, they said "Thank you" to the first jar, "You fool" to the second jar, and completely ignored the third jar. After a month, the rice that was told "Thank you" started to ferment, with a mellow smell like that of malt. The second jar that was exposed to the words "You fool" rotted and turned black. Interestingly, though, the jar that was ignored rotted before the rice that was exposed to "You fool".

"It seems that being ridiculed is actually not as damaging as being ignored. To give your positive or negative attention to something is a way of giving energy. The most damaging form of behavior is withholding your attention."

Emoto's wonderment and excitement is so evident in this book. I was captivated by his first-hand stories such as the one where 350 people gathered around a clouded lake in to pray for world peace--and how the clouded water began to clear up in front of their eyes. I was also intrigued as Emoto discussed the research of other scientists such as Dr. Sheldrake, who has done pioneering studies on morphic fields and morphic resonance and how this theory explains synchronicity, group consciousness (collective memory), archetypal patterns, and even the similarities among the features of family members.

I highly recommend The Hidden Messages In Water. Emoto's compelling research speaks a crystal-clear message that has long been taught by sages and mystics: our thoughts and words are powerful, one person can change the world, and love and gratitude is the cure for a polluted consciousness.

In the beginning there was only the Creator. From him the 'water' was
formed; from the water heated, the 'foam' was formed.

* Krishna Yajurveda (I.2.2)
Water verily is arka. What was there as froth of water hardened and it
becam * Mahabharatha

Water was formed from the space; from water, fire and wind, and from
their reaction the earth was formed (Shanti parva, 180.16)

The water produced in the sky by fire and wind attains solid state
owing to the reaction of fire and wind. The oily quality of the water
produced from the sky takes the form of the earth. (shantiparva, 180.15)

Thank you for sharing the informative blog. It is indeed wonderful to read and useful. Read hanuman chalisa.

Jai sree Ram.hanuman chalisa Is most Powerful Mantra. Its gives you the power and strength when you are in trouble.

/His experiments can be read at

http://www.sakthifoundation.org/Water_Healing.htm// seems to be invalid link.

Sakthi foundation is a credible one. They might have changed or modified the web site name. Please check the article at the end by Masaru Emoto at janetboyer.com. In that website you will see a number of links to Emoto's experiments and findings.