Mr Karunnaidhi at his favourite pastime once again.

and the sacred thread,

-as usual in the mis-placed context of caste conflicts and

What is caste and what is religion?

Are they same as he means in his poem?

How many sacred-thread wearing persons

were responsible for the caste conflicts in ?

How could Tilak remove caste conflicts?

Does he mean to say the numerous kings 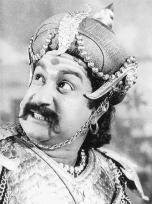 Whom he mentions for wearing tilak?

Does he want them to remove it?

In sangam period even elephants and horses were given tilak on their forehead.

In what way that caused caste conflicts or inequality?

How this holy land came to have many religions?

When did these come to this land?

Can such religions be the same?

Can removal of Thilak or sacred thread bring about equality among religions?

We know the answers for all these questions.

But he will write and spread mis-information tinged with hate-brahmin agenda.

So another exercise adding a new leaf to his already heavy baggage of ‘Rule by hate.’

The more he speaks like this, the better for the country going to polls shortly.

Flaying yet another time the Hindu practice of smearing ash or saffron or sporting a ‘tilak’ on the forehead, chief minister M.Karunanidhi on Wednesday questioned the need for “such things in a country which preached equality of all religions.” He also questioned the rationale behind Brahmins wearing the sacred thread.

“What is the need for these things in a country that has accepted all religions and preached equality of the same,” he asked in a poem penned by him in the wake of caste-related violence in Madurai on Tuesday in which one person died in police firing.

The DMK chief had on earlier occasions also ridiculed the practice of smearing ash or saffron on the forehead.

He had made similar remarks about certain other Hindu customs and even described Hindus as “robbers”. But later he clarified that he meant Hindus were robbers “who stole hearts”.

In the height of the Sethusamudram controversy, he had described Lord Ram as a “drunk ard” and wondered whether he was a qualified engineer to have built the Ramasethu.

In the present poem, Karunanidhi described truth as God, adding that all people were equal before God and described as “ignorance” those who were not aware of it.

“Caste differences are the offshoot of the branches called differences based on religion... lets chop off not only the branches but also uproot the tree to witness the emergence of a beautiful concept called equality,” he said.

He also described as useless the face-off between believers and non-believers on the concept of God and said there was no point fighting over which faith was supreme.

One of the responses:-

, , says: So Hindus should not sport tilak, or wear sacred thread, or smear ash on their foreheads because we a secular country. Does Karunanidhi have enough "nuts" to suggest that Christians stop wearing a cross over their hearts, Sikhs stop wearing turbans, and Muslim women stop wearing Burkha as well? Secularity goes both ways, you know.

Kindly read my blog on the subject of promoting spiritual values in India:

Thanks for visiting this blog. I will read yours..

You know I'm tired of Karunanidhi, his family and the men who bow to him. I'm just startled that there aren't many hate clubs/ forums dedicated to this "TAMIL HERO". His cause to support Tamils in Sri Lanka (and thereby the LTTE) is outrageous - many of his likes have already threatened the centre that TN could disintegrate into a separate Tamil nation. First ask him to support the tamils in Tamil Nadu. I mean if he really supports the Lankan Tamils so much - please why doesn't he go to Sri Lanka!!! TAMILIANS in Tamil Nadu ARE PART OF INDIA! NOone can tear them apart. He's very intelligently using his channels and his relationship with Tamil actors to influence public opinion! And the whole country knows how the locals of TN, the impoverished, the illiterate, the helpless throng the movie theatres to watch their fave "Thalaivars". ... God save TN please

No one speaks against this man. It is because of the fear of him. Simple thing, even every post of mine criticizing him receives some hate stuff as comment which I choose to ignore.

Another thing.
When the rest of India is seething with anger against terrorism and terrorist attacks, and the Union govt is asking for extradition of wanted terrorists in Pakistan, here is our CM impervious about all this and asking for stoppage of war against the most wanted terrorist organization that killed our former PM. And Sonia is dancing to every demand of him. Latest news is that she is sending Pranab to Srilanka to ask for this. Does Sonia have blood running in her body or what else?? An average citizen like me am not able to ignore what happened to Rajiv. Sonia and her daughter may be magnanimous enough to pardon the one who did them wrong. But when that wrong is of larger dimension as about a country, their personal decisions can not come into the picture. LTTE can not be let off for what it did to this country's sovereignty and to the numerous other people who were killed along with Rajiv. Sonia and Karunanidhi owe an answer to the Indian public. They may get along well now. But 'Kaal' (destiny) will give them a fitting reply for the damage they are doing to the country.