The date of birth of the 11th century Vaishnaivite saint Ramanujacharya was deciphered thanks to the two-year research of IIT-Madras professor G. Rangarajan.

Using the first biographical account of the philosopher from 13th Century Ramanujarya Divya Charitai and the ephemeris (astronomical tables) for 700 AD to 1700 AD of Swamikannu Pillai, Prof Rangarajan has arrived at April 13, 1017 as the date of birth. 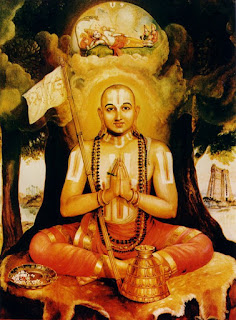 The professor is continuing his research on the saint and has already got the support of Wikipedia in his efforts.

"The oldest biographical account of Ramanuja was authored by Pinpu Azhagiya Jeeyar in the 13th century. It says that his date of birth was in Chithirai month, Sukla Patcham, Panchami Thithi, Thiruvathirai Nakshatram and Karkada Laknam. While every scholar argued over the saint's actual year of birth, no one ever bothered to find the corresponding date in the Gregorian calendar," said the professor.

The ephemeris for 1,000 years (700 AD to 1700 AD) with corresponding Tamil years prepared by Swamikannu Pillai was useful for ascertaining the date of birth of the theologian of Vaishnava school of Hinduism.

"This process of dating was accepted by historians such as K.A. Neelakanta Sastri and Vaiyapuri Pillai.

The 1,000-years ephemeral calendar was so accurate that it was used by Department of Archaeology to date inscriptions," said a senior official from archaeology department. The professor has submitted his findings to Wikipedia so that people can take it further from there. Wikipedia uploaded it few days ago after perusal of the corroboratory evidence. For the first time in history, we have an English birth date for Ramanujacharya.

The two-year research by IIT-Madras professor G. Rangarajan had scientifically solved the controversy over the date of birth of the 11th century Vaishnaivite saint Ramanujacharya in December last year.

When DC carried the date as , it led to arguments among Vaishnavites and scholars. Using the first biographical account of the philosopher from 13th century Ramanujarya Divya Charitai and the ephemeris for 700 AD to 1700 AD of Swamikannu Pillai, he arrived at the year 1017.

While reading the entry in astronomical tables, there was a slip which led to such arguments. After deliberations with religious and archaeological scholars, his date of birth has been finalized as (Kali Era Pingala year 4118). “Now, there is nothing to contradict this finding,” said Dr Nagaswamy, former director of archaeology.

Free Online Tamil Calendar Comprehensive and authentic tamil daily calendar for 2009. Easy to search functionality provided, to find the date you wish to get the data. Find the Hindu, Muslim or Christian festivals and government holidays.