is proved scientifically to increase the brain activity.

The gentle pressure applied on the ear lobes in a particular fashion while a person moves his body up and down is associated with prayer for Ganesha for memory power.

The information given below explains it all.

This makes me find a scientific connection to ear piercing too.

The ear piecing ceremony is a ritual applicable to all Hindus, irrespective of varnas and gender.

This is known as ‘KarNa vedha’. 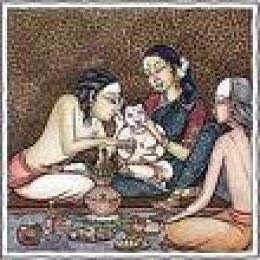 According Dharma sindhu, it must be done on the 10th, 12th or 16th day after birth of the child.

If it is not possible to do on these days, it must be done on 6th or 7th month after birth.

Even if this is not possible, it must be done on odd years and not on even years of the child.

At least by the time of upanayana, one must have this done.

The men must have the ear stud permanently after Upanayana (thread ceremony).

The continuous pressure in the ear lobe perhaps helps in keeping active that part of the brain responsible for memory.

I have read in a research analysis on the jewelery worn by Sita (both in Valmiki and Kamban) that piercing on side or top of the ear was not popular with women in those days. That practice was only found with tribals. But today it is a fashion statement!

On derivation of the term 'Thoppukkaranam" :-

Thoppukaranam, the traditional expression of devotion towards Lord Ganesha has now found a scientific interpretation. A research by scientists of the celebrated Yale University School of Medicine has found that holding the ears in devotion and doing the sit-ups improved brainpower. But western scientists have renamed the age-old Thoppukaranam as Super Brain Yoga.

“This is one of the many other devotional practices that have health benefits,” Prof BM Hegde, well known cardiologist, told Deccan Chronicle.He said that many such things termed ‘superstitions’ by rationalists were practiced diligently by westerners. 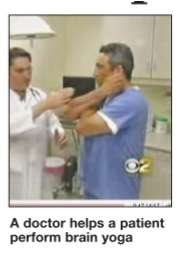 “SBY stimulates neuro pathways in the brain by activating the acupuncture points on the ear lobes.

According to Dr Ang, SBY pumps up cells and neuron activities in brain. Patients suffering from memory loss, Alzheimer’s disease and even kids showed improved results with SBY.

Raina Kotebra, an occupational therapist in , said that SBY helped a seven-year-old ward of her who was suffering from acute emotional disorder. Dr Eric Robins, a physician describes SBY as a fast, simple and drug-free method of improving brain energy.

Choa Kok Sui, in his book Miracles on Pranik Healing has explained how the SBY helps in strengthening brain.

“When the right ear lobe is gently squeezed with the left thumb and left index finger with the thumb outside, it produces the necessary energy connection. This connection causes the left brain and pituitary gland to become energized and activated. Similar is the case with the left ear lobe and right hand,” the master has written.

Dr Mahadeva Srinivasan, country’s top physicist and a DC reader, pointed out that the term SBY itself has been patented. “It is the high sounding jargon for the simple Thoppukaranamwhich every Tamil performs before the Ganesha. Let us rush to patent Thoppukaranam before some American doctor does find its extraordinary healing powers,” he said. The news about Thoppukaranam has become a rage, according to Dr Srinivasan. More details have been posted at Superbrainyoga.org.

“WHY didn’t you do your math correctly?" the teacher would ask the student and ask him or her to stand outside the class and do sit ups holding the ears as a punishment. The devotee who goes to the temple will also stand before the idol of Ganesha and do the same thing asking pardon for “sins.”

But Thoppukkaranam is no punishment. It is a system of acupressure that energises the brain and keeps the person who practices it, mentally alert and physically active.

Dr. M.N. Sankar, an acupuncture specialist was at the International Auricular Therapy Convention at in in 1999. At a discussion on the pressure points in the ear, he did the Thoppukaranam and the audience followed after him. “Splendid, the organiser said and asked who taught you this. It is in our lifestyle where we do this to pray to god or give punishments, I replied and there was a resounding applause from the audience,” the Doctor narrates, pointing out that Thoppukaranam has now been included in the chapter on auricular therapy.

He explains that crisscrossing the hands to knock gently on the temples is a means of activating the right brain and the left brain and energising the pineal and pituitary glands – the master glands of the body. This leads to mental alertness and physical fitness at one go.

The credit of giving a new meaning to this ancient practice goes to the late Pranic Healer from Phillipines, Master Choa Kok Sui. He evolved it as a system of Super Brain Yoga which is now taught in schools at Chennai. Danie Gagne, leader of the Super Brain Yoga project for the Pranic Healing Home, Anna Nagar, has been taking this to schools. It began with the DAV Matriculation and in Mogappair where it was done between October and November 2006. It was initially done for the students who were below average, but with the improvement that was seen, it was taken to all students of classes X and XII. She is presently conducting the programme for the , Mogappair and will do a follow-up for six months. 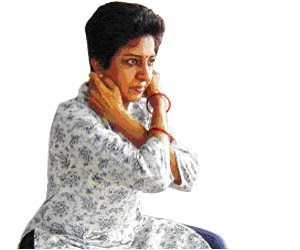 Recently a demonstration was conducted at the Bhavan’s Rajaji Vidyashram. A demonstration was done for the teachers at the and soon it will be taken to Chinmaya Vidyalaya and this year. The project is also on at the Sankalp Open School Learning Centre, Anna Nagar.

Danie says that wherever the students take this up, they feel so relaxed and are able to approach their examinations with confidence rather than fear.

The Pranic Healing Home, Anna Nagar is available for guidance to schools and parents who want to help their children with Super Brain Yoga:

Posted by Dr Jayasree Saranathan at 10:36 AM