Origin of the word “Thoppukkaranam”.

The term ‘ThoppukkaraNam’ (தோப்புக்கரணம்) seems odd with a mix of Tamil and Sanskrit.

Karanam is a Sanskrit term for ear.

It is not a Sanskrit word, nor a Tamil word bearing some connection to ear or the act of Thoppukkaranam.

This made me to look into the probable ways in which this term could have come into usage.

The word ‘thOppu’ looks irrelevant here. It has no connection to ear or hearing or the act of thoppukkaranam.

We can also think of Thoppu, thoppi etc, but they can not be interpreted with the above meanings as there is no authentication from Tamil texts or Tamil lexicon.

When I was searching through the dictionaries and Nigandu, I came across a term ‘thodu’ (தொடு) meaning ‘thOdu’ (தோடு) – the ear stud!

‘Thodu’ is an ornament worn in the ears and sounds similar to ‘தொடி’ (bangle) worn in the hands.

The ear stud is known as ‘thOdu’ because it is worn by making a thuLai (துளை) in the ear.

The exact place where the piercing is made is the bottom of the ear lobe that we hold for doing thoppukkaranam.

ThOdu is considered to an auspicious ornament worn in the ear. 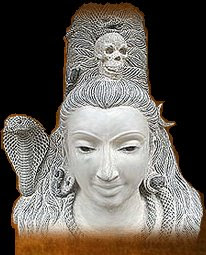 Speaking on what constitutes auspiciousness, Pramacharyal of Kanchi once quoted this expression that even Shiva was seen all the time with the thOdu.

Therefore thOdu should not be removed at any time.

The only time womenfolk remove it is when they take oil bath. But soon after oil bath, they have to wear it.

It is important like the kumkum and mangal sutra that can not be removed.

This ornament is a curved one clinging to the ear. 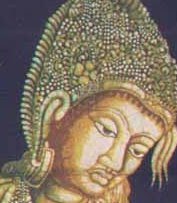 The part of the ear where it is worn is a ‘தொகுதி ’ or a place having some group of internal energy flows (nadi).

Here the thOdu is interpreted as “thoguthi” or group.

The thOdu was worn by all men and women in those days.

The ear piercing was one of the samskaaras done to both boys and girls soon after birth.

The thodu that is worn must be something that gently pulls the ear.. 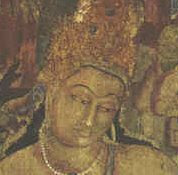 show elongated ear lobes – made so by wearing ear ornaments. 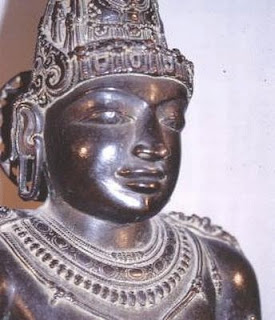 The ear lobe is pulled by the ornaments.

This is similar to the pulling done manually in ThOppukkaranam.

the part of the ear where the thOdu is worn or

தோட்டுக்கரணம் could mean holding that part of the ear where the ear ornament or thOdu is worn.

This could have become

Good analysis! This makes the best sense of all the posts so far. This definitely makes way more sense than those who claim that it has something to do with the Arabic language word 'Tauba'.

Neither is Arabic older than Tamil or Sanskrit - not even by a long shot but also Thoppukkaranam is practiced almost only in South India - mainly in Tamil Nadu. This is more proof positive than even the roots of the word.

It is news to me that thoppukkaranam was linked to Arabic. The word is Tamil. 'Karna' (ear) of Sanskrit becomes 'Karanam' in Tamil. I only analyzed how it got a prefix 'thoppu'.

The phrase 'thoppukkaraNam', as far as I know, is derived from the Sanskrit phrase 'dorbiH karaNam'. While 'karaNam' refers to the ears, 'dorbiH' is probably from 'dorvahava' meaning 'the fore and upper arms'. In doing 'dorbiH karaNam', we hold our ears by the alternate forearms, crossing them under our chin.

There are at least two legends connected with 'dorbiH karaNam': one is ViShNu doing it before Ganesha to get his sudarshana chakra that the latter playfully put in his mouth; and the other is Gajamukaasura extracting this punishment from Indra every morning--check these links:

Madam,
These Westerners are at it again!! Please see this video to see how they go ga-ga about our own "thoppukaranam" carefully avoiding all references to our culture and traditions
http://www.youtube.com/watch?v=KSwhpF9iJSs

Let me reply in English for the benefit of other readers who are mostly non-Tamils. You say that it could have been 'Thappu karanam' - as a punishment for a mistake (thappu) done. Thappu could have become thoppu. But what is karanam? What is its meaning? How do you relate Karanam with Thappu? If Karanam is taken to mean karna - ear, is it 'wrong ear'? Is that implied by that punishment?

There is another meaning for Karanam. It means activity (both in Tamil and Sanskrit). Karanam is a common word in Tamil and Sanskrit. The word upakaranam, has karanam which means an apparatus to do some activity. If we take the meaning of karanam in Thoppukaranam, as an activity, then also it fits with the explanation I have given for Thoppu.

I also came across a word 'ThoppaNam' (தொப்பணம்) in Tamil dictionary to mean Thoppukaranam. Thoppu (தொப்பு) seems to be the word with which the action of pulling is done. Thoppi is the word for the flower bud of Areca tree (paakku tree). It looks like a curved ear lobe. Perhaps ear lobe was compared with this bud giving the name thoppi to ear (in Tamil). So it could have been Thoppi Karanam - an activity done to the ear!