Krishna connection to the dances of Tamilnadu. (World Tamil Conference -5)


There are 11 types of dances popular in Sangam times. Madhavi of Silappadhikaram was trained in all those types. It was in the context of her Dance - inauguration that we come across detailed information of these dances and music that existed in olden times.

Today think of indigenous dance forms of Tamilnadu, we are told that Karakattam, Poikkaal kudhirai aattam, Marakkaal aattam and Kootthu are some of the indigenous ones. The irony is that some of them are attributed to Krishna whose times preceded the Indus valley civilization for which Mr Karunanidhi has a special liking.


Of the 11 dances, Krishna had pioneered three. The karakaattam of today which is danced by balancing the pot in the head was originally done by Krishna in Tamil lands where Banasuran was ruling. Krishna's grandson Anirudh fell in love with Uzhai (Usha), the daughter of Banasura. He was imprisoned by Baanasura. In order to get him released stealthily, Krishna did the Kudakkootthu - danced on the streets of Baanasura by balancing pots on his head to divert the attention of the guards. This dance of Krishna has been immortalized in Aazhwar's pasurams and also by the dancers of those days. This form lives on even today as Karakaattam! 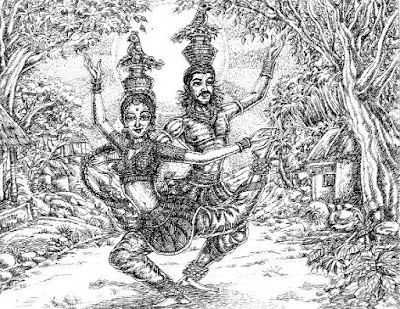 What would the Dravidian scholars say for this? Do they deny Krishna's existence? Can they say that this dance was inspired by tradition form the North (Mathura / Krishna cult)? Tamil texts clearly speak about this dance as being introduced by Krishna.


All the 11 dances were introduced by Gods and Goddesses. There is a sutra about these dances given by Adiyaarku nallaar in his commentary in Silappadhikaaram. Sekkizhar also is said to have refereed to this in Periya Puranam.

This was done to delude the enemy and secure the release of Aniruddhan.
This dance was first done by Krishna in Tamil areas where Baanaasura (the descendant of Maha Bali) ruled.

This is supposed to be Mahabalipuram - the original area now submerged. This place is mentioned as "Vaana Perur" in Silappadhikaram.
Underwater excavations have shown that there are traces of  submerged city off the coast of Mahabalipuram.
But the Karunanidhi government would not do anything to initiate research on this part because that would put at naught their Dravidian theories. That would establish connection with North, with Krishna and substantiate that people of the North and the South had mixed well in those times. If not so, how could the grandson of Krishna who could be expected to be living in Mathura or Dwaraka - in the north of the Vindhyas, come to south and fall in love with a girl in the a place called Vaanan Perur, miles into the sea from today's Mahabalipuram?


The last 3 were done by goddesses.
The 9th dance was Marakkaal dance. (மரக்கால்)
This was done by MaayavaL (மாயவள்  ). She is Durga.
In a bid to win over asuras, she fixed wooden legs to avoid the poisonous creatures on the ground.
She danced her way with those wooden legs and overpowered them

We can see that all the dances have been pioneered by Hindu gods and goddesses. The Tamil society had been a Hindu society. Krishna's impact has been very high among the Tamils.

The Kuravaik kootthu danced by cowherds in Mullai lands (refer Kalith thogai) was a popular dance form that existed in Mathura and done by Krishna.

The alliyam done by Krishna was same as Hallisaka of Gujarat.

These dances were done by Krishna and his friends in his boyhood days. Harivamsa has an account of Bala charitha where it is said that Krishna used to dance Hallisaka to enthuse others including the cattle.

The same reference is found in Silappadhikaram in Aachiyar kuravai where the girsl readied to do the dance from Bala charitha ( வால  சரிதம் ) . Details of Krishna connection can be read in my old article on Nappinnai ( http://www.tamilhindu.com/2009/12/who-is-nappinnai/) . This Alliyam or Hallisaka was done after Krishna over powered the elephant Kuvalayapeetam of Kamsa.


The scenes of Hallisaka can be seen replicated in the Aachiyar kuravai.
It goes in stages of Krishna winning a demon, winning Kaaliya and finally Kamsa. The Silappdhikaram songs also follow such sequence.


There are 2 ways of explaining how the Gujarati Hallisaka entered Tamil lands and became its own by a name "Alliyam" .


One is that the Tamils learnt it from Gujarat.
Another is that migrated  Dwarakans brought with them this dance and the existing cowherd population adapted them in course of time. But Madhari's dialogues in Silappadhikaaram sound as though the dance was owned by then right from the times of Balacharitham.


Krishna's visits to Tamillands is authenticated by the Kudakkootthu (karakaattam) and mention of his name as one who attended the 2nd sangam at Kapaatapuram. Krishna lived 5000 years ago. These dance forms and migration on account of submergence of Dwaraka must have happened 5000 years ago. There is a mention in Kaliththogai of Cowherd community that existed in submerged Kumari lands to have migrated northward along with the Pandyan king in the wake of submergence of Kumari.


These submergences have simultaneously happened or one after the other and brought migrated people from Dwaraka and from Kumari to the present day Tamilnadu lands. The identity of these dance forms with Tamillands show that the people have had same culture, same language (Tamil as spoken language) and coexisted with a same identity. These views must be researched and more inputs must be added. This view resets the Indian past history. Today only Tamil texts are capable of substantiating findings of such a research. Such a research is likely to make Tamil more ancient - playing an inevitable role in the culture of all Indians of those days. The first requirement to achieve this is to shed the Dravidian mind set and look from Tamil texts without bias.


The references to Krishna and Mahabharatha as  found in sangam texts is given below. (Courtesy :www.hinduismtoday.com )