After an unusual dormancy, the sunspots have become active at the moment. Beginning September 7th, some solar flares have been reported. Usually these flares erupt when the Sun passes through the signs of Mars and its own sign and in the stars denoting heat. The combinations have been previously analyzed in my post in


Will the earth black-out in 2013 - From NASA report to astrological report.

We will find that a similar combination is existing now also.
The sunspot activity is moving towards its peak now. Accidents, uncontrolled passions and human error are attributed to this activity. We have been witnessing such events for a few days now – particularly when solar flares are seen. 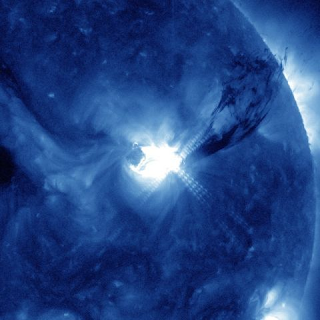 
Venus and Mars are in debility now. Venus is in between Sun and Saturn now. When Venus gets hemmed in between malefics we come across disasters from fire.

Moon is going to cross the vulnerable retrograde Jupiter in the next 3 days and cross Ketu in the 3 days after that. These 6 days are vulnerable for human sufferings at mundane level.
In the next 3 days, the terror attack combinations exist in good strength.
North India is vulnerable.
Let us pray nothing untoward happens.

An earthquake of 6.8 magnitude occurred in Sikkim (Gangtok) on 18-09-2011 at 6-10 PM
(in the second 3 days when Moon was transiting in Taurus).
This combination has earth quake potential. Browse for old articles on astrological factors for earthquakes in this blog)

The sun has continued its string of outbursts this week, unleashing two new, powerful solar flares in two days from a region on its surface that space

experts have now dubbed "Old Faithful."
An X-class solar flare — the most powerful type of sun storm — erupted Wednesday (Sept. 7) at 6:37 p.m. EDT (2237 GMT). Another flare blazed up today at 11:44 a.m. EDT (1544 GMT). The latter flare appears to be somewhat less intense, but scientists are still taking its measure.


These solar storms follow closely on the heels of two other big flares this week, one Monday (Sept. 5) and one Tuesday. All four storms erupted from the same area, known as sunspot 1283. Sunspots are temporary dark patches on the solar surface caused by intense magnetic activity. [Photos: Sunspots on Earth's Closest Star]

Because of its recent string of powerful flares, space weather experts at the National Oceanic and Atmospheric Administration dubbed sunspot 1283 "Old Faithful," comparing it to the well-known geyser in the United


Four straight days of strong solar storms
Strong solar flares are classified according to a three-tiered system: X-class flares are the most powerful, M-class are of medium strength and C-class are the weakest.


The eruptions on Monday, Tuesday and Wednesday all produced CMEs, scientists said, though it is too early to tell with today's storm. But the three known CMEs shouldn't cause major problems on Earth, they added.
"Not one of the CMEs, however, will hit our planet squarely," the space storm monitoring website Spaceweather.com wrote in an update today. "Glancing blows from the three clouds will commence sometime on Sept. 9th and continue through Sept. 11th, possibly sparking minor geomagnetic storms."
These CMEs could prove a boon for skywatchers, possibly producing extra-dramatic light displays (called auroras) in certain locations when they do collide with Earth.

The powerful storms of the last four days are part of a larger pattern. Solar activity has been ramping up over the last few months as the sun has roused itself from an extended quiescent phase in its 11-year activity cycle.
Just last month, for example, the sun let loose with an X6.9 solar flare, which was the most powerful solar storm since December 2006, NASA scientists said. The sun also generated an X-class flare in February and another in March.

And the storms should keep coming over the next few years. Scientists expect activity in the current cycle — known as Solar Cycle 24 — to peak around 2013.

Dear Madam:
I wish to submit 2 horoscopes for your perusal. Kindly let me know a)whether i can and b) where i can submit the same. Waiting for yr reply. I am a longtime reader of yr blog. Thanks

Dear anonymous,
Thanks for reading my blog regularly.

One clarification I want to make on astrological counseling.

Due to time and work constraints, I don't take up matching of horoscopes for marriage and giving general prediction on an horoscope. However if there is an issue in matching and some guidance is needed, I will look into them and give my opinion.

I do problem-solving - that is, I give astrological advise only when one is in a trouble or a problem / anticipates trouble and is in need of a guidance to handle it. I used to tell people that as you see a lawyer when in trouble or a doctor when you are sick, one must see an astrologer only when one feels a need to see. The urge to seek divine guidance for an issue that is troubling one must be there to get correct guidance through astrology. When such an inner urge is there, one can write to me in the comment section giving the e- mail ID. Such comments will not be published and I will directly write to their ID.

Please note only if there is an issue, I will consider those comments.

Otherwise any issue of common nature and which is for the good of all, I will answer them through this blog.

Dear Madam:
Thanks for yr response. Yes there is some guidance and advice that i need and yes its with regds to horoscope matching.Await yr positive reply. Regds