Why Modi refused to wear the Muslim Skull-cap – a very down-to-earth reason!!

Image make-over or image change-over – whatever you call it- the fact is that Modi was caught unawares when he was offered the skull cap by the Muslim clergy!
The reason is not what the English media is trying to invent and spread as a scoop, because it is as simple as what anyone with shining head will understand.
The news item in the Hindustan Times clearly says that he did not want to wear the cap in front of the cameras. It says,
“Seeing the cap, Modi's expression changed like a flash and he gestured that he would not prefer wearing the cap under the gaze of cameras.”
http://www.hindustantimes.com/Revealed-Why-Modi-refused-to-wear-Muslim-skull-cap/Article1-747517.aspx
When he did not have any qualms on wearing the turbans given by others in the glare of the cameras, what reason could be there for refusing the Muslim cap?
There is a reason. It is as common to you and me and to anyone standing in the glare of cameras.
To know what it is, take a look at the other headgears he wore. 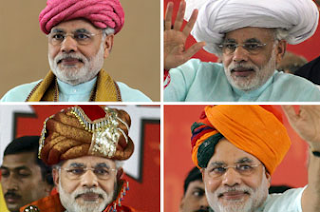 You can see how these headgears neatly preserve his well combed hair but not as much as he would have liked it to. That is why you got a chance to see how he managed to tame back his hairstyle.
Caught by Piyush Patel in his camera, you see in the next 4 photos how managed to keep up his precious “Image”. 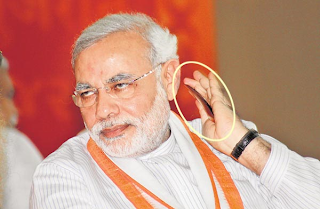 Ever wondered how Narendra Modi always maintains the perfect look on & off stage? With scores of cameras watching his every move at the kick-off ceremony of his 3-day fast at GU convention centre on Saturday morning, DNA lensman Piyush Patel captured on camera a small comb that Modi deftly held in his left hand to tidy his hair after removing a turban. 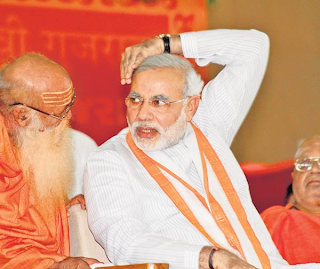 Now we know the purpose behind this gesture! 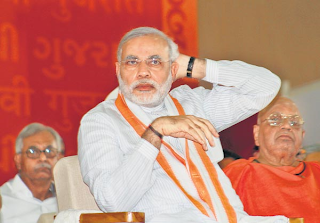 All the ruffled feathers are evened out! 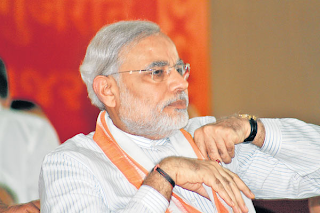 And the image makeover is complete! The comb slips back into its place

Picture Courtesy:-
http://www.dnaindia.com/india/slideshow_out-dna-discovers-secret-behind-narendra-modi-s-image-makeover_1588505-1#top
Imagine how he can do the same “Make-over” and not get noticed if he has to wear the Muslim Skull-cap!
A sample cap on how it grips the top of the head is shown below. 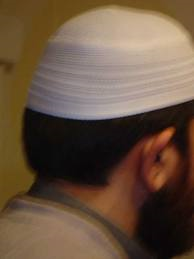 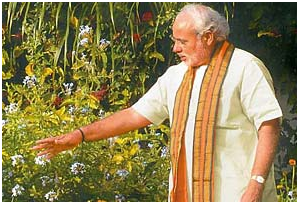 but having to do a “make over” to present a lush growth – that comes with little betrayals like in this photo below, (look at the top of his head which did not obey him in his "Make over" efforts) 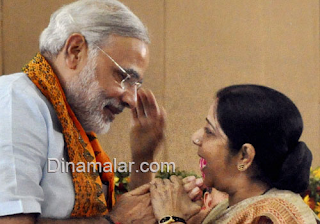 how can anyone blame him for refusing to wear the skull cap in front of the cameras?
With a skull cap on his head, Modi will be in a terrible “Image –loss”.
The secret that there is 'nothing' in his ‘head’ will be flashed across all the homes through the TV when he takes out the small but gripping skull cap.
Why should he risk it?
I think by now Modi would have conveyed his ‘dilemma’ to the Maulana.
Isn't it the turn of the Modi- baiters to cover their empty ‘heads' now?
Posted by jayasree at 6:56 PM

I am sorry. It is a terrible article. I feel Mr Modi did not want to wear the Islamic cap because, he did not want to portray himself as another Pseudo secularist. He wants to hold on to his Hindu identity, hence his refusal.

A young child artist was once asked why he left the top one foot of all his paintings blank. "It's simple; I can't reach that far"!, he said.
Simple explanations hit the nail on the head.
Also, Modi spends a lot on his appearance including his hair and clothes, so there you are. love reading your articles.

Let one Muslim come out openly and wear a Tilak on his forehead.
Modi might then wear the skull cap.

Modi's sun sign is Virgo. His lagna lord is Venus. So he will exude a physical charm and also be interested in enhancing his good looks. We usually see big people with awe. But internally they are very ordinary, very down to earth and very much average like us. Modu expressed in an old interview how he wishes to be the praised by the media. It is human nature to attract positive attention by all means.

Media is very unfair to Modi. The Media backed by Congress and Christian sources have every reason to see that Modi does not rise. Read mediacrooks.com articles - particularly the one in this link on how Burkha etal started a campaign against Modi.

In this age of access to internet, I appeal to Modi supporters to launch counter offensive through blogs and other means to expose the media bias against Modi, instead of just sending links to articles. I am doing my best in my way to undo the Modi-phobia. The above article is one such attempt.

I am really surprised to this post from you. It would be preposterous for anybody to believe or say that NaMo refused that skull cap for the reason that it may untidy his hair. He stands by his party ideology "Justice to all and appeasement to none".

NaMo is not one such politician who indulge in things like posing with cap/scarf or participating in ifthar or announcing Israel trip to one section etc. He had the conviction to ban Cow slaughter, conversion and that too, the ban prevails till date!

It is his firm belief in his principles that has won him millions of supporters. Needless to say that the same conviction has earned him the grudge of many. As one of his staunch supporters, I admire him for this principled life. This is the quality of any great leader.

Let us praise NaMo for what he is and not for what he is not. He doesn't need any cover up or image makeover which is only required for a third rate politician.

Do u have the HORROR-scope of P Cheatambaram? Just wanted to know when he will be imprisoned? Many of us are eager to see him behind the bars.

Surely Mr Chidambaram is in trouble. The authenticity of his horoscope that is available on net is doubtful. But he has a conjunction of malefics which would be pretty bad if his lagna is Scorpio. Looking at his palm imprints, his political career is going to come to an end.

Watch out for Pranab. He may be having some plans. At the moment he has good planetary combination than MMS, PC and Kapil Sibal in Congress. MMS's downfall has started. Will do a post on that.