While looking for some information on a place called Sakala, I chanced upon some Tamil names and olden Tamil practices in Ancient Estonia and in Sami people. Whatever I am going to write here from what I noticed, may only be peripheral and it needs deeper study to establish them as true.

“Sakala” is an old country that finds mention in Mahabharata. It was in the region of Aratta and could be reached from the Indian side after crossing rivers Sutlej and Ravi. But there was another “Sakala country” further north. Ancient Estonia was known as Sakala.

At the outset one may think that Sakala is a Sanskrit word meaning ‘whole’, ‘all’, ‘complete’ etc. But when looked at the names connected with this country, most of them sounded Tamil! 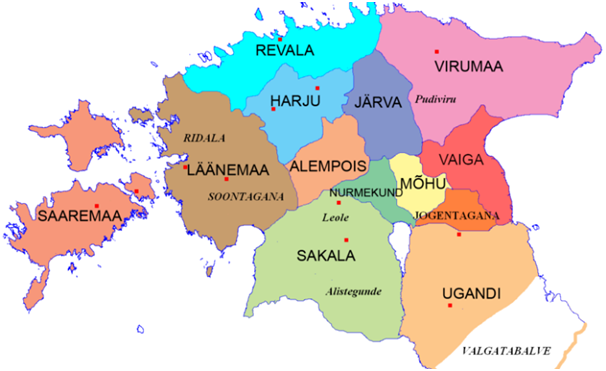 In the above map of Ancient Estonia of the 13th century, the name Vaiga is similar to river Vaigai in Tamilnadu. It is an ancient name in Tamil. Likewise Virumaa, Pudiviru, Mohu (Mohur is a place in Tamilnadu), Ugandi (ugappu or Ugandu is a Tamil word for happiness) and Sakala are familiar in Tamil.

This region had Kunda culture in very ancient times dating to 8500 – 5000 BC. Kunda is a word for pot both in Tamil and Sanskrit.

There was a Pulli settlement dated to around 11000 years ago. Pulli in Tamil means petal or the outer whorl of the flower. There is reference to Pullinam in Sangam texts. Pullinam refers to sheep variety in Tamil. A Tamil Sangam age verse makes a distinction between Pullinam and Nallinam referring to sheep and cattle respectively.

Pullis were settled on the banks of Parnu river – sounding like Parna meaning leaf in Tamil and Sanskrit. Pulli and Parna are parts of a plant in Tamil. Taking Pullinam as sheep, they too are connected with parna as they subsist on leaves.

Most Pulli regions end with ‘Maa’ in their name. There is a ‘Sindi’ also in this map! 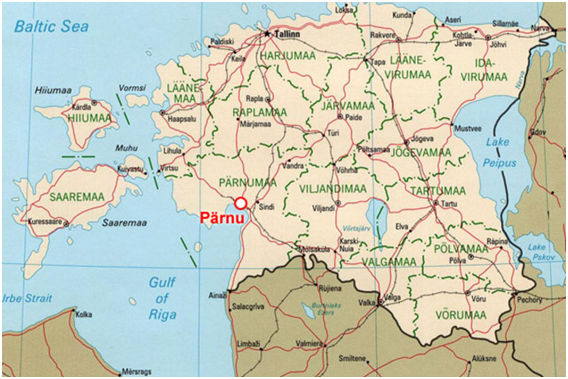 Looking at so many “Maa’s in this map, I wonder whether ‘Maa’ was used to denote some unit of measurement.

Maa also means flour in Tamil. The traditional food of Estonians is a Maa – flour of barley, rye, oat and pea. It was called as Kama 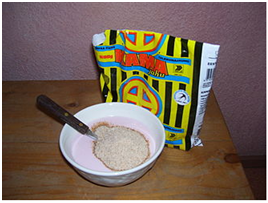 A bowl of Kama.

Kaama is a word in Sanskrit too which means love, desire etc. But in the context of a food, and flour in particular, the Tamil word Maa fits in well.

The names of places where archaeological excavations were done also sound as Tamil.
To name a few taken from this website

Names in Estonia - Similar ones in Tamil with meaning in bracket.

The archealogical finds from Estonia also has surprising connections with Tamil.
The following artefacts were recovered from Kumna near Kella. 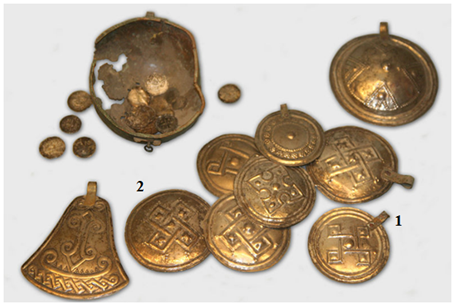 Kumna sounds like Tamil Kumana and Kella like kalla or kola. Kolla in Tamil is one who is engaged in smithy works.

The figure titled as 1 is a popular design called ‘Kolam’ and drawn with flour on the floor or ground in Tamilnadu. A complicated design of it is called Srivatsa, which is found in Indus symbols. But ask any rural Tamil woman, she would recognise it as ‘Kolam’ design that is drawn as a mark of sacredness on all days in front of the house, inside the house and in temples. 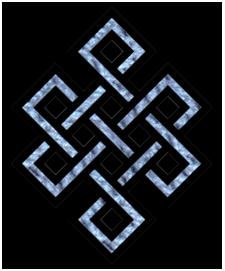 The above is Srivatsa.

The pictures below show Tamil woman making huge designs of Kolam on the streets. 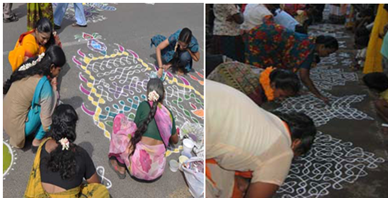 The image in the picture of artefacts numbered 2 is the basic design of ‘Kolam’ made on festival days.

It is developed further as seen in the picture below. 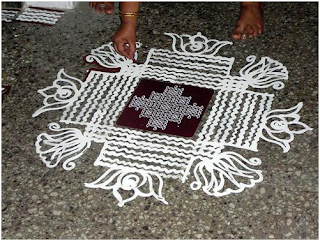 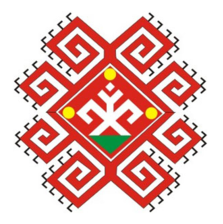 The people of Sami religion or Sami people lived in a place called “Kola” peninsula!

Kola Peninsula also has its bag of surprises for us in their names. It has a lake called “Imandra” (Indra?), has a river called ‘Niva’ and a Gulf called ‘Kandalaksha’. Kanda in Kandalaksha is Tamil word for Skanda.

Mavalla Koda is a religious organisation of Estonian natives. This name also sounds like corrupt form of Tamil. Even the very name Estonia is how Tamil words adopt ‘e’ before words starting with ‘s’.
Of all these, Sami people have many common features with Tamil.

First of all ‘Sami’ is Tamil word for God.
Sami people worship stone which resembles ‘linga’. 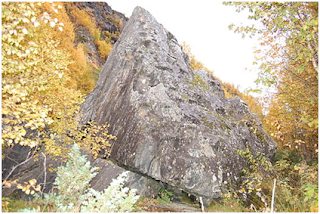 The above is Siedi, worshiped by Sami people.

These stones are picked up from nature (not carved) and consecrated on a higher level. Twigs and leaves are strewn on them as how Hindus do ‘archana’ with flowers on idols.

The names of female deities of Sami religion end with ‘akka’. Akka is a Tamil word for elder sister.
Maderakka was the first Akka and it refers to Mother of the tribe. Maata is mother in Tamil and in Sanskrit as well and Maderakka sounds like Tamil word for Mother figure called as Akka.

Shamanism is another feature that is common between early Tamils and Sami people. The use of drums and connect with ‘spirits’ is something extensively found in Tamil Sangam literature and which even continue today in rural Tamilnadu.

The belief in after life and ancestor worship is yet another common feature with Sami people. I came across a name ‘Maravah’ in one of the articles on these topics. Marava is the name of a people engaged in war and protection.

As if to crown all these is the name Sakala. Sakala was the olden name for Estonia, in Northern Europe. One may think that this is a Sanskrit word. But the location of Estonia makes me think that it refers to ‘Sakala’ or ‘Sakalai’, a Tamil word that refers to the husband of wife’s sister. And this location comes within the area from where Skanda’s wife came.

Skanda, also known as Muruga was a popular God of not only Tamils but many across India from very olden times. Even Rama was known to have worshiped him as known from the verse in Valmiki Ramayana (2-25-11 ) which says that his mother Kausalya told him that Lord Skanda would guard him on his way in exile. She mentioned Skanda’s name as the first one among the other names. 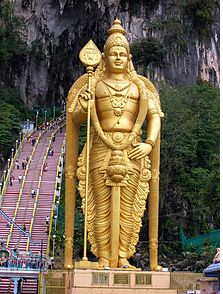 Skanda was not a myth but a real person who lived in very ancient Tamil lands which can be located near west or north Australia which are now under water. His name is synonymous with warrior-ship. Anyone engaged in deep contemplation of his prowess is bound to become capable of trouncing his enemies. (This contemplation is the basis of prayers for Gods in Hinduism).

Skanda’s wife was from some northern lands of the globe, known as Indra’s land or Deva’s land. In general terms, the northern hemisphere was known to belong to Devas and the southern hemisphere to Asuras. The sages, the narrators of information such as this, have always added some mythical and extraordinary elements so that they would last in memory and are passed on from generation to generation for a very long time. It is up to us to remove the mythical elements and derive the information contained within. As such we cannot deny the geographic connection to a land called Deva land or Indra loka on earth.

The fathers of each of the 5 Pandavas of Mahabharata were someone from outside Bharata varsha. Of them Arjuna was fathered by Indra himself. There are many references to a land of Indra with their capital at Amaravathy – a place situated on a hill from the description. Skanda from Deep South married a girl from Far North who happened to be the daughter of Indra. Her name was Devyaani or Devaanai as per Tamil texts.

Due to this marriage connection, an exchange of people or movement of people had happened from Deep South to Far Northern regions. The topography of these regions need to be studied to look for clues. But as of now the surprising similarity with Tamil in the names of this region and with Sami people is something that cannot be brushed aside. There is likelihood of the people of Skanda’s land having gone over to the land of his wife and settled there. In such an event, this place Sakala is a fitting one to refer to the region where the sister of Skanda’s wife had lived.
The sisters of Devyaani were Akka godessess. Kanda in Kandalaksha is another surprising link. Even the very name Sakala also recognised as Sagala reflects the use of 'ka'-'ga' for the same letter which happens only in Tamil. Sakalai is also pronounced as Sagalai in Tamil to refer to the husband of wife's sister. If this region was the maternal home of Skanda's wife, it also means that her sisters ( akka) lived there. Perhaps their husbands also came from the same region. This makes it the land of Sagalai of Skanda.

Genetic study shows out of India migration to Europe 26,000 years ago - http://jayasreesaranathan.blogspot.in/2016/02/out-of-india-migration-to-europe-26000.html

I happened to read about the practice of naming children as "Pulli" in Telugu speaking community that once lived in north of Madras. The source of this is "Indian Antiquary", volume 10, published in the year 1881.

The practice until the 19th century was to name the child born after the death of its older sibling, as Pulli. For boys, the name is "Pulya" and for girls the name is "Pullama"

Pulli-akalu is a leaf that was used as a plate for eating food in those days. These are thrown out on a heap and when the child is born (after the death of the elder child), two or three of them are brought and placed on the child.

Naming the child as "Pulli" had another explanation among the people of those times. Pulli means hole. (In Tamil it means dot. The Kolam are made around the dots / pulli). The previous child is dead leaving a hole, and the new child has come to fill up the hole. Based on this rationale, the new child was named Pulli.

It would be interesting to know the kind of customs that Pulli people of Estonia followed.

I am tamil and my name is anuvalli but I split it and use it as Anu Valli for all official putpose putting Anu as first name and valli as last name. So it appears like that in my office email also. Few months back I met a person from Estonia who remarked that my name i.e. both anu and valli as well as anu valli are common names of people from his country and he actually thought I might be from his country before he met me. I have heard this same comment from people from Finland also. Just wanted to bring this to your notice here in connection to this post.

I like your writing both english and tamil and thank you for your hardwork as it helps educate and enrich the knowledge of people like me.

Interesting Ms Anu. If you have more info, please do share here.