Almost half way through the rainfall season, two rainfall supportive features have emerged as reliable ones, that were outlined earlier and subject to observation.
(1) The Megha and Meghadipati of the Year.

These two were discussed in the 1st article of this series. The Megha for the current year is Kāḷa megha and Meghadhipati is Mercury.

So far, rainfall in most parts of India had come from Kāḷa megha formation of clouds. Tamilnadu in particular received rainfall from this kind of Megha (Thunder shower). Mercury as the Meghadhipati of the current year plays supportive role for Kāḷa megha.

Inference:- When Megha and Meghadhipati concur with each other, the feature (rainfall or lack of it) indicated by them becomes the general feature of the overall rainfall scenario.

When these two planets move towards each other there had been a spurt in rainfall. The periods of closeness for this year was posted on 27th Dec 2016, in this link.

Now that we are in the third round of such closeness, we can expect good rainfall based on the past experience from the former two periods

Within this period, the planetary based rainfall supportive periods was posted on the same article on 27th December, 2016.

The following is taken out from that article:- 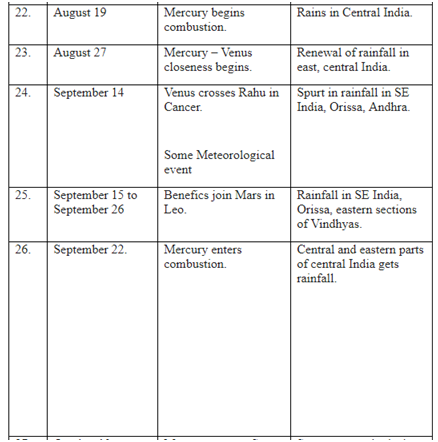 Inference:- Venus – Mercury closeness  is an unmistakable feature which this writer cross-with past data. Rainfall could have occurred in the absence of this closeness. But this closeness had ensured rainfall.

The astrological feature to be tested in September 2017.

Venus is the foremost planet coming to the aid of rainfall. Whenever it is moving ahead of Mercury and Sun, it is supposed to give plentiful rainfall. But this year it is behind these two for most part. However, a specific location of Venus in certain stars is supposed to give plentiful rainfall. This feature is going to appear in September and continue for some time.  This is the first time in my personal observation since last year, this feature is coming up and I hope it comes out true.

Till the end of year, Venus is going to be behind the Sun. Between 5th and 9th of January 2018, it is going to cross the Sun after more than a year. In a rainy season this could give heavy rains. But this feature coming in January makes me think that it would trigger heavy fog. Cloudy days observed in August (Tamil month of Avani) correspond to this period. The upcoming year could very start with cold and foggy nights. Places in Europe and the USA could experience heavy snowfall right from the middle of December 2017, when Venus- Mercury closeness begins.

Coming to the topic of this article:-

With Mercury in retrogression, these two planets seem to be moving towards each other. On 1st September they are 22 degrees apart. This gap narrows down up to 10 degrees on 14th September, after which they start drifting apart (due to end of retrogression of Mercury). By the end of the month the distance is 19 degrees which is within supportive range.

(2) Venus in the eastern sky in Magha, Purva Phalguni till the end of the month.

This begins on 15th September. This is supportive of rainfall. The increasing distance with Mercury (previous feature) is offset by this transit of Venus.

The stars transited by Mercury during these two periods cover Central India and North Interior Peninsular India. The 2nd part starting on 22nd September covers entire South India including Kerala. Kerala, so far a deficit State in the current period of monsoon, is likely to get good rainfall after 22nd September that would continue for a month. I am saying this based on past records of good rainfall during combust period of Mercury (applicable to Venus as well).

(4) Mars in Leo, behind the Sun and conjunct with benefics in the rainy season.

From 15th September onwards Mars is going to be joined with Venus and Mercury, the two benefic planets. At that time Mars will be behind the Sun. This combination occurring in Leo in the rainy season ensures good rainfall. This continues till 27th September when Mercury leaves the combination.

(1) All planets behind Saturn from 17th September. This will cause dry conditions.

No planets are present in any spoiling star in the Sapta Nadi chakra.
With 4 features in support of rainfall and only one as a spoiler, September is likely to see good rainfall. The following table is prepared on the basis of planetary conditions and applicable to India as a whole.

Inference:- Overall the planetary combinations are conducive for widespread and regular rainfall in the region starting from Vindhyas in Central India up to southern end of Peninsular India. The main features I am banking on are (1) the transit of Venus in the eastern sky in Magha and Purva Phalguni, (2) the closeness between Venus and Mercury and the (3) a repeat combust period of Mercury.

These rare features of rainfall are (1) transit of Venus in Magha, Purva Phalguni in the eastern pre-dawn sky and (2) Mars in Leo behind the Sun but along with benefics.

If this month finds good rainfall as written in the table above, I will attribute it to these two features. With these transits happening in Magha and Purva phalguni, all the regions in and around Vindhya range and the regions to the south of it are indicated as beneficiaries. 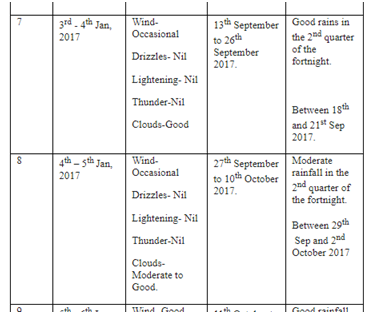 The dates in this table are not supported by daily Garbottam that I watched (in the corresponding period in March-April). But this table corresponds with planetary table (above).

Putting them together, it is inferred that night time Garbottam would cause rainfall in the indicated period of the above two tables. What I watched was the conditions during day time. There is no way to watch the Garbottam that occurred at night. Night time Garbottam gives rainfall during the day time. Last month, it rained during the day time (late afternoon) on many days which did not show up as Garbottam in my chart. So it is understood that Garbottam clouds were present at corresponding dates at night time.

Am waiting for your NEM forecast 2017

Will be writing it after 20th as I am out of station on a long trip.