Sharad Purnima celebrated on the Full Moon day in the month of Ashvin is generally believed to be a harvest festival or autumn festival and better known for Krishna’s Rasaleela. Though Lakshmi is worshiped on this day, the celebration of this festival mainly in Gujarat and places closely associated with Krishna shows a connection with the life of Krishna. A closer look at the religious austerities and rituals done on this day reveals unexplored events connected with Krishna’s life but found hidden in a couple of verses in Rig Veda. This also shatters the popular belief of the Indologists that there is no reference to Krishna in the Rig Veda.

To understand this better let us start from how Sharad Purnima is celebrated. People observe fasting from the morning of the day of Full Moon till the next morning. A peculiar feature of the festival is the food offered at the time of this festival. It is simply a bowl of milk kept in the open under the moonlight such that that the rays of the Moon enter the milk. People stay awake throughout the night and break the fast at sunrise next morning (setting of moon) by partaking the milk kept under the moon. Nowadays milk with rice flakes and milk sweets are offered in the place of plain milk. But the rationale of the day suggests that only plain milk must be offered.

The rationale of the day is such that Moon joins the star Ashvini on this day. In other words, if you are looking at the moon in this day, you will be actually looking at the part of the sky where Ashvini-star is located. Ashvini signifies the Ashvini twins, the Vedic Gods. Moon is known as Soma and it signifies milk. Soma is an offering made in Vedic yajnas. With the earth coming in line with the Moon (Soma) and the Ashvin star on the day of Sharad Purnima, it looks as though Soma is offered to Ashvins, the Vedic Gods. 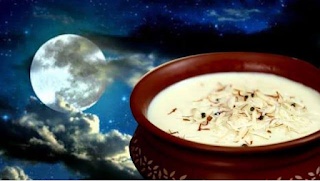 This once-in- a- year event is the most opportune time to worship Ashvins through the medium of Moon. This is done by capturing the image of Moon in milk kept in a vessel as an offering to Ashvins.


When the image of the moon is reflected on the milk with Ashvini star in the backdrop, it is as though the worshiper is able to offer ‘soma’ – literally meaning ‘extract’ – here the essence of Soma, the moon in the milk.  This looks like the most basic way of offering Soma to Ashvins in the absence of Yajnas these days! This tradition found in vogue in regions connected with Krishna is indicative of an olden practice of offering soma to Ashvins by Krishna and those in the lineage of Krishna.

Two verses in Rig Veda (8 -74.3 &4) do make a mention of Krishna invoking and calling Ashvins to accept the soma juice offered by Krishna. Sceptics may say that this is not the Krishna of Dwaraka, but one must know that Krishna was known to have stopped the Indra festival and therefore could not have offered soma to Indra in the yajnas he performed. Then whom else he could have offered soma?

Generally Indra was the one receiving soma juice in the yajnas. Other deities also had taken their share in the Soma, but never were the Ashvins allowed to take soma. Scriptures say that Indra had always forbidden them from taking the soma in the yajnas. Sage Chyavana was the first one to have offered soma to Ashvins in a yajna and after him the Kanvas were associated with the offer of soma to Ashvins. The Ashvins are invoked in many verses in the Rig Veda but in two verses, Krishna is mentioned as calling them to accept the Soma juice.

Krishna was known to have stopped the worship of Indra and ushered in the worship of cows and the hills as they were giving wealth to him and his fellow beings, the Vrishnis. It seems that Indra was replaced by Ashvins in the yajnas of Krishna and his clan from then onwards. Even earlier, Yadu, the progenitor of Krishna’s race is mentioned as having offered soma to Ashvins. (Atharva Veda 20-141-4). This establishes the fact the Yadavas had patronised Ashvins and Krishna had revived the tradition after abandoning Indra in the Yajnas.

There is nothing mythical about Ashvins replacing Indra if we look at the celestial combinations on the days of relevance to these two deities. One is Indra festival and the other is Ashvin festival - to name Sharad Purnima as a comparison for our discussion here. Indra was not in good terms with Ashvins according to scriptures. Both of them were capable of giving wealth, Indra by means of rainfall and Ashvins by giving health in their capacity as physicians.

The timing of Indra festival is very much available - of all the places, in Tamil lands of yore. Reference to this is found in olden Tamil texts such as Silappadhikaram and Manimekalai. There were also references to failure of rainfall in the years when Indra festival was not conducted. So rainfall was always connected with Indra, not like how western Indologists look at Indra as an Indo-Aryan God comimg in aid of Aryans in their wars. In the Chola land of Pumpukar, in the southern most part of India, Indra festival was a 28-day celebration that started after the Kaama festival (Holi festival of today) and ended on Chaitra Purnima – the Full Moon of Chaitra month. Chaitra Purnima marks the crux of Indra festival.

This timing (Chaitra Purnima) has an amazing link with Sharad Purnima, the day Ashvins receive soma. This occurs exactly at the opposite side of Sharad Purnima! The following illustration shows both the occasions which are the reversal of each other. 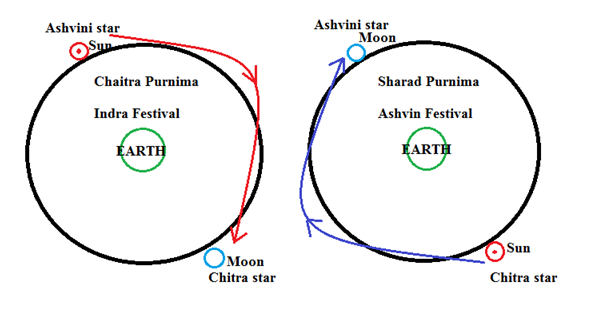 On the day of Indra festival, i.e., Chaitra Purnima, Full moon forms a coupling with the star Chitra whose lord Tvashta was the celestial builder for Indra’s Vajrayudha (rainfall). Tvashta also happens to be the guardian of Soma. A festival for Indra on this day is like offering Soma to Indra. Propitiated well in this way, Indra ensures rainfall in the next six months that ends up once Ashvin month starts.


Indra’s benefaction is no longer required now. But the world must go on with other types of benefits.

It is here Krishna’s utterances are self-revealing. According to Harivamsa Purana, Krishna says ‘let the Gods worship Indra and let us worship the hills.’ Krishna lived in a place of plenty of water from rivers (Yamuna) and therefore was not really dependant on rainfall (Indra’s favour). The green covered hills and cows were the real wealth for him and his people. So he preferred to offer Soma to Ashvins, the healers of every kind of illness, particularly blindness, on the day Soma clasps with Ashvini star. That was the day of Sharad Purnima.  With northward swing (Uttarayana) occurring in that phase, Krishna had found Ashvins to be the ideal Gods to lead mankind from darkness to Light.
What he did by way of Vedic Yajna seems to have been transformed into mundane festival capable of performance by ordinary folks. Though variations have occurred with the passage of time, Krishna is still being remembered on this day for Union with Him through Liberation (Moksha) enacted by Rasaleela.

Before concluding, it would be appropriate to highlight two issues vitiating the understanding of our past. One is that it is wrong to say that Rig Veda does not mention about Krishna. Apart from the 2 verses in the context of soma to Ashvins, there are four more verses on Krishna and his offspring in Rig Veda that establish beyond doubt that Krishna was a reality and that he was praised by the Rig Veda (to be discussed in another context). Another issue is about who Indra is. Aryan Invasion / Migration thoerists interpret Indra as a friend of Aryas and enemy of Dasas.

Interestingly there exists a Rig Vedic hymn in praise of Ashvins as those who accept the offerings of Dasas (8.5.31). Here lies the hint on why Indra and Ashvins were always hostile to each other. The hostility is because they lie on opposite ends. When Indra is in full form, the dasas suffer – the dasas being ordinary folks whose habitat gets flooded and destroyed by rains. It is for this reason Krishna had done away with the worship of Indra. In regions where rainfall causes havoc but can be replaced by other options for livelihood and wealth creation, Ashvins were favoured. The worship of Asvins by Dasas seems to have evolved into much simpler ways of worship in the name of Sharad Purnima as it happens now in the regions of Krishna’s connection. This year’s Sharad Purnima is on 23rd October 2018 with Full Moon occurring for most part of the night of 23rd.

It shows spread of culture from India to Greece. So far posted 31 articles under the label 'Greek astrology vs Vedic astrology'. Click here to read them all http://jayasreesaranathan.blogspot.com/search/label/Greek%20astrology%20vs%20Vedic%20astrology