Dr B.V. Raman, the notable
astrologer of yester years, in his book,

‘Notable Horoscopes’ published in the year 1956,

has constructed the horoscope of

other records of Indian origin.

krishna was born on

(Krishna janma bhoomi at Mathura in the picture below.

The birth place is close to below the white domes of the dargah!

The janma bhoomi is without gopuram or dome!!) 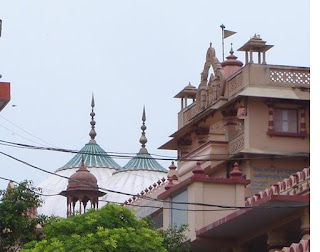 Here are some of the interesting notes from his prediction.

The beautiful appearance of ,

and a sky-blue complexion are attributed

to the delicate blending of martian, saturine, venusian

His lagna is Taurus. The exalted moon in Taurus

aspecting saturn in the 7th indicates

in the 3rd house of courage ensured

Mercury (buddhi karaka) was in exaltation in the 5th and

jupiter (vidhya katraka) was in 4th in Leo

B.V.Raman tells about how he arrived at the birth date

by relying on the death date.

His computation is based on scriptural information

on His death and the corresponding planetary position

that were to be arrived at to stand scrutiny

to match ’s life and personality.

In this regard B.V.Raman chose to

differ from the computation made by

B.V.Raman relied on the information

The year and day on which passed away

marked the commencement of Kali yuga

which took place on BC,

corresponding to the 1st day of the

This is further corroborated by Bhagavatham ()

which says that Kali entered immediately after
shuffled off his mortal coils.

Subtracting the life span of from this date,

B.V. Raman arrived at the birth date of .

it is inferred that was born at ,

on the 8th lunar day of the cyclic year Srimukha,

in the 126th year counted backwards from the

date of commencement of Kali yuga.

According to B.V. Raman,

the horoscope computed at this time

shows the position of planets in accurate degrees that

tally with the life and characteristics of .

Kethu is the mokshakaraka is in the 9th from the Moon

and aspected by the martial planet Mars.

This is seen as the factor

by B.V.Raman to decide the timing of Gita.

at the fag end of Kethu dasa in the battle field

(implying that Gita could not

have taken place at any other place).

The remaining dasas of passed off peacefully and were eventless.

It was with the dawn of Kuja dasa, that

dissensions started appearing among the yadavas and

shed His mortal coil in the maraka of Mars in

consonance with the nature of mars,

by being hit by the arrow.

Two questions of interest come into my mind

as I read this information.

One is whether the horoscope
indicates that had many wives.

B.V. Raman thinks so, indicated by His horoscope.

The clubbing together of kalathrakaaraka Venus and the 7th lord

Mars with Rahu explains this.

But as Venus is nearer to Rahu and away from the sensual Mars,

His love for His wives had no tint of carnality

as He was free from attachment of any kind.

Though “associated with Prakriti He was never affected by its qualities.”

Birth in the sign of Venus no doubt endowed Him with

a vital nature but it was under conscious control.

Another question is whether He too comes under the influence of planetary position.

I can only think of

two explanations. Planetary positions are only

as retold by Bheeshma in Mahabharatha

while telling about the factors that affect a person’s life.

He has created and made astrology a sastra

indicatory of time and events.

He adhered to it by ‘squeezing’ Himself into the formations and characteristics so indicated.

Secondly, did not Rama and Sita put themselves under

unbearable circumstances and called it ‘karma-gathi’

at many places in Ramayana?

When born in human form, even the Gods lived like humans

These ‘acts’ lighten our distress
of mundane nature and make it appear as dew that is
soon to be wiped out by His gleam!

With all Krishna Lovers who are reading this article I want to share something very special. There is divine event which is going to be held at Gurumaa Ashram, Gannaur, Sonipat(Haryana), Delhi, India.
Listen and get the essence of Bhagwad Geeta http://www.gurumaa.com/bhagavad-gita.php by world famous Spiritual Master Anandmurti Gurumaa Ji. Elaborative Explanation on each salok of Bhagwad Geeta by Gurumaa Ji herself. For more information you can login to www.gurumaa.com .