No Aryan – Dravidian divide. It was one Aryavartha (23)

From Adicchanallur to Sembiyankandiyur burial urns - It is Vedic practice only. 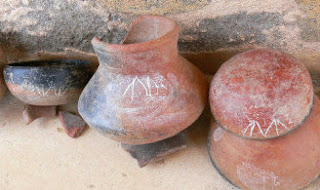 “Designs and markings
Full-shape pots had the graffiti depicting a fish, a ‘damaru’, sun, star and a swastika. Geometric designs and marks depicting fish, sun and star and graffiti marks are often found on black-and-red ware and black ware, with the symbols sometimes repeated.”

It must be noted that the 2 verses in PuranaanUru

which are set as requests to “kalam sei vEL kO” ( potter)

but nothing about what decorations to be made on the pots.

do not portray any special designs.

But the specific designs noted on those pots do speak of another story,

if we are to integrate the different practices in vogue in those days.

The designs of fish, trident (arrow-like) and swastika

are the ones noted and used in

“diksadhana” in vastu sastra – in determining the directions.

The directions are found out and noted by means

In the absence of modern equipments and even a compass,

people in those days used cones (gnomons or shanku or conches)

to decide the directions.

Any location is noted by shanku-sthapana, by placing the cone / conch / shanku

to identify the east and western directions

by the sharp trident or arrow like shadow falling on the ground.

Once the east and west are determined,

In the central to all these, the swastika will be placed-

as an indication of womb or central location.

The trident / arrow-marks on the burial pots

resemble the fish lines of dik-sadhana of vastu sastra.

In the absence of any mention of decoration or design on the pot in the sangam texts,

I am drawn to look at these designs

as those used to fix the location for burial.

how these pots were buried

and in what directions these designs were seen when they were excavated.

It is probable these markings were made to fix the direction of burial and the related rites.

Another information from PuranaanUru is that

very big burial urns were made to bury the dead body.

But these were done in the case of people who died under drastic circumstances.

One may be tempted to say that this is unique for Dravidian culture or Tamil culture.

But it is not so.

The Vedic culture approves of both burials and cremation.

were common in Vedic times.

Cremation was done in the case of death by natural causes.

But burial was recommended in the case of death by unnatural causes.

The abnormal deaths that require burials are mentioned in Garuda Purana 40:4-12.

Those who died by fasting, by accident, by suicide, by murder,

by animals, by arson, by a curse, by cholera or

any disease, fall from a mountain, tree or any height,

drowning, death by muggers or robbers,

by snake bite, struck by lightning, murder and persons who are great sinners

There is no rite of cremation, no tarpan, no sraddha and no asaucham

But the relatives were required to do “Narayana bali”

anytime between the 11 th day to 6 months after death.

The details of these are found in Garuda puranam

and are still followed in .

The rationale is that in the case of normal deaths,

the transformation to sapinda level (read my posts on Pithru tarpan) happens automatically.

But in the case of sudden deaths, such a transformation does not happen.

So there is no need to cremate the body and start the rituals.

Burial is done in those cases to allow the Mother earth the absorb the body.

The release to sapinda level is done through sapindee karana as per Narayana bali,

since it is Narayana who is in all and in Narayana everything thrives.

who have died under unnatural circumstances

In verse 231, Ouvaiyaar mentions that she does not know whether

Nambi Nedum chezhiyan would be cremated or buried.

These show that both the practices were there and that

it was also a matter of choice or decision whether to bury or cremate.

How this choice was made is understood from vesre 239.

When a person died in war,

the practice was to cremate him at the spot he died, by antyeshti ceremony.

This was how Ravana was cremated with the skin of a sacrificed goat spread on the body.

Burial stones were erected on the spot where the person died of valor in a battle,

with red flowers and peacock feathers decorating the stones.

The dead person’s name was inscribed on the stone.

We find numerous such stones all over Tamilnadu.

There are numerous references to this in the sangam literature too.

at the place of death, with a burial stone erected on it.

This is inconformity with Vedic practice of burying those

who die due to daggers or sword.

In verse 239 of PuranaanUru the poet makes a unique note

that whatever be the way the king was to be laid to rest,

- by cutting his body and burying it in a pot

- or by consigning his body into flames

his fame would live for ever.

for a king or a person of valour due to causes other than dying in the battlefield.

he had died in war field and only then his body was buried.

It was for this reason in verse 239, the poet says that

they may cut the king’s body and bury it

or may just cremate it.

This indicates that in sudden death by un-natural causes,

burial was done – as indicated in Vedic practices.

Huge urns were made for such burials.

and meaning: metal casting workshop (with furnace). The pots might have been used to transport cast metal (ingots). Cf. d.ha_l.ako = a large metal ingot (G.)