Does Nariman mean to say that Babri masjid destruction is justified?

Once destroyed little or by some measures,

can such a structure be doomed to meet its total annihilation?

Nariman seems to mean so in his arguments on Ram sethu

yesterday in the Supreme court.

“According to the document, Lord Ram broke the bridge into three parts.

Anything that is broken is not a bridge.

We cannot worship something that has been destroyed.”

If destroyed places / structures are unfit for worship

and therefore can be destroyed fully

why was the hue and cry raised for the demolition of Babri masjid?

If Ram sethu can be destroyed because

it had already been destroyed by Rama

and therefore is no longer fit for use for worship purposes,

the same logic is applied to Babri masjid too.

No worship was done there,

making it fit to be destroyed.

Again since it is destroyed now,

no need to worry about its sanctity and we can do anything with it now.

Will Nariman say that it is right to destroy Babri masjid

as it was not in use for worship?

Will he accept this inference from his own reasoning?

Looking from another angle,

while the ASI is not removing the tombs constructed

too close to the non-rusting Iron Pillar

(the only marvel of its kind in the world)

by the Muslim rulers with an intention to deface the structure,

but retaining the status quo with reference to those structures,

why allow damages to Ram sethu

which has now been accepted by the Government

as having existed but destroyed by Ram himself (according to it)?

that Ram sethu was not man-made,

that is again a justification by itself

that such natural formations must never be destroyed. 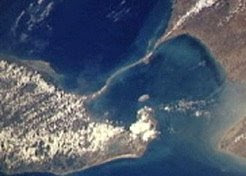 Whether Ram destroyed it or TR Baalu wants to destroy it,

a unique structure such as Ram sethu

deserves to be preserved.

This is what any right thinking person will say or do.

In addition, a mammoth of evidence exists

on why it must be protected.

“It is Rama leela;

now even the atheists accept Rama, while denying Setu.

All for a few crumbs from offices of profit held and bogus, disastrous projects dreamt.

Why try to defend the indefensible?

Why deny the rashtram, the nation, for the sake of a few individuals' prestige and pelf?

Now the Union of India is arguing: Ram exists, Ramayana exists, but Rama Setu does not.

Without Rama Setu, Narimaan, there is no Ramayana,

no victory over adharma, asuric forces.

Why this display of casuistry to pamper to the coalition atheist partners?

Narimaan, who replied in positive to the Bench's remarks

that issue of faith has to be accommodated in going ahead with the project,

however, was not in agreement with the opponents that alignment number 4

(from Rameswaram to Dhanushkodi) was a viable alternative.

"The suggestion to go for alignment 4 is a self-defeating argument.

Alignment number 4 has been suggested as an alternative.

If it will be so, there will be no way to go to worship near alignment number 6 (Rama Sethu)," he said.

This argument of Narmaan is specious.

He should be reminded of bridge, Pamban bridge, bridge

which are cantilever bridges which allow ships to pass through

while allowing people to cross over to the other side of the land-based canal or backwatersl.

NO alignment is viable according to the petitioners.

The mid-ocean channel project itself should be scrapped.

However, for the sake of argument --

to cross from Rameshwaram to Dhanushkodi.

So, Narimaan's is a self-defeating argument that pilgrims cannot go to Dhanushkodi.

GOI can build good roads and bridges as needed for pilgrims

to go to worship Rama Setu.

Check with scientists, they will find answers if only the right questions are asked.”

: The Centre has told the Supreme Court

that there is no reason why the controversial Sethusamundram Shipping Canal Project cannot go on.

who were loyal to it in Tueday's crucial trust vote.

The DMK has been demanding that the project should be implemented at the earliest.

have argued that it will destroy remnants of a bridge

However, the Government has argued in court that such a bridge cannot exist

and to support its claim,

it has referred to the Padma Purana in Ramayan

which mentions that Lord Ram destroyed the bridge built by him

using his magical bow and arrow.

Last time when the matter was in Supreme Court,

the court had asked the Government whether

there was any way possible for the Government to look for an alternative route.

The Government had then told the court that

the present alignment was the best they had for a shipping channel.

The court also wanted to know whether the Government had done

any study to find out whether the Setu was an ancient monument or not.

This is a count on which the Government still has to answer the court.

and the project told CNN-IBN that he will take up the case in court.

He said, "Personally I find it very ridiculous.

because the BJP has started it, and now they have graduated to Lord Ram."

"According to the Padma Purana, Lord Ram made a hole in the Setu

from being invaded. The UPA's is an argument which has no support in the wider picture,"

He said it was attempt to please the DMK as well as some "international forces".

"This is a deliberate attempt to play around with Hindu sentiments.

They are now saying Lord Ram destroyed the Setu

that Tulsi Ramayana and Valmiki Ramayana had no historical evidence

or scientific proof to corroborate their statements."

Posted by Dr Jayasree Saranathan at 10:34 AM