While this by itself is an amusing contradiction,
the loving grand father agreed to release the audio,
as it is the first ever song sung by his grand son!


The 'Perumal' in the film made me look forward to
knowing what he spoke on that occasion
and I was not for disappointment!


Karunanidhi, the patron for Tamil language
insisted (again) that Tamil culture must be safe-guarded by naming the movie in Tamil.
(Don't mind if such a film has dialogues like ' saavu grakki, voottulu sollikinu vandhuttiyaa?")
His government has been giving subsidies to the films named in Tamil.

But look at the persons involved in this occasion.
What a Thamizh-maNam in their names! 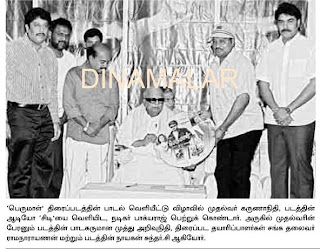 'Karuna' 'nidhi' is giving the first copy to 'Bhagya' 'raj'.
The song had been sung by his grand son, Arivu'nidhi'.
The producer is 'rama' 'narayanan'.
The actor is 'Sundar'!!!


I feel like changing my name as "Vettri-ch-chelvi".
(safe-guarding Tamil)
Any gifts for me?
Posted by jayasree at 12:35 PM

வெற்றித்திருமகள்!
i was hoping to see a post on this "kamba ramayanan evidence " to establish that rama setu was destroyed by rama himself!

Thanks for the correction - sri=Thirumagal.