Not a monument? - Ram Sethu is World heritage!

The Centre on Tuesday told the Supreme Court that

it had already come to a conclusion that Ramar Sethu

does not fulfill the criteria for being declared a national monument. 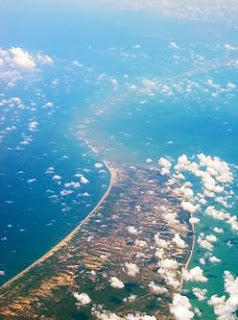 Ram Sethu as seen from the air.

"As far as we are concerned, the stand of the Government is very clear

that Rama Setu could not fulfill the criteria of national monument,"

This declaration is anything but outrageous.

Can Mr Nariman or the Government spell out the basis

on which Ram Sethu could not fulfill the criteria of national monument?

Has the ASI done any study at Ram Sethu and arrived at this conclusion?

to even make a prima facie determination

that the said formation could be an ancient monument

entitled to protection under the Act.

The ASI also claims that it has not undertaken any study in this regard as yet.

Does Mr Nariman mean to say that in the intervening period

(after September 2007 when the ASI made this known),

the study has been undertaken by ASI

and the conclusion has been arrived at

that Ram Sethu can not be declared a monument?

are restrictive in application

and the Government which sees everything through communal colour

lacks the wisdom to understand this country’s rich past.

Look at the following rules for the qualification of a monument.

It looks like a lesson from a school book of board –

needing to be improvised and lacking in clarity

to explain its applicability in diverse areas.

According to The Ancient Monuments and

an ‘ Ancient Monument ’ is defined as follows:-

or any tumulus or place of interment, or any cave, rock-sculpture,

inscription or monolith which is of historical,

archaeological or artistic interest and

The last point seems to be applicable in Ram sethu.

But the most fitting action will be to declare Ram sethu as a World Heritage.

Be it natural or man-made, the formation of Ram-sethu is amazing and

its connection with Ramayana makes it unique culturally too.

The definition of what makes a structure world heritage is apt for Ram sethu.

“Heritage is our legacy from the past, what we live with today,

and what we pass on to future generations.

Our cultural and natural heritage are both irreplaceable sources of life and inspiration.

Places as unique and diverse as the wilds of East Africa’s Serengeti,

the Pyramids of Egypt, the Great Barrier Reef in Australia and

the Baroque cathedrals of Latin America make up our world’s heritage.

What makes the concept of World Heritage exceptional is its universal application.

World Heritage sites belong to all the peoples of the world,

irrespective of the territory on which they are located.

seeks to encourage the identification, protection and preservation of

cultural and natural heritage around the world considered to be of

For all the bungling it is making, let the Government of India

make efforts to declare this a world heritage.

New Delhi (PTI): The Centre on Tuesday told the Supreme Court that it had already come to a conclusion that Ramar Sethu does not fulfil the criteria for being declared a national monument.

"As far as we are concerned, the stand of the Government is very clear that Rama Setu could not fulfil the criteria of national monument," senior advocate Fali S Nariman, appearing for the Centre, told a Bench headed by Chief Justice K G Balakrishnan.

Further, on the issue of alternative alignment to avoid destruction of Ramar Sethu for the Sethusamudram project, he said, so far, he has not received any instruction from the Government.

Nariman said that would, most probably by evening or tomorrow, receive some instructions.

A day after making a strident argument that Ramar Sethu was destroyed by Lord Rama himself, the Centre had on July 24 changed tack and said that the viability of going ahead with the Sethusamudram project through an alternative alignment has been taken up at the "highest level".

"The suggestion for alternative alignment to avoid Ramar Sethu route has been taken as a special case. I have personally taken it at the highest level. It is being scientifically examined. I will come back to you by Tuesday or Wednesday," Nariman had told the Bench.