The Vamana avatara connection to Mahabalipuram!

and the marine archaeological dating of sub-mergence

gives credence to a greater antiquity to Mahabalipuram

and the Vamana avathara having taken place there.

The story of ’s victory over Banasura, son of Mahabali is part of Tamil lore,

in that the famous dance form mentioned in sangam texts and Azhwar pasurams,

namely the Kudakkotthu was performed by to secure

the release of Aniruddha from Banasura.

The related developments mentioned below indicate that the olden Mahabalipuram,

the inundations witnessed around the globe at the close of Kali yuga,

The marine archaeological dating coincides with end of Krishnavatara

and sub-mergence of Dwaraka and 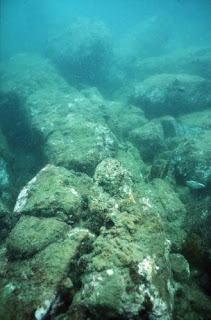 or rather a much recent history of Mahabalipuram.

Dis-regard to History had started even then, it seems!!

“This more detailed oral tradition - of a great flood that destroyed a city in the time of myth -- is supported by certain passages in Hindu scriptures, and is reported and commented upon extensively in Underworld, pages 120-122:

The God Vishnu had deposed a corrupt and wicked Raja of these parts at some unknown date in the remote past and had replaced him on the throne with the gentle Prahlada whose reign "was a mild and virtuous one".

Pralahada was succeeded by his son and then by his grandson , said to have been the founder of the once magnificent city of (which, translated literally, means "the city of the great " or more likely "the city of the giant ").

's dynasty continued with his son Banasura - also portrayed as a giant- but during his reign disaster struck:

Aniruddha, the [grand]son of Krishna, came to his [Banasura's] court in disguise and seduced his daughter, which produced a war in the course of which Aniruddha was taken prisoner and brought to Mahabalipuram; upon which Krishna came in person from his capital Dwarka and laid siege to the place.

Although the God Siva himself fought on the side of Banasura they could not prevail. found a way to overthrow Siva, captured the city and forced Banasura into submission and lifelong fealty.

An interval followed, after which another Raja - whose name was Malecheren -- took the throne at Mahabalipuram. He encountered a being from the heavenly realms who became his friend and agreed "to carry him in disguise to see the court of the divine Indra" - a favour that had never before been granted to any mortal:

The Raja returned from thence with new ideas of splendour and magnificence, which he immediately adopted in regulating his court and his retinue, and in beautifying his seat of government. By this means Mahabalipuram became soon celebrated beyond all the cities of the earth; and an account of its magnificence having been brought to the gods assembled at the court of Indra, their jealousy was so much excited at it that they sent orders to the God of the Sea to let loose his billows and overflow a place which impiously pretended to vie in splendour with their celestial mansions.

This command he obeyed, and the city was at once overflowed by that furious element, nor has it ever since been able to rear its head.”

Posted by Jayasree Saranathan Ph.D at 8:54 AM