Another 'Sethu' at Mahabalipuram!

The of “Sthala sayanatthu vuraivar”, an incarnation of Maha Vishnu

is also known as ‘Artha Sethu”. 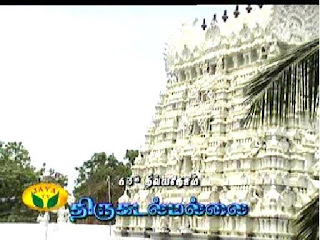 This temple is one among the 108 Divya kshethras and

which is one among the 8 different poses of Sriman Narayana.

This post is an exploration of why this place came to be known as ‘Artha sethu’.

Much to the discomfiture of the Sethu-haters of the present government,

‘artha Sethu’ as another name of this place.

“When the sage (Punadareeka muni) returned with food, he saw that the sea had dried up. In the place where the water had been, a beautiful figure was lying in recumbent posture. The sage realised that the old man was none but the lord himself. He placed the lotus at the feet of the Lord. Because the Lord touched the sea for bailing water, it is now called "Artha Sethu"."

makes me think that it must be ‘ardha Sethu’ not ‘artha sethu’.

In Sanskrit, Ardha means half.

Since the sthala purana connected to Thirukkadal mallai is

lying on the shores of Sethu on a 3-day penance,

this name could have come into vogue.

The similarities are as follows:

(1) The posture of Sthala sayanatthuraivar at Kadal Mallai is similar to Rama's posture at Sethu,

facing the sea in the east and lying on the ground with the right arm as his pillow.

Valmiki's narration of this defenseless posture is moving.

The comparative narration of Rama's posture can be read here.

(2) The usually present snake bed is not there for both Rama and Sthala Sayana perumal.

(On the contrary, Rama at ThiruppullaNi temple (Dhanush Koti) is on snake bed!)

(3) No weapons in hand at Kadal malli posture and

also in Rama's posture on the 3 day penance at Sethu.

The hand and body have no weapons and jewellery in both cases.

(4) Both cleared the water at the place of sayana.

Rama moved off the water by constructing Sethu

and Sthala Sayana Perumal dried the water at Mallai

(for the sake of Pundareeka maharishi)

(5) Bhagawan touches the sea water at both places.

(6) At both the places, his consort is not seated close to him.

In any lying posture of Perumal (on snake), his consort will be accompanying Him.

His consort (Lakshmi) will be seated at His feet on a lotus or on the snake bed itself.

In Kadal Mallai, she is not seated near Him. She is in a separate sannidhi.

When Rama was lying on the ground at Sethu, Sita was not with him.

(7) The consort at both places was not seated on the ceremonial chair or lotus.

They both were seated on the ground.

At Kadal Mallai, the consort is known as "Nila- mangai Thaayar"

for her very posture of sitting on 'nilam' (bhoomi or gound)

When Rama was lying on the ground at Sethu,

Sita too was sitting on the ground in her confinement in Ashoka vana at Lanka.

Sita was not known to have seated on a chair or some aasan during her confinement.

Going by these similarities, I think people would have in course of time

If it is ‘artha’, then ‘artha sethu’ would mean a bridge to prosperity or wealth.

I have not come across any clue to suggest this.

(Inputs are welcome from readers)

I went through the pasurms of Azhwars on Kadal mallai

to see if they have indicated ardha sethu anywhere.

Here it is just mentioned that

the one who shot a series of arrows to kill Ravana of southern Lanka,

so that his body is to be eaten by animals

and who also knows the ancient four Vedas, 5 homas and 6 vedangas

that is surrounded by beautiful trees (solai)

But then he sees in this perumal other avatars too, including Kalki.

So we can not consider reference to Rama as anything special.

The following are the verses on Kadal mallai from Nalaayira Divya Prabhandam.

In all 27 verses are there.

But nothing to suggest Sethu.

This shows that the similarities between the Kadal malli perumal

and Rama on a penance at Sethu

could have been noted in later days leading to frequent references

to Kadal mallai as sethu.

In that way, this name 'artha sethu'

could have become popular.

There is also a possibility that the name was given by some patron kings (pallavas).

We must look for some inscriptions or carvings in and around the place to ascertain this.

There is another way of looking at this.

According Vaishnavite belief, the present temple is one among the 7 temples of Vishnu

on the shores of Mahabhalipuram.

about the temple much inside the seas – now submerged.

The recent discovery of a sub-merged city off Mahabhalipuram not only strengthens this view,

as the sthala puranam is about the Lord making an opening in the sea,

but also raises possibilities to give credence to the oldest story connected to Mahabalipuram,

namely that of Vamana avatara having taken place here.

was outwitted by Vamana.

It is possible to say that the oldest temples here were connected with Vamana avatara.

One estimation of the time period of these temples,

based on date of submergence is 4000 BC.

A lot more research is needed to be done in this area.

Tracing the origins of the name "Artha sethu".

in the extended land into the sea,

could have stood as an abode for prayers of ‘artha’ (wealth).

A full fledged Sethu connecting 2 shores will relieve one of all paapas.

This is about Ram Sethu connecting the Indian main land with Lanka.

in the form of wealth and prosperity.

But what is indisputably made out form this is that

‘Sethu’ or bridge on the sea

had indeed existed for long at Rameshwaram.

Whenever and wherever people come across any instance of Bhgawad-leela

of parting off the seas / waters or making way in the sea,

‘Ram-sethu’ lurks in the mind of the people.

It is hard to erase Ram-sethu’!!