Other names of Saraswathy.

The names of Saraswathy are given in the Tamil thesaurus

Choodamani Nigandu (1925 edition).
The verse giving those names is from chapter 1- 35 in Deva-p-peyar thogudhi.
The verse is as follows:- (Spacing is done by me to show each name)

Of these two names 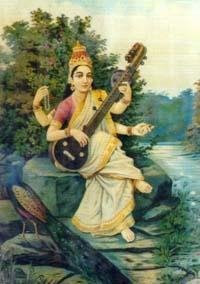 The root word is 'vaarthal'.

This word is used in the context of picking up something

from a larger volume of that something and offering it.
Like 'neer vaartthal'.

for this 'vaartthal'.
When some part of a thing is drawn out from a larger volume of that

Coming to the next name VaaNi.

This is also found in the Nigandu.

Though I have not yet come across the exact word "vaaNi'

in the olden texts that I have read so far,

I can however give the connections,
from the nigandu (solla-p-paduvadhaal VaaNi) meaning.

is found in olden texts, thereby establishing their usage in those times,

then we can not doubt them.
There must be some rationale behind them.
In such cases, we have to explore the rationale and

understand them in the context.

In this way, I think VaaNi is very much a Tamil word.
We have the meaning given in Nigandu as 'solla-p-padubhavaL'.
This meaning is similar to Gayathri

which is also found as a synonym for Naamagal in the Nigandu.

The root of VaaNi can perhaps be understood from
the expression "paaNi" in Silapapdhikaaram,

There is Deva paaNi - whcih means songs in praise of devas.

(Tol kaapiyam - PoruL- 350)
This has 2 versions - Perum deva paaNi and Siru Deva paaNi.
There are further sub divisions in these two and Kaanal vari of Silabhu

is one among the PaaNis.


This 'PaaNi' is the root of 'PaaNan'.
In my opinion this PaaNi has become VaaNi.
The proof I quote to substantiate this is
"vaaNan pErUr" in the same chapter in Silappadhikaaram (line 54)

The VaaNan here is BaaNaasuran.
The pa/ba (having no difference in Tamil) is interchangeable with

how Vaaniyar is a derivative of Bahni- Vahni

The 'Veena pusthaka PaaNi' (Mahakavi Bharathiyaar)
is the root of the word VaaNi.
She is VaaNi as she is being spoken / sung by Veena and books

( for being the signifactor of these)

that Paanars used to get (there are 6 verses in Puranauru saying this)
and the Paanar's habit of wearing White lotus on their head.